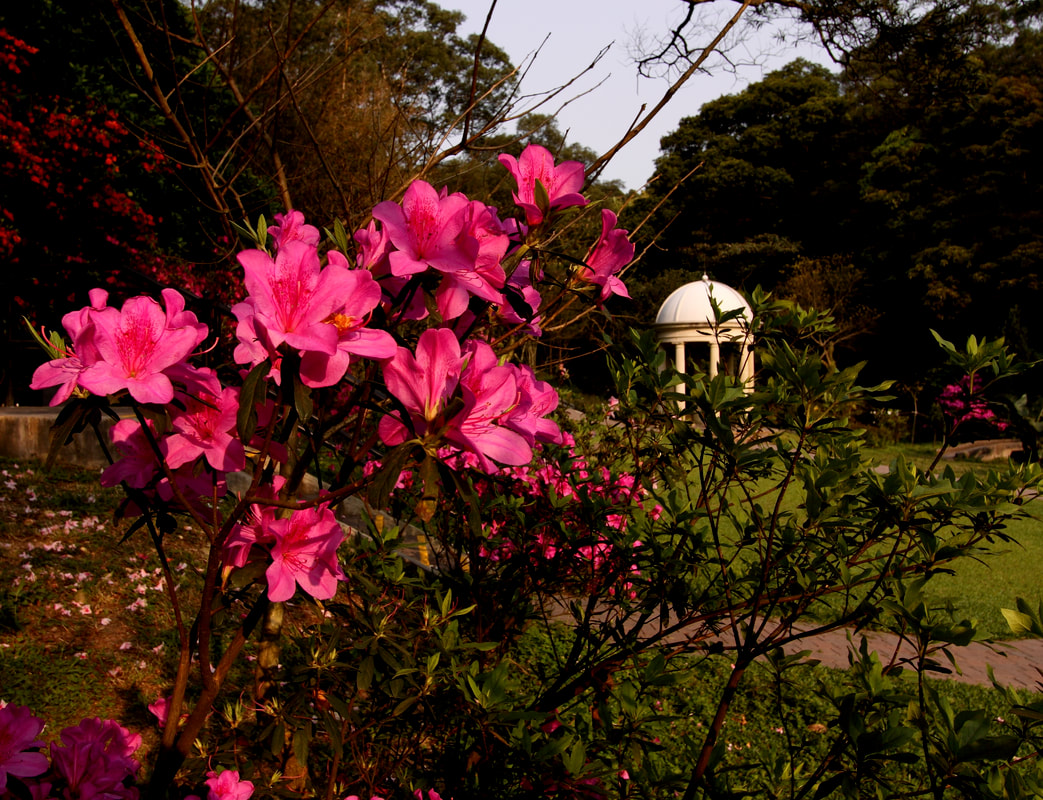 Victoria Peak Garden
THE PEAK
Victoria Peak – or simply the Peak, as it is more usually called - is one of Hong Kong’s major tourist attractions. This is largely because of the excellent views it offers over the modernistic city immediately below, as well as -  on a clear day - Lantau Island off to the west and Tai Mo Shan, the highest mountain in Hong Kong, to the north in the centre of the New Territories. The best viewpoints are along Lugard Road and most tourists walk the easy three-kilometre Lugard Road-Harlech Road circuit. There are usually some birds to be seen along here but the best birding spot is higher up around Victoria Peak Garden which is easily accessed along Mount Austin Road. 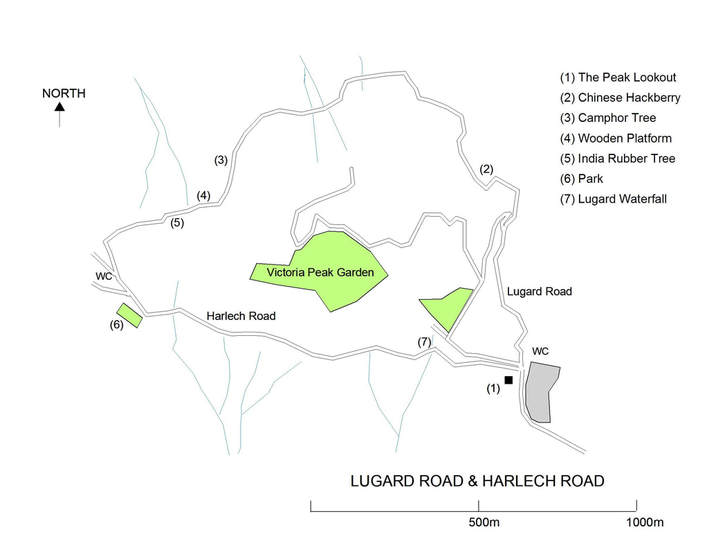 GETTING AROUND
Lugard Road-Harlech Road
There is an obvious  conjunction of paths (Harlech Road-Lugard Road-Mt Austin Road) near the restaurant known as the Peak Lookout (1) in front of the Peak Tram terminus. For views over the city, take Lugard Road to begin the anti-clockwise walk. You soon find yourself in the midst of lush vegetation.  Common resident garden birds such as Chinese Bulbul, Red-whiskered Bulbul, Oriental Magpie Robin, Common Tailorbird, Japanese White-eye and Cinereous Tit occur in the trees and you may hear Large-billed Crows cawing overhead.  Attractive Black-throated Laughingthrushes feed amongst the leaf litter on the woodland floor as does the shy Blue Whistling Thrush.  In winter you may also hear and see Red-flanked Bluetail, Pallas’s Leaf Warbler and Yellow-browed Warbler. In spring the Large Hawk Cuckoo can be heard giving its far-carrying and persistent “brain-fever” call.

Soon after a labelled Chinese Hackberry tree (2), the forest opens out into scrub and, unless the hillsides are veiled in mist, the high-rises of Hong Kong and Kowloon are visible below you.

Continuing along the trail, you re-enter forest where there is a chance of more forest birds including Silver-eared Leiothrix and Streak-breasted Scimitar Babbler. The landscape opens out again just after you pass a Camphor Tree (3), conspicuous because of its height and its fissured bark.  There is a wooden platform (4) which gives good views over the scrubby hillside. Although Black Kites are common around the Peak, this spot is especially good for viewing them as they often call and wheel over the vegetation at head-height. Chinese Bulbuls and Red-whiskered Bulbuls can be seen in this area throughout the year and Chestnut Bulbuls sometimes occur during the winter months. Where Lugard Road joins Harlech Road, there is a small park (6).  Red-billed Blue Magpies sometimes occur  in the vicinity and Grey-backed Thrushes feed in the leaf litter around the edges of the park in winter.

Along Harlech Road towards the Peak Tram, there is a wooded stretch with gullies below you on the right. These are frequented by thrushes in winter, mainly shy Grey-backed Thrushes. When the woodland opens out, you have a view to the southwest of Pokfulam Reservoir and further beyond that Lamma Island.

Victoria Peak Garden
Take Mount Austin Road uphill from near the Peak Lookout (1). The small playground after the first right turn is worth a look. Fork-tailed Sunbirds feed on the flowers here and winter visitors include Grey-backed Thrush, Daurian Redstart, Olive-backed Pipit and Yellow-browed Warbler. The best area, however, is Victoria Peak Garden and the Governor’s Walk which leads off from the garden. Resident birds to be found here include Red-billed Blue Magpie, Blue Whistling Thrush, Streak-breasted Scimitar Babbler and Black-throated Laughingthrush. In a good winter, thrushes will be present feeding on the lawns. Grey-backed, Japanese, Pale and White’s Thrushes are all possible. Other wintering birds likely in the vicinity are Yellow-browed and Pallas’s Leaf Warblers, Olive-backed Pipit, Daurian Redstart and Red-flanked Bluetail.

The area is, however, probably at its best during migration times in September-November and in April. Unfortunately, the area is now little-watched compared with the 1990s when I wrote “Birding Hong Kong – A Site Guide”. Then, it was the local patch of two or three regular birders who must have fond memories of those days. I wrote in my book:  “Regular observation in the past few years has revealed that the area is a prime site for passerine migrants, especially September through to early December. Various chats, thrushes, warblers, flycatchers and buntings can be seen at this time, and scarce/rare species are annual.... Siberian Blue Robin, Siberian Thrush and Radde’s Warbler are virtually annual here, and other rare birds recorded in autumn in recent years have included Tiger Shrike, Chestnut-breasted Rock Thrush, Red-headed/Black-headed Bunting and Fujian Niltava.”

I also noted that it was a good site for observing migrating raptors in autumn and mentioned October records (1993 & 1994) of Oriental Honey Buzzard, Common Kestrel, Black Baza, Grey-faced Buzzard, Western Osprey,  Eastern Marsh Harrier and Hobby.
GETTING THERE
The best way of getting to the Peak is to take the Peak Tram from the terminus in Garden Road. This is a 10-minute walk from Central MTR. Take Exit J2, cross Chater Garden and head uphill along Garden Road to the terminus. Note that this can get very busy, especially at weekends when long queues form. Best to go as early as possible to avoid the crowds. The first tram leaves at 7.00 a.m.

Bus 15 goes to the Peak from Exchange Square. The bus stops outside Admiralty MTR at Queensway.
Map and text adapted from "Hong Kong Nature Walks: Kowloon, Hong Kong & Outlying Islands".
All text and images on this website are  © David Diskin unless otherwise stated.