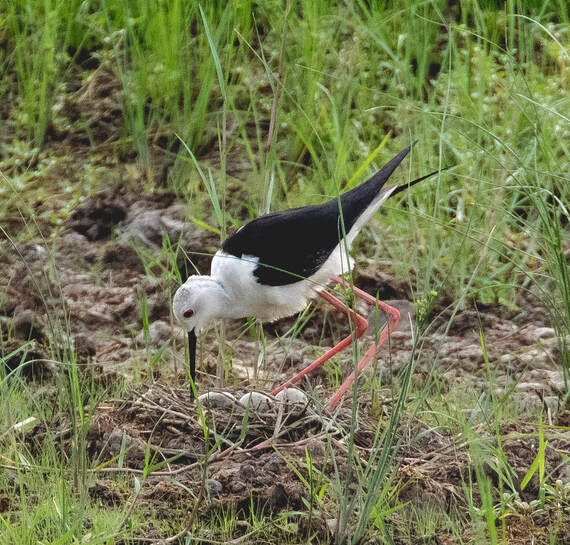 Black-winged Stilt at nest at Mai Po, 4 June 2020
Hot and sunny with winds from the southwest and temperatures up to 33⁰C. Occasional thundery showers most days until the weekend of 6th/7th when a trough of low pressure brought very heavy rain to the territory. A black rainstorm warning was issued in the early hours of 6th when up to 200 millimetres of rain fell in the New Territories. Rain on 7th was slightly less intense, although it didn’t feel like it at times; a red rainstorm warning was issued in the morning as over 150 millimetres of rain fell in Sai Kung, Sha Tin and Tai Po.

The Cotton Pygmy Goose that was first seen at Mai Po on 28 May remained until 1 June, a new late spring date. The summering Tufted Duck was seen on 1st & 4th. Three Oriental Pratincoles were noted on 2nd. A Slaty-breasted Rail was on the scrape (pond 16/17) on 4th; a pair usually breeds on one of the grassy islands, although they can be elusive. The scrape also holds breeding Black-winged Stilts with some adults sitting on eggs and others accompanying newly-hatched chicks out onto the exposed mud. One or two pairs of Greater Painted-snipes also breed on the scrape and can usually be seen with a little patience; up to three were recorded during the week. The Glossy Ibis that has been present in the area since 9th April (4th HK record) was also seen regularly on the scrape during the week, and lingering Black-Faced Spoonbills (ten on 4th, eight on 6th) were also present during the high-tide period. Shorebirds present at high tide included 177 Pied Avocets (6th), 71 Whimbrels (6th), two Bar-tailed Godwits (4th & 6th), five Red Knots (4th), three Great Knots (6th). Four Gull-billed Terns were still present on 6th.

Elsewhere, the Dusky Thrush that was first seen at Yuen Long Bypass Floodway on 19 May was noted again on 4th & 5th; this is the first time that this species has occurred in summer in Hong Kong. In the same area, a Eurasian Hobby was seen on 5th, with two there hunting flying termites on 6th, and a Black-winged Kite was also present on 5th & 6th.

Another Eurasian Hobby was seen at Lam Tsuen on 6th, and two Black Bulbuls and a Plain Flowerpecker were also there.
June 8-14
The trough of low pressure lingered past the weekend, bringing 100 millimetres of rain to Tai Po & Tsuen Wan on Monday 8th. This was followed by anticyclonic conditions over the coast of Guangdong that brought fine and hot weather for most of the week, with the temperature reaching 34.8⁰C in Sheung Shui on 12th. The first Tropical Cyclone Warning Bulletin of the season was issued on 13th; Tropical Storm Nuri hit the Philippines on 12th and then headed northwest towards southern China. Tropical Storm Signal 3 was raised in HK on the afternoon of 13th. However, the storm was mild and made landfall well to the west of Hong Kong on the morning of 14th.

There were further sightings of the Dusky Thrush at Yuen Long Bypass Floodway on 8th, 9th & 14th. The shy behaviour of this thrush, which was originally discovered by Mike Leven on 19 May, suggested the possibility of it being a wild bird in spite of the unseasonality of its occurrence. However, photos taken by Benjiman Li on 9th showed clear feather damage consistent with it being an ex-cagebird.

On 8th, two Cinnamon Bitterns – a male chasing another male - were seen at Lok Ma Chau. A single bird was seen at the same location on 11th.

On 10th, the scrape at Mai Po held three Greater Painted-snipes, 11 Great Knots, three Pacific Golden Plovers, two Bar-tailed Godwits, eight Grey-tailed Tattlers, a Gull-billed Tern, the long-staying Glossy Ibis, and ten Black-faced Spoonbills. An Oriental Reed Warbler was singing in one of the reed beds adjacent to the scrape, and a Tufted Duck was seen in flight at the northern end of the reserve.

On 11th, a Himalayan Swiftlet was seen at Lok Ma Chau.

On 13th, a Lesser Cuckoo was heard singing at Lam Tsuen in the early hours of the morning. A Bonelli’s Eagle was at San Tin. Twelve Black-naped Terns were in Sai Kung harbour. 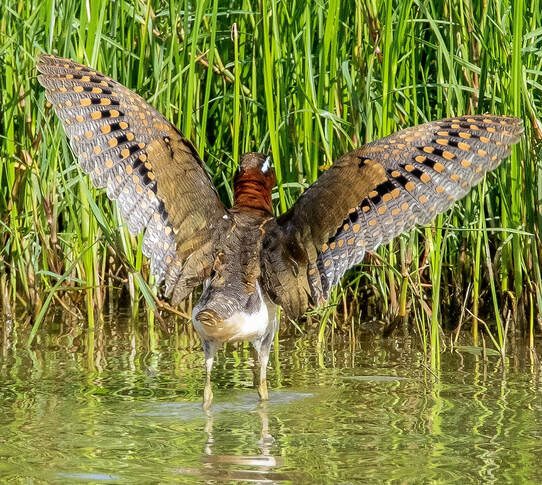 The frigatebird sp. off Peng Chau on 14th was actually photographed by a different observer from the original reporter (see http://www.hkbws.org.hk/BBS/viewthread.php?tid=29093 ) and can be identified as a juvenile Lesser Frigatebird.

Also on 14th, a Black-winged Kite was at Long Valley. The same bird was present on 15th.

At Tai Lam CP on 15th, two Hodgson’s Hawk Cuckoos and a Chinese Barbet were singing, and two Black Bulbuls were seen.

On 17th, six juvenile White-cheeked Starlings were at San Tin.

On 19th, Mai Po turned up a Chinese Spot-billed Duck, six Greater Painted-snipes on the scrape, including a male with two young chicks, 70 Eurasian Whimbrels, an Oriental Pratincole, two Gull-billed Terns, and 14 Black-faced Spoonbills. There was also a flock of 70 White-cheeked Starlings, a mix of adults and juveniles. Such a large flock of this species is unprecedented during the summer.

On 20th, a Collared Owlet was heard in Tai Po Kau, a Lesser Cuckoo was at Tai Mo Shan, and a Plain Flowerpecker was at Ho Pui reservoir.

On 21st, a Pheasant-tailed Jacana in breeding plumage was seen at Lok Ma Chau. A Chinese Grassbird was at Sunset Peak.
June 22-30
Anticyclonic conditions over southern China brought generally hot, fine weather to the territory, albeit with occasional showers. Temperatures remained in the low thirties (35⁰C at Sheung Shui on 23rd) and winds were from the south or southwest.

Not a great deal of bird news.

On 23rd a Lesser Cuckoo and a Malayan Night Heron were heard at Ng Tung Chai after dark.

On 26th, Tai Lam CP turned up two Hodgson’s Cuckoos, a Lesser Cuckoo and four Black Bulbuls. A juvenile Lesser Frigatebird was seen in Sai Kung harbour in the evening.

Two Lesser Cuckoos were heard at Tai Mo Shan on 28th. A Russet Sparrow was reported from Long Valley.
********************
Please note that these are unchecked reports. Records of rarities and of unseasonal occurrences may be subject to assessment by the HKBWS Records Committee. A checklist showing species  for which a description is required can be found at the HKBWS website - http://www.hkbws.org.hk/BBS/viewthread.php?tid=28893&extra=page%3D1
All images & text © David Diskin unless otherwise stated
dadiskin@netvigator.com