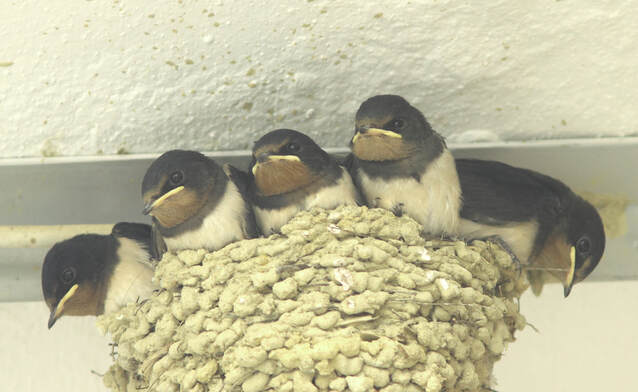 Young Barn Swallows at nest in June (Birding Hong Kong Archive)
​June 1-16
A hot and rainy first half of the month with maximum temperatures regularly in the low thirties.

The main bird of note was a juvenile Sooty Tern discovered at Kung Chau on 1st and remaining until at least 9th. This is the 11th Hong Kong record. Birders visiting the island to see the Sooty Tern turned up a number of other terns. Apart from breeding Bridled, Black-naped and Roseate Terns, at least ten Common Terns (eight tibetana, two longipennis), five Whiskered and a White-winged Tern were seen on 3rd, and a Greater Crested Tern, a 1st-summer Common Tern and  two White-winged Terns were present on 9th.

A good count of 256 Roseate Terns was made at the Ninepins on 9th.

At Long Valley, a Common Snipe on 1st was a new late spring date, the previous latest record being 28 May. Also on 1st, twenty-five Whiskered Terns were at Tai Sang Wai.

Single singing Lesser Cuckoos were reported from Tai Mo Shan on 6th, 14th and 15th, from Wong Leng on 8th, and from Tai Po Kau Headland on 14th.

A recently fledged Black Bulbul was seen in a party of seven birds at Tai Lam Country Park on 7th. This species appears to  be establishing itself as a regular breeder in Hong Kong, albeit still  in very small numbers.

An Oriental Reed Warbler was singing at Tai sang Wai on 13th. A Pheasant-tailed Jacana was at Lok Ma Chau on the same date.

A male Stejneger’s Stonechat was seen at Tai Mo Shan on 14th. There is one  other (unpublished) June record -  a male,  also at Tai Mo Shan,  on 25 June 2011. The status of these June birds is uncertain; ex-captive birds might be involved or there is the possibility that the stonechat may, on rare occasions, breed on the mountain.  The latest officially recognised spring date for this species is 8 May.
June 17-30
The weather continued hot with temperatures regularly up to 33⁰C  and there were periods of heavy rain. Bird-wise, it was rather quiet.

The Sooty Tern on Kung Chau was last reported on 12 June.

A juvenile male Mandarin Duck was reported from Mai Po on 16th. Birds noted on the reserve on 20th included a Tufted Duck, five over-summering Black-faced Spoonbills, 47 Whimbrels, a Great Knot and a singing Oriental Reed Warbler. The Tufted Duck was present on the same pond on 28th (presumably it is unable to fly); on the same day a Chestnut-winged Cuckoo showed well along the casuarinas and a male Greater Painted-snipe was feeding with three chicks on the scrape in front of Hide 1.

A Malayan Night Heron was seen at Tai Tong on 23rd. At least seven Black Bulbuls including juveniles were seen at Kap Lung on the same date.

One or two Himalayan Swiftlets were at Sai Kung East CP on 30th.