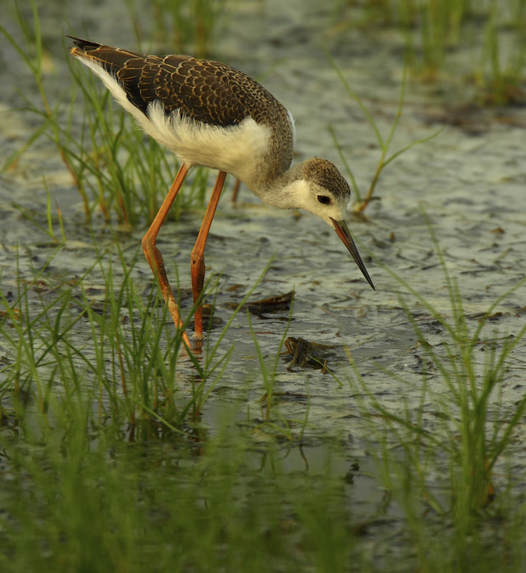 Juvenile Black-winged Stilt at Mai Po in June (archive photograph)
In contrast to the hot dry conditions at the end of May, the first third of June was unsettled. A tropical depression on 5th intensified  into Tropical Cyclone Ewiniar on 6th as it headed towards the Leizhou peninsula in southwest Guangdong, bringing very heavy rain to Hong Kong for three days.

At the HK Wetland Park, the Great Cormorant was seen until 2nd and the Tufted Duck remained until at least 9th. Other birds of note there were a Lesser Frigatebird on 1st and a Cinnamon Bittern on 9th.

The singing Chinese Barbet at Tai Po Kau was heard again on 1st and an Oriental Dollarbird, Lesser Cuckoo and  two Brown-breasted Flycatchers were reported on 4th. The latter, in fact, appear to have abandoned a nest they had built at the end of May but are now constructing a new one in what is hopefully a site less open to casual disturbance.

A tern survey in Mirs Bay on 3rd turned up 222 Bridled, 113 Black-naped and six Roseate Terns.
On 3rd, the scrape at Mai Po held ten Black-faced Spoonbills and seventeen species of wader, including many young Black-winged Stilts and four Oriental Pratincoles, one of which appeared to be nesting. Seventeen Whiskered Terns and  four Gull-billed Terns were also seen.

On 4th, there were 100 terns feeding over the Deep Bay mudflats; counts when the birds were at rest consisted of at least five Gull-billed Terns, 22 Whiskered Terns, 37 White-winged Terns and 14 Little Terns. On the scrape, the ten Black-faced Spoonbills were again seen and a Chinese Spot-billed Duck and two Nordmann’s Greenshanks were present. Five Oriental Pratincoles were also on the scrape, including one in the same place as on 3rd, apparently on a  nest concealed by grassy tussocks, and a bird in a different area gave an intense distraction display to Black-winged Stilts, suggesting the bird had a nest with eggs nearby.

Unfortunately, after the heavy rain brought in by Tropical Cyclone Ewiniar, the nesting sites described above were under water on 9th; however, migrant Oriental Pratincole numbers had increased to 23, consisting of 14 adults and nine well-grown juveniles. Black-winged Stilts, in particular, seemed not to have been affected too much by the rain as at least four birds were sitting on nests of twigs constructed in such a way that they were safely above the water level. A female and four juvenile Greater Painted-snipes were scattered around the scrape. Late passage waders included a Sharp-tailed Sandpiper, a Red-necked Stint, nine Curlew Sandpipers, 18 Greater Sand Plovers and a mongolus Lesser Sand Plover.

The Chinese Spot-billed Duck and 21 Oriental Pratincoles were still on the scrape on 10th, along with two lingering Nordmann’s Greenshanks. Two Chestnut Bulbuls were also seen on the reserve and 28 Pacific Swifts flew over. A Brown Shrike was seen along the Mai Po access road; this sighting was a new latest spring date, the previous record being 7 June.

A male Cinnamon Bittern was seen displaying to a female at Lok Ma Chau; this small heron bred at the same site in 2014 and 2015.
June 11-20
Hot and humid with localised showers; highest temperatures hovered around the 30⁰C mark. There were few bird reports of note.

A Lesser Frigatebird was seen between Tap Mun and Kung Chau on 12th.

Striated Heron at Mai Po boardwalk, 27 June 2018
The final third of the month was hot and humid with temperatures up to 33⁰C on most days. Isolated showers, sometimes heavy, brought some slight relief.

On 22nd a ringed female Hainan Blue Flycatcher was photographed in Tai Po Kau; there was sufficient detail in the image to establish that the flycatcher had been ringed in the same forest on 15 April 2015.

An unseasonal Eurasian Hoopoe was at Discovery Bay on 23rd.

During a very high tide at  Mai Po on 27th, the scrape held the summering Chinese Spot-billed Duck, five Black-faced Spoonbills, 80 Black-winged Stilts including several birds on nests and juveniles of different ages, 21 Pied Avocets, 27 Common Redshanks, 33 Common Greenshanks, 17 Eurasian Curlews, a Black-tailed Godwit, several Little Ringed Plovers (breeding), a Greater Sand Plover, an Oriental Pratincole and ten Gull-billed Terns. The only waders out on the mud flats on the falling tide were three Common Sandpipers. There were, however a  number of egrets and herons including 60 Eastern Cattle Egrets.

Also on 27th, a swiftlet photographed at HK Wetland Park  - see https://ebird.org/view/checklist/S46824685  - was considered by some to be a possible Germain’s Swiftlet, which would be a first for Hong Kong. (Although identification of out-of-range swiftlets is notoriously difficult and the photographs may not preclude the regular Himalayan Swiftlet.)

On 30th another swiftlet sp. was seen at Mai Po. A Lesser Whistling Duck – possibly the same bird as was seen briefly in the same area on 25 May ?? – was also noted.  Out on the mud flats, on the rising tide in the early morning, shorebirds included 83 Greater Sand Plovers, two Terek Sandpipers and two Grey-tailed Tattlers, perhaps indicative of early return passage.
All images & text © David Diskin unless otherwise stated
dadiskin@netvigator.com