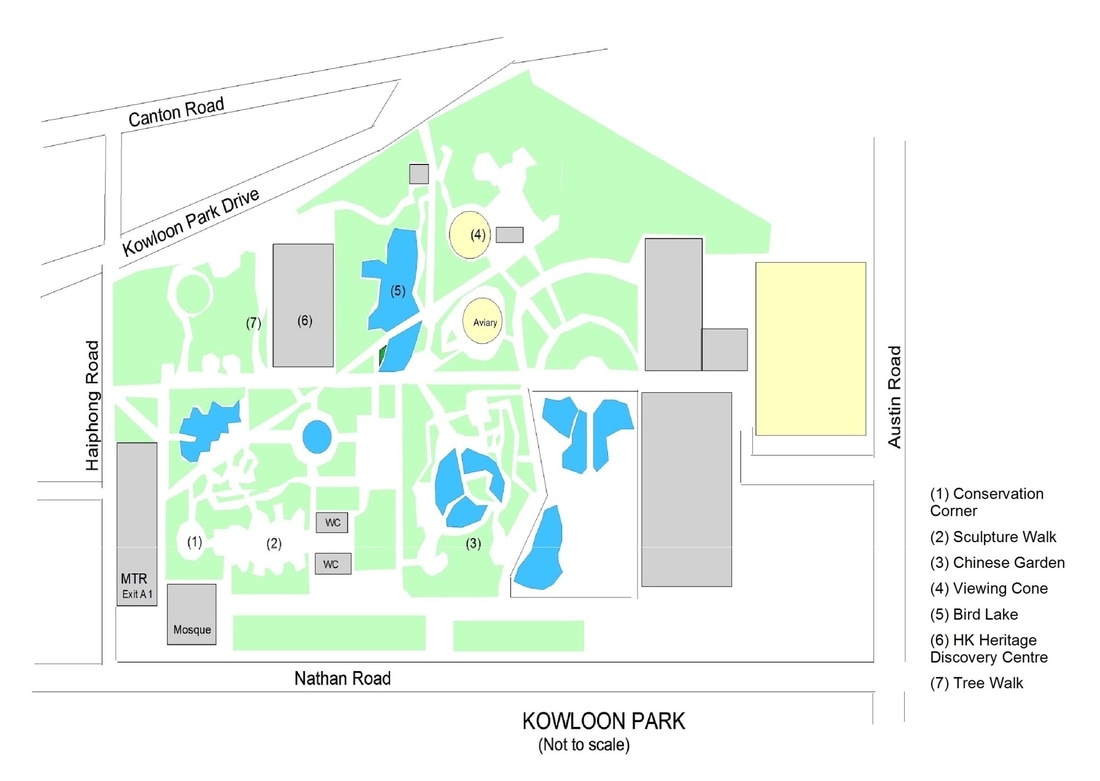 KOWLOON PARK
This green island in the heart of the tourist area of Tsim Sha Tsui is bounded by Canton Road to the west, Nathan Road to the east, Haiphong Road to the south and Austin Road to the north. As you might expect, it is a very busy park, especially on Sundays and, like most parks, has a certain artificiality to it. Nevertheless, it is a convenient area to explore and the keen-eyed naturalist will usually come across something of interest. The park has a number of well-established trees, including several imposing Chinese Banyans. The trees and the undergrowth provide food and shelter for a wide variety of birds. A number of common resident species can often be seen at close range. Birds to look for throughout  the year are:  Black Kite, Alexandrine Parakeet, Spotted Dove, Asian Koel, Greater Coucal, Red-billed Blue Magpie, Masked Laughingthrush, Chinese Bulbul, Red-whiskered Bulbul, Black-collared Starling, Cinereous Tit, White-rumped Munia, Japanese White-eye, Common Tailorbird, Oriental Magpie Robin and Eurasian Tree Sparrow. Over the years the park has also attracted an impressive range of passage migrants and winter visitors.
GETTING AROUND
The park is a simple stroll from Tsim Sha Tsui MTR station. Areas to concentrate on are as follows:

The so-called Conservation Corner (1) is just behind Kowloon Mosque. This corner has some old trees and used to have plenty of ground cover. In the past it was a great place for wintering thrushes and other skulking, ground-haunting birds. I have enduring memories of  Slaty-legged Crake and male Siberian Blue Robin here. Also in April the tall, old trees here (and elsewhere in the vicinity) may hold Blue-and-white, Narcissus and Ferruginous Flycatchers, and also Japanese and Amur Paradise Flycatchers, especially during inclement weather. Unfortunately, it has been less productive in recent years, although is probably under watched.

The Sculpture Walk (2) is an open, tree-lined space. In winter Yellow-browed Warblers and Pallas’s Leaf Warblers are regular here and these may linger into April. White-shouldered Starling often occurs in the trees here in spring.

Between the Sculpture Walk and the Chinese Gardens (3) you may see several large parakeets flying around and squawking loudly. These are Alexandrine Parakeets, which have bred in the park since 1993. Their natural range is India and Indochina, so the small population that persists in the park derives from released birds. Introduced Rose-ringed Parakeets may also occur in the park and can easily be confused with the former species if not seen well. However, Alexandrine Parakeet is larger with a bigger red bill and a maroon shoulder patch.

The Chinese Garden (3) is well-wooded and there are some particularly fine Chinese Banyans growing here. The garden attracts many of the common birds referred to above. Crested Goshawk can occasionally be observed perching in the taller, heavily-leaved trees. The trees around  the Viewing Cone (4) are worth a look for passage migrants. The Bird Lake (5) has a collection of exotic waterfowl.  The most interesting wild birds that you are likely to see here are the Black-crowned Night Herons which are present  in the park throughout the year.  Several birds may be present in the trees around the lake, or perched on logs in the water itself. Little Egret and Chinese Pond Heron have also been known to turn up at the lake, albeit rarely. Other possibilities here are White-breasted Waterhen and White-breasted Kingfisher.

The Tree Walk (7) contains 35 different species of trees – some local, some exotic but widely planted in Hong Kong. The shrubs and lawn here can be particularly good for wintering thrushes (Japanese Thrush, Grey-backed Thrush, Chinese Blackbird etc.) and Rufous-tailed Robin.

GETTING THERE
The park is easily accessible from Exit A1 of Tsim Sha Tsui MTR station. 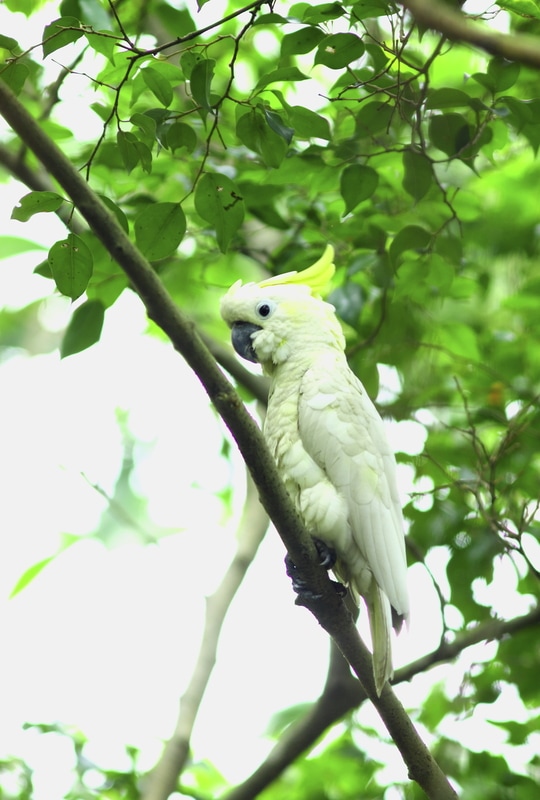 Yellow-crested Cockatoo, Hong Kong Park (archive photograph)
HONG KONG PARK
The eight-hectare Hong Kong Park was constructed on the site of the old Victoria Barracks and opened in 1991. From that earlier military era, the old-colonial Flagstaff House, which was constructed in 1846, has been preserved. Today it houses the Museum of Tea Ware. There are two or three other extant colonial buildings in the park. More modern structures in the park include the Conservatory and the Edward Youde Aviary, various artificial lakes and an artificial waterfall. All of these are set against a backdrop of lush tropical greenery surrounded by the modernistic high-rises of the city. This green island in the urban sea provides a haven for a variety of birds, dragonflies and butterflies. The park provides a good, easy introduction to common Hong Kong species and is easily accessible from Admiralty MTR station.

GETTING AROUND
The entrance to the park is at the top of the escalator that connects Pacific Place with Supreme Court Road. Turn right and follow the path past the Fountain Plaza into the park. Places to visit include the lake, the Tai Chi garden, the viewing tower and the Edward Youde aviary. The Regular common resident species to look for anywhere in the park include Common Tailorbird, Japanese White-eye, Cinereous Tit, Chinese Bulbul, Red-whiskered Bulbul, Crested Myna, Oriental Magpie Robin, Masked Laughingthrush, Black-collared Starling and Spotted Dove. Other resident species to look out for are Yellow-crested Cockatoo, Rose-ringed Parakeet  and Blue Whistling Thrush.

The Yellow-crested Cockatoo is a large whitish parrot. Its screeching call is often the first indication of its presence and it is usually seen flying high overhead against the backdrop of the modernistic skyline - a far cry from the landscape in its native range which is Sulawesi and the islands in the Flores and Java Seas. The species is listed as Critically Endangered by Birdlife International, with only around 2,000 birds extant in the wild.  The population in Hong Kong is said to derive from birds released at Flagstaff House in 1941, but the population has apparently been augmented by escapes and released birds in more recent years. It occurs mainly on the northern side of Hong Kong Island with Hong Kong Park being of particular importance. The highest single count made was of 53 roosting in the park (then Victoria Barracks) in September 1987. The current population in the territory is estimated as being between 60 and 100 birds, a considerable number given its threatened status. I counted 21 from the viewing tower in October 2011.

There is a tall viewing tower in the middle of the park.  The top of the tower, accessed by climbing a 105-step spiralling staircase, gives you a 360˚ birds-eye view over the park. It is a particularly good for spotting the Yellow-crested Cockatoos which nest in holes in the tops of dead trees. Rose-ringed Parakeets might also be seen from here; they sometimes perch on the top of the tower itself.

The attractive Blue Whistling Thrush is widespread in the territory but tends to be shy and often difficult to observe closely. The birds in Hong Kong Park tend to be less shy than elsewhere and there is a good chance of obtaining decent views here. The best place to observe them is in the area around the Tai Chi Garden and the Edward Youde Aviary.

The Edward Youde Aviary is an “open” aviary and contains a number of birds from Asia, including several pairs of breeding Bali Mynas, a bird which is virtually extinct in Bali itself.

OTHER SITES
There are other parks and green areas in Kowloon that attract migrants. The most prominent of these in recent years has been the area around Ho Man Tin East Service Reservoir, particularly the trees near Sheung Lok Street. The list of migrants, including a number of rarities, turned up by a local patch-worker is impressive. Best times to visit are from late August through September/October,  and in April, but winter can also be productive. It is clear that this small area of green in an urban environment acts like an oasis, offering food and shelter to the birds. Almost any green area in the city, if watched regularly, could turn up birds. Other places that sometimes hold interesting birds are King's Park and Lai Chi Kok Park, although the latter seems  not to be as productive as in the past.
Map and text adapted from "Hong Kong Nature Walks: Kowloon, Hong Kong & Outlying Islands".
All text and images on this website are  © David Diskin unless otherwise stated.