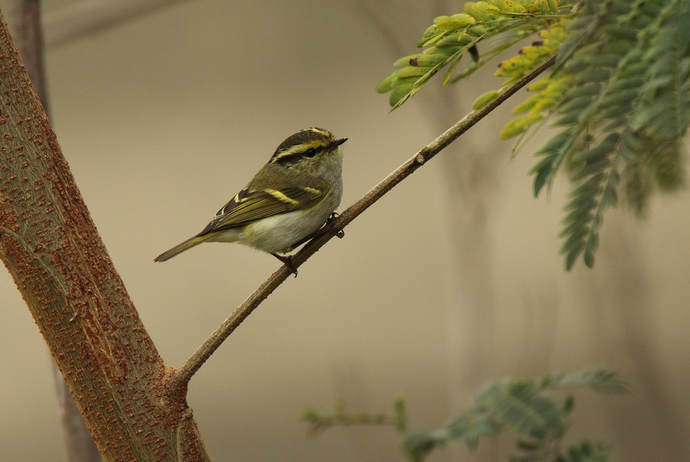 Pallas's Leaf Warbler at Long Valley in December (Birding Hong Kong archive)
It was generally warm and humid with easterly winds until 6th, with temperatures up to 27⁰C. A cold front associated with the northeast monsoon cause temperatures to fall from 7th, down to a low of 13 ⁰C in the New Territories on 9th.

Good numbers of Asian Stubtails, Rufous-tailed Robins and Pallas’s Leaf Warblers were reported from the last week of November into December.

The Smew remained at San Tin at least until 8th. Two Falcated Ducks were there on 1st.

At Po Toi on the 1st, a Chestnut-winged Cuckoo and a Black-naped Oriole were seen (both present from at least 29 Nov); other birds noted on 1st included Ashy Minivet, Radde’s Warbler, Manchurian Bush Warbler, and Rustic, Tristram’s and Black-faced Buntings. The cuckoo and oriole were still present on the island on 6th, along with Red-breasted Flycatcher,  Brown-headed Thrush, and  Eastern Crowned Warbler, but the best sighting was a Thick-billed Green Pigeon. There are only five previous records of this pigeon in Hong Kong, the last being in 2006. (Note that the ferry on Tuesday and Thursday now returns from Po Toi at 3.30 p.m. instead of 2.00 p.m. – the pigeon was found not long before the ferry departed!)

Two Falcated Ducks and an American x Eurasian Wigeon hybrid were at the Wetland Park on 2nd. The hybrid wigeon remained at least until 4th. A Hume’s Leaf Warbler was seen and heard calling on 9th.

A Greylag Goose was seen at Mai Po on 3rd and 4th; this is the 8th record for Hong Kong. A Rook (presumable the same one reported from Long Valley on 19 November) was at the southern end of the reserve on 6th, and a Baikal Bush Warbler was trapped by ringers on the same day.

A Short-eared Owl was seen at the Soko Islands on 4th.

A late Amur Paradise Flycatcher was at Tai Lam CP on 4th.

At Ho Pui on 8th, Fujian Niltava, Chestnut-crowned Warbler, Eastern Crowned Warbler and Speckled Piculet were recorded.
December 10-16
The northeast monsoon persisted bringing grey skies and cool weather to the south China coast. Temperatures in the northern New Territories fell to 10⁰C on 13th. It became warmer at the end of the week with temperatures reaching 23 ⁰ on 15th.

On 10th, five Yellow-breasted Buntings remained at Long Valley (two were still there on 11th) and a Citrine Wagtail was also reported.

The Thick-billed Pigeon was still present at Po Toi on 11th, but was only found at 3.15 p.m. – in the tree where it was originally seen under similar circumstances on 6th - fifteen minutes before the ferry departed.

Three Falcated Ducks  and the American x Eurasian Wigeon hybrid were at the Wetland Park on 16th. 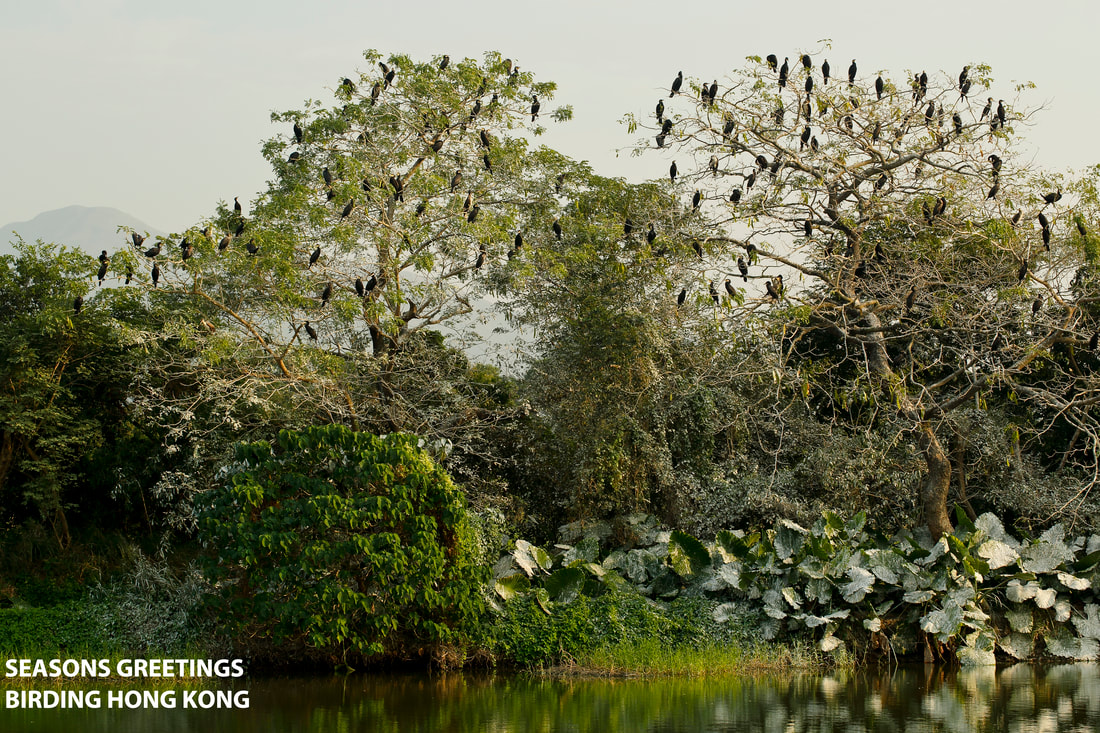 Great Cormorants at roost, Mai Po
December 17 – 23
East winds. Unseasonal warmth, with temperatures on 21st reaching 29⁰C in the northwest New Territories. However, on 23rd a surge of the northeast monsoon brought wet and windy conditions with temperatures falling to 17⁰C in the evening.

Tai Po Kau continued to produce good birds. There were reports of Siberian Thrush and Japanese Robin on 17th. A Fujian Niltava was seen on 18th. A White-spectacled Warbler (there are seemingly two different birds present in the bird waves), the Chestnut-crowned Warbler  and the  Sulphur-breasted Warbler were all reported on 19th, and the latter was seen again on 23rd.

The Yellow-streaked Warbler remained at Mt Davis throughout, and a Dusky Thrush was seen on 19th.

The Thick-billed Green Pigeon was still on Po Toi on 18th & 20th. Also seen there on the 18th were the Black-naped Oriole and two Brown-headed Thrushes.

A Common Starling was at Long Valley on 20th. The wintering Eastern Water Rail was still present there on 23rd.

On 21st the eastern-race Rook and a Common Starling were at Lut Chau.

An adult-winter Pallas’s Gull and a Nordmann’s Greenshank were seen from the Mai Po boardwalk on 22nd. The Pallas’s Gull was present on the following day, as were two Mallards and two Falcated Ducks.

Also on 22nd, the Smew was still at San Tin.
December 24-31
The Christmas period proved to be the warmest in thirty years, with the temperature on Boxing Day climbing to a balmy 25 ⁰C.  However, the easterly winds were displaced by a replenishment of the northeast monsoon from 28th, and the mercury in the New Territories plunged to 8⁰C in the early morning of 30th (0.9⁰C on Tai Mo Shan!), the coldest day of the winter so far.

Mai Po boardwalk was productive. The two  Mallards were seen again on 24th and 29th, and the male Falcated Duck was also present on 29th. An obvious  hybrid American x Eurasian Wigeon was present on 29th. Waders included the Nordmann’s Greenshank (at least to 28th), a Long-billed Dowitcher (24th & 29th), and a Far Eastern Curlew among the wintering Eurasian Curlews (28th & 29th). Two adult-winter Pallas’s Gulls were noted on 24th & 26th.

The main reserve was quieter, although the Rook was present at the southern end on 24th, and an interesting hybrid Mallard x Northern Pintail was on the scrape on 25th & 29th ( see http://www.hkbws.org.hk/BBS/viewthread.php?tid=27842 ).

The other main birding site during the period was the forest at Tai Po Kau. A number of scarcer warblers were present, although it took a certain amount of luck and persistence to come across the bird waves they were in. Birds present were a Sulphur-breasted Warbler, two White Spectacled Warblers (a grey-morph and a green-morph), and a Chestnut-crowned Warbler – all of which had been noted earlier in the winter. New on 30th was a Rufous-faced Warbler (c. 10th Hong Kong record if accepted). The supporting cast of Phylloscs included Eastern Crowned Warbler, Goodson’s Leaf Warbler and a fair number of Pallas’s Leaf Warblers.

On 27th, Po Toi produced the long-staying Black-naped Oriole, as well as a Red-breasted Flycatcher, a Radde’s Warbler and a Goodson’s Leaf Warbler.

A female White-tailed Robin present at Lung Fu Shan on 28th (although apparently there for a number of days before) was still there on 31st (see https://ebird.org/view/checklist/S51012537 ).

A Grey Bush Chat was at Shek Kong Airfield on 28th. Nine Grey-headed Lapwings were at the usual wintering site on the Kam Tin River on 29th. On the same date, an unseasonal male Yellow-breasted Bunting was at Lam Tsuen; also noted there were eight Little Buntings.