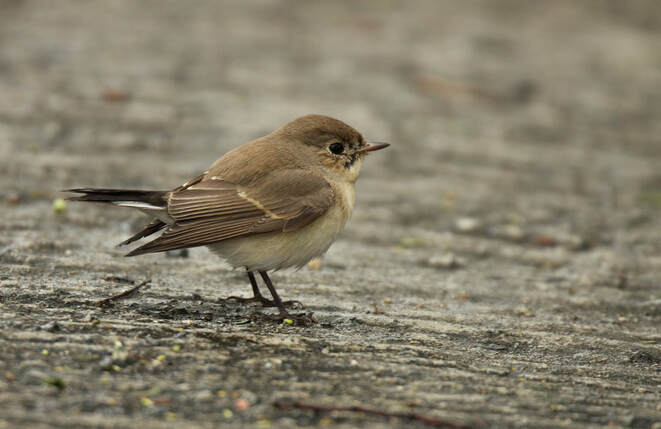 Red-breasted Flycatcher at Shek Kong Airfield Road (Birding Hong Kong archive)
The new year began cold but the northeast monsoon ameliorated from the 3rd and temperatures reached the low twenties at the end of the week. It became grey, cloudy and humid.

At Tai Po Kau, there were regular reports of Sulphur-breasted Warbler, two White-spectacled Warblers, Chestnut-crowned Warbler, Goodson’s Leaf Warbler and Eastern Crowned Warbler during the week,  but there were no further sightings of the Rufous-faced Warbler.

The female White-tailed Robin remained at Lung Fu Shan until the end of the week.

On 1st, a male Fujian Niltava was at Shing Mun, the Yellow-streaked Warbler was again reported from Mt Davis, and 24 Little Buntings were at Lam Tsuen.

A Red-breasted Flycatcher was seen at Aberdeen on 2nd, and a pair of Slaty-backed Forktails were at Shing Mun -  see http://www.hkbws.org.hk/BBS/viewthread.php?tid=27867 .

A party of 15 Grey-capped Greenfinches were on the Plover Cove dam at Tai Mei Tuk on 3rd.

On 4th, a Radde’s Warbler and a Brown Shrike were among the birds observed at Ho Man Tin.

A Radde’s Warbler and a male Grey Bush Chat were near Wu Kau Tang on 5th. On the same date, an Ashy Minivet was seen at Mt Davis; this is the 4th winter record of this species in Hong Kong, the first being in January 2016.

On 6th, a Japanese Sparrowhawk was at Sha Tau Kok and a Long-billed Dowitcher was at HK Wetland Park. The Yellow-streaked Warbler was again   at Mt Davis, and a briefly-seen White-tailed Robin was also reported from the same site.
January 7 – 13
Mild, misty and polluted during the week , with temperatures up to 23⁰C.

White-spectacled Warbler, Sulphur-breasted Warbler, Chestnut-crowned Warbler, Goodson’s Leaf Warbler and Verditer Flycatcher were all seen at Tai Po Kau -  at least up to 11th although they appear to have been elusive over the weekend of 12th & 13th. New in the forest reserve for this winter was a female White-throated Rock Thrush on 10th.

On 8th, the Rook was at Mai Po. A Fujian Niltava was at Leadmine Pass. An Eastern Water Rail and a Japanese Quail were at Long Valley; the latter used to be fairly common in winter – there were  up to 15 at Long Valley in the 1994/95 winter -  but  it is now rare during this season.

The Long-billed Dowitcher was seen again at  HK Wetland Park on 9th. A Common Starling and 92 Red-rumped Swallows were at Ma Tso Lung on the same day.

The two Slaty-backed Forktails were still at Shing Mun on 10th.

A female Common Reed Bunting was trapped at Mai Po on 11th.

On 12th, the Yellow-streaked Warbler was again reported from Mt Davis. The long-staying Smew and the two Common Pochards were at San Tin, and there was a good count of 488 Tufted Ducks. Two male Falcated Ducks were at Mai Po. The White-tailed Robin was still a Lung Fu Shan, and a Bull-headed Shrike was also present there.

The Smew was still at San Tin on 13th.
LATE NEWS
I have just received a series of photographs taken by visiting Australian birder Edwin Vella at Mai Po on 31 December 2018. These are reproduced below with Edwin’s kind permission. The images, I believe, show all the features of a juvenile Hen Harrier. If accepted, this will be the first record for Hong Kong. (A much trickier sub-adult harrier at Mai Po in November 2017 was considered likely to be this species but was later identified as a Pied Harrier.) Click on the images to enlarge them. 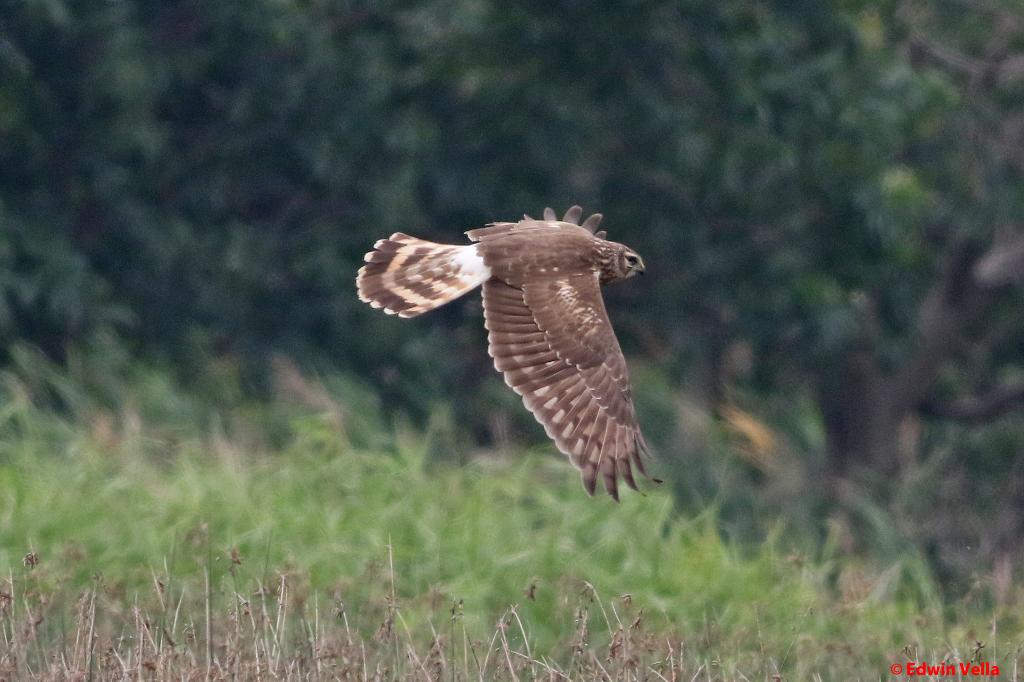 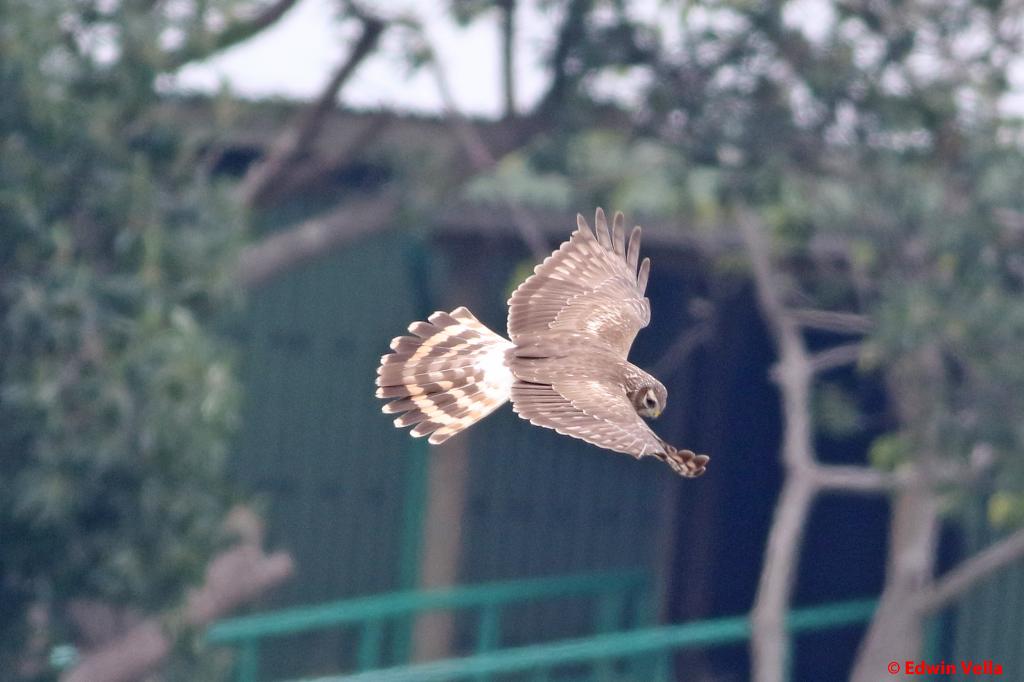 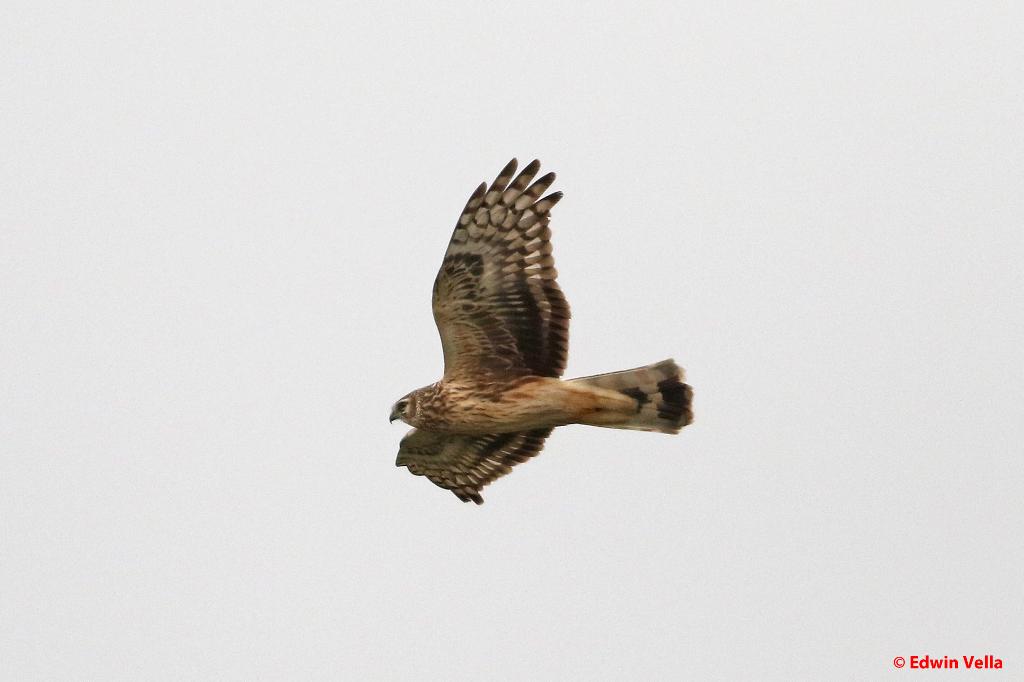 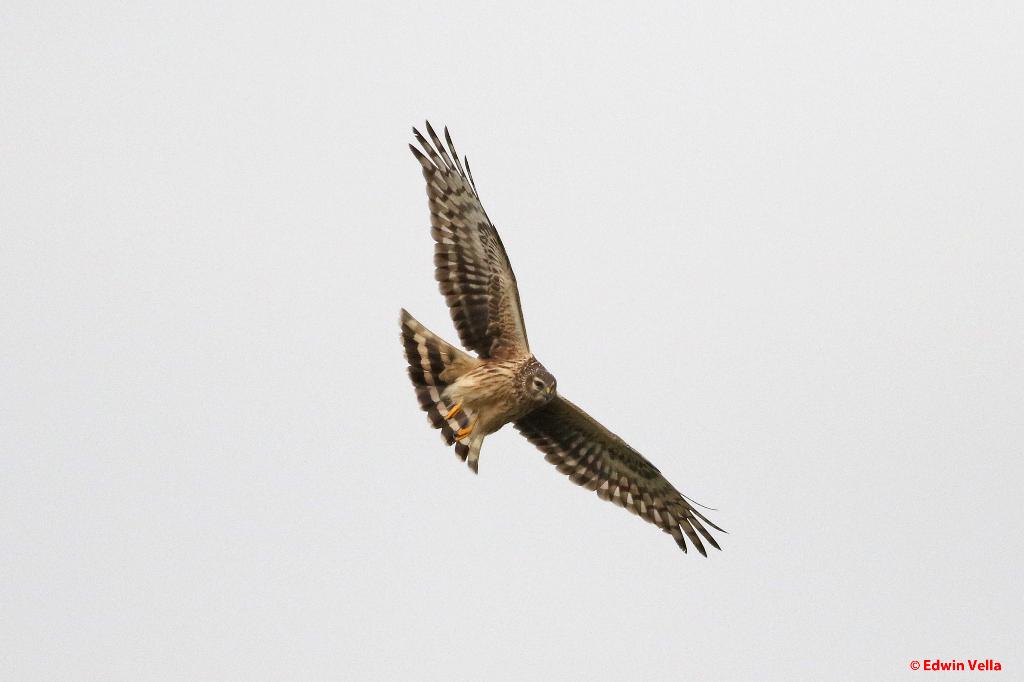 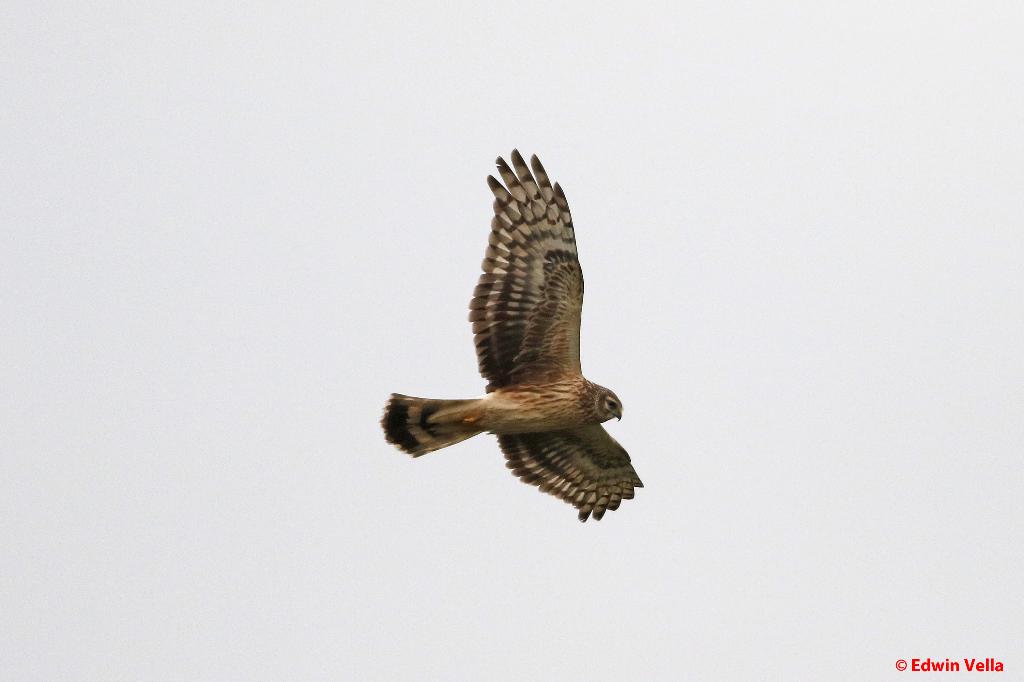 Juvenile Hen Harrier at Mai Po, 31 December 2018.   All photographs copyright Edwin Vella.
January 14-20
Another mild week with a slight surge of the northeast monsoon mid-week, causing temperatures in the northern New Territories to fall to 12⁰C on 17th. Temperatures were back up to 23⁰C on 20th.

On 14th, an Alström's Warbler was seen at Tai Lam CP. This is  presumably a re-sighting of the bird that  was reported at the same location on 25 November 2018, This will be the first winter record of this rare autumn migrant if accepted. (There are currently nine accepted autumn records from 2004 – 2016, extreme dates being 30 September to 12 November.)

Birds reported on 15th included a male Fujian Niltava in Tai Po Kau, a Slaty-legged Crake in Kowloon Park (present until at least 19th) and the Long-billed Dowitcher at HK Wetland Park.

The wintering eastern-race Rook was again seen at Mai Po on 18th. Matt Kwan has pointed out that the Rook he saw at Long Valley on 19 November 2018 was an adult. The Rook seen since then at Mai Po/Lut Chau is a juvenile. These birds are therefore the second and third records for Hong Kong following the first in the 2017/18 winter.

On 19th, Mike Kilburn came across two rarities at San Tin: a Barred Cuckoo Dove and an unstreaked acrocephalus warbler that was identified on call as a Blunt-winged Warbler.

The cuckoo dove is the 12th or 13th record for Hong Kong and is possibly the same bird as was seen at nearby Lok Ma Chau on 16 November 2018. The race of Barred Cuckoo Dove involved is Macropygia unchall minor which is said to be resident in the mountains of south China (Fujian, Guangdong, Hainan) south  to central  Vietnam, Laos and Thailand. Based on the Hong Kong  records, however,  some altitudinal  movement evidently  occurs in winter.

The nominate race of Blunt-winged Warbler Acrocephalus c. concinens breeds  in the northern and central parts of east China (Beijing and north  Hebei south  to Guangxi and probably Guangdong); it winters  mainly in  Myanmar, Thailand and Laos. There are fifteen previous records for Hong Kong, although as with other  rare skulking acros on the Hong Kong list, the vast majority have been picked out of mist-nets at Mai Po. Extreme dates for this species  are 6 September to 21 April; there have been  five previous records between December and February. It is interesting to speculate that, with the milder winters we are having in Hong Kong, this rare species might become more regular in this season; certainly Black-browed Reed Warbler whose non-breeding  range encompasses the same area in Southeast Asia as Blunt-winged Warbler, is more frequent in Hong Kong in winter than it used to be.

Other birds noted at San Tin on the same date were two Falcated Ducks, 720 Tufted Ducks, two Common Pochards, a Pied Harrier and a Yellow-breasted Bunting. 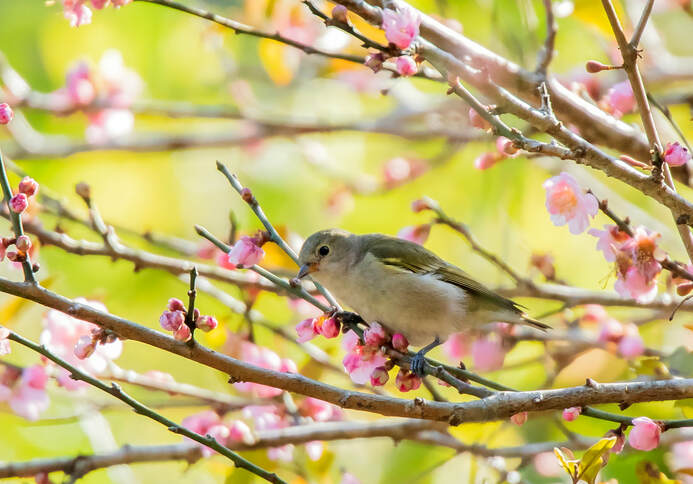 Fire-capped Tit, Kadoorie Farm, 29 January 2019
Generally fine and dry conditions with cool mornings (down to 11⁰C in the New Territories on 22nd) and warm days (up in the low twenties most days). Winds from the northeast or east.

Also, a photograph of a juvenile harrier posted on the HKBWS website on 28th, but taken at Mai Po on 26th,  is a Hen Harrier; presumably this is the same bird as the one at Mai Po on 31 December  (see above).

Highlight of the month, however, was an unusual flowerpecker-like bird photographed at Kadoorie Farm on 25th. The photo was posted on the HKBWS website and was identified by Paul Leader as a female Fire-capped Tit Cephalopyrus flammiceps, a potential first for Hong Kong and one that, as far as I’m aware, wasn’t on the radar of any  of the local birders here. This species has two races: nominate  C. f. flammiceps occurs on the  Indian subcontinent. C.f. olivaceus, the subspecies we’re concerned with here, has disjunct populations in  Nepal, Bhutan and northeast India, and in China (Ningxia,  Gansu, Shaanxi, Sichuan, Tibet, Yunnan and Guizhou). The species  appears to be  an altitudinal migrant with some birds having a more extensive migration to east Myanmar, northern Thailand and northern Laos. News of the bird’s exact location didn’t get out until late on 27th, but fortunately the bird was still present on 28th and 29th, allowing most interested birders to catch up with it.

An immature male Mrs Gould’s Sunbird (potentially 13th Hong Kong record) and a Chestnut-flanked White-eye were also reported from Kadoorie Farm on 29th by birders there to see the Fire-capped Tit.

A number of other rare and scarce species remained from earlier weeks. The Yellow-streaked Warbler was at Mt Davis until at least 24th. The Rook was again at Lut Chau on 27th. White-spectacled Warbler, Chestnut-crowned Warbler, Eastern Crowned Warbler, and Sulphur-breasted Warbler were all at Tai Po Kau on 27th. The Rufous-faced Warbler, seemingly the trickiest of the scarce wintering  warblers at Tai Po Kau to connect with, was  seen again on 29th.

Mai Po held two Pallas’s Gulls at the boardwalk on 24th, and a  Baikal Bush Warbler was singing in an inaccessible reed bed on the same day. A Black-winged Kite and a Long-billed Dowitcher were on the reserve on 26th. The two Pallas’s Gulls were still present on 27th.

Another Baikal Bush Warbler was reported from near Tu Kwa Ling in the northern New Territories on 26th.

The Slaty-legged Crake was still in Kowloon Park on 30th. The Fire-capped Tit was present at KFBG on 30th & 31st. Apparently, two Mrs Gould's Sunbirds are also present in the gardens. 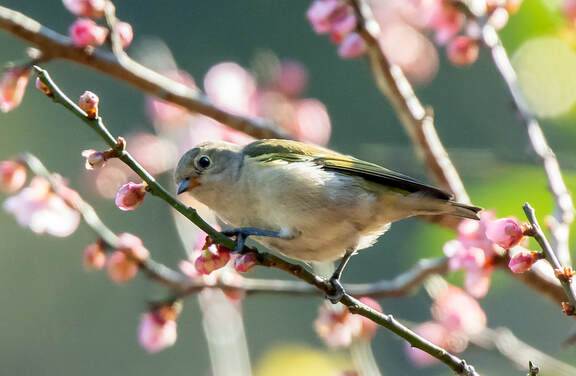