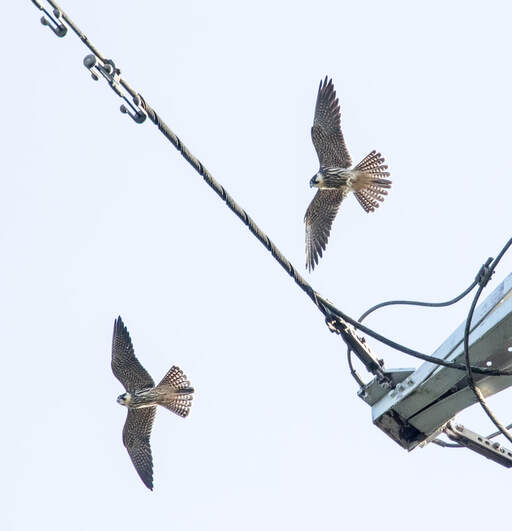 Eurasian Hobbies at Wo Hop Shek, 8 August 2020
The trough of low pressure over the South China Sea at the end of July developed into Tropical Cyclone Sinlaku and Strong Wind Signal number 3 was raised on 31 July. Sinlaku brought heavy rain and squally thunderstorms to the region during the first few days of August. The weather improved after 6th once anticyclonic conditions became established and temperatures rose back up to 34⁰C on 8th & 9th.

The stormy conditions brought a mega-rarity to Hong Kong on 2nd in the form of a Brown Noddy seen feeding with Bridled Terns off Po Toi rock from the Po Toi – Stanley ferry by Carrie Ma. The bird was still present in the pouring rain on 3rd, albeit seen by just one intrepid observer. This is only the second occurrence of this species in Hong Kong, the first being a bird feeding off Po Toi during the passage of Typhoon Chanchu on 17 May 2006.

A visit to Po Toi rock on 4th turned up 50 Bridled Terns, eight Roseate Terns, and 30 Black-naped Terns but unfortunately not the sought-after Brown Noddy.

The Ryukyu Scops Owl at Tai Lung, Sheung Shui was present until at least 3rd.

A Black-winged Kite was at Tsim Bei Tsui on 1st and another (the same bird?) was at Pak Nai on 6th.

On 3rd, four Vinous-throated Parrotbills and a Chinese Grassbird were noted on Tai Mo Shan, and a Cinnamon Bittern was at Lok Ma Chau.

On 5th, a Eurasian Hobby was seen at Lam Tsuen. At Long Valley, there were 120 White-headed Munias (Cat. III) and 18 Chestnut Munias (Cat. IIC). The increase in numbers of these two cagebird species since July raises the question of who is continuing to release  them and why.

On 6th, Dylan Thomas who was birding Lam Tsuen in the afternoon, noted four Eurasian Hobbies hawking prey over the distant slopes of Wo Hop Shek. These four birds – a family party of two adults and two juveniles - were still present at Wo Hop Shek on 8th, perching on the hillside pylons. It seems likely that the species bred at this site this summer.

On 8th, a Greater Crested Tern was at Tap Mun.

Over a hundred terns were off Peng Chau on 8th & 9th – a mixed flock of Black-naped and Roseate Terns.

Also on 9th, an Asian Dowitcher was at the unusual location of Long Valley. Sixty Eurasian Curlews, a Ruddy Turnstone, and 15 Red-necked Stints were at Mai Po.
August 10 - 16 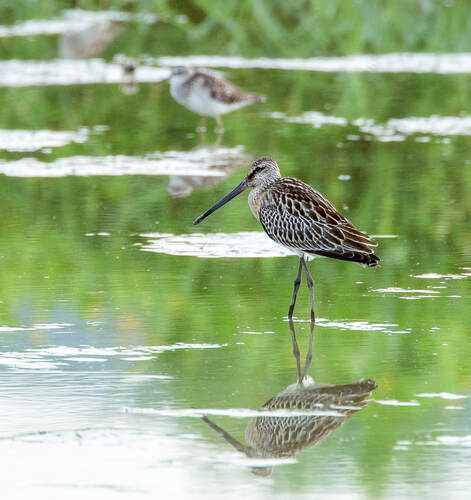 The Asian Dowitcher remained at Long Valley from 10th to at least 14th, and the first Pintail/Swinhoe’s Snipe of the season was seen there on 10th. The released munias continued to be reported throughout the week with high counts of 140 White-headed Munias and 20 Chestnut Munias on 10th. Two Eurasian Hobbies were over nearby Crest Hill on 10th.

Also on 10th, the four Eurasian Hobbies were again noted at Wo Hop Shek. A Black-winged Kite was at Mai Po. A Bonelli’s Eagle and a flock of 43 Black Bulbuls were at Tai Lam CP.  In addition, a Slaty-breasted Rail was heard at Yuen Long Bypass Floodway; this bird was first seen on 6 August.

On 11th, two juvenile Bonelli’s Eagles were over the landfill near Ping Yeung. Two Eurasian Hobbies were seen near Mai Po.

A number of terns were reported during the week, mainly from the Peng Chau – Hei Ling Chau – Kau Yi Chau area between Lantau and Hong Kong Island. These largely seemed to consist of summering terns dispersing from their local breeding sites; peak counts were 106 Black-naped Terns near Peng Chau on 11th, and 30 Bridled and 40 Roseate Terns at Peng Chau on 15th. Migrant terns involved two Greater Crested Terns and two Common Terns in the Peng Chau – Hei Ling Chau area on 13th and a Common Tern between Peng Chau and Kau Yi Chau on 14th.

Another Common Tern was seen from the Tap Mun – Ma Liu Shui ferry on 12th, as were six Greater Crested Terns. Fifteen Black-naped Terns were seen from the ferry on 16th.

A juvenile Black-tailed Gull was in Tolo Harbour below Tai Po Kau on 13th.

On 15th, single Black-winged Kites were seen at Pak Nai and Mai Po.

A juvenile Sooty Tern - presumably the same bird as was seen on 7 August – was at Ngau Shek Chau on 10th and again on 16th. Also there on 16th were 100+ Bridled Terns, five Black-naped Terns and a Lesser Frigatebird.
August 17 – 23

Typhoon Higos passed southwest of Hong Kong on 18th/19th. Storm signal 9 was raised at 1.30 a.m. on 19th. The typhoon brought heavy rain and strong winds to the territory, but – as typhoons go – it was relatively mild and caused no damage. The rest of the week was dominated by anticyclonic conditions, with fine weather and temperatures again up to 34⁰C.

At Long Valley, the Asian Dowitcher remained until at least 20th. The Pintail Snipe present on 10th was also still there on 20th. A hundred White-headed Munias and three Chestnut Munias were noted on 17th.

On 18th, an Amur Paradise Flycatcher was at Ho Man Tin.

On 19th, after the passage of Typhoon Higos, 20 Common Terns and three Greater Crested Terns were off Ma On Shan in Tolo Harbour.

On 20th, a frigatebird sp. was seen flying over Ho Man Tin towards Kwun Tong, and a Long-tailed Jaeger and two Greater Crested Terns were seen from the Po Toi ferry. The Long-tailed Jaeger sighting was a new early autumn date, albeit by just one day. Po Toi island itself was quiet apart from a Chestnut-winged Cuckoo.

Also on 20th two Brown-breasted Flycatchers were in Tai Po Kau, an Amur Paradise Flycatcher and 30 Black Bulbuls were at Tai Lam CP, and 30 White-cheeked Starlings were at San Tin.

On 21st, 40 Black-naped Terns and 15 Roseate Terns were seen from the Cheung Chau – Central ferry. An Eastern Crowned Warbler and a Hainan Blue Flycatcher were in Tai Po Kau.

On 22nd, a Barred Cuckoo Dove was heard singing at Pak Sha O. This is the first summer record of this species in Hong Kong, extreme dates being 16 November – 15 May. Although a rare winter visitor, it has been noted in the territory annually since 2014, and one was heard singing at Tai Mo Shan on 28 March, 2019. An Eastern Crowned Warbler was also at Pak Sha O on the same day.

At sea on 22nd, apart from "hundreds" of Bridled Terns, 25 Red-necked Phalaropes, a Greater Crested Tern, and two Black-naped Terns were recorded near Tap Mun, and 70 Bridled Terns were still at Castle (Po Toi) Rock. 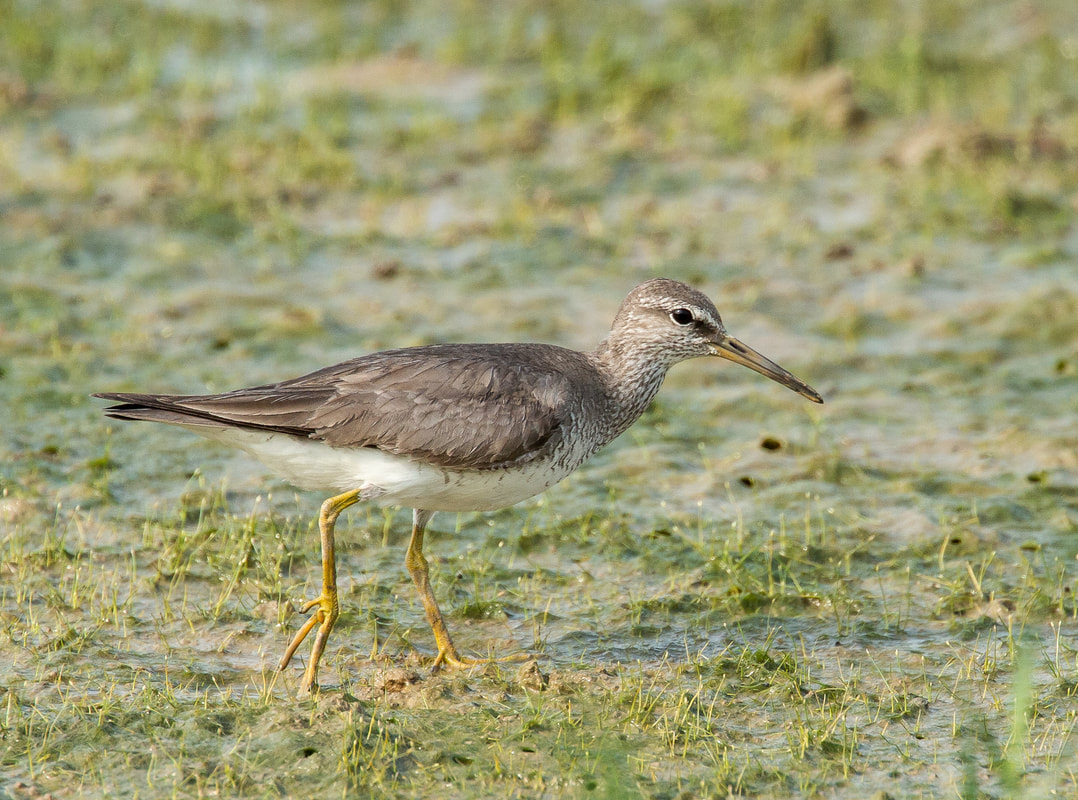 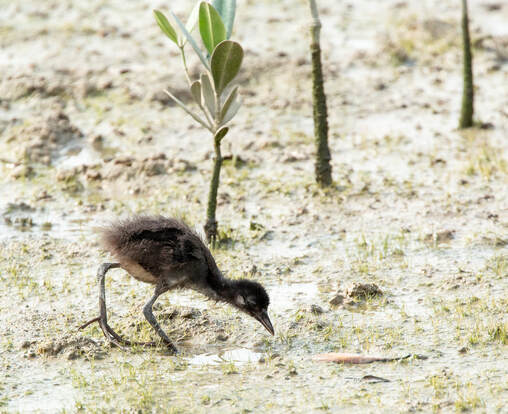 Chick White-breasted Waterhen at Mai Po, 28 August 2020
********************
Please note that these are unchecked reports. Records of rarities and of unseasonal occurrences may be subject to assessment by the HKBWS Records Committee. A checklist showing species  for which a description is required can be found at the HKBWS website - http://www.hkbws.org.hk/BBS/viewthread.php?tid=28893&extra=page%3D1
All images & text © David Diskin unless otherwise stated
dadiskin@netvigator.com