Brown Noddy near Wong Mau Chau, 12 July 2021.
Mainly fine and hot with isolated showers during the period under review. T1 was raised on 6th & 7th when two tropical storms occurred. One passed east of Luzon and then veered northeast towards Taiwan. The other formed in the central part of the South China Sea and moved towards Hainan. The latter brought squally showers to Hong Kong on 7th but remained too distant to have any great effect. Temperatures were up to 35⁰C on 11th.

The best bird was a Brown Noddy in waters off Tap Mun. This was presumably the same bird seen flying past Conic Island on 20 June. Its prolonged stay in fine weather allowed many birders to catch up with it and add it to their Hong Kong list - a welcome break from the general monotony of the summer months.

Single Pacific Swifts were noted at Po Toi on 2nd & 6th, and two were there on 8th. Single Lesser Cuckoos were heard at at Kap Lung, Tai Lam CP on 4th,  Tai Mo Shan on 10th and Tai Po Kau on 14th.

A Slaty-breasted Rail was at Mai Po on 5th.

Three Red-necked Phalaropes were seen from Po Toi on 7th and two were there on 8th.

A Brown Noddy was seen in the general vicinity of Wong Mau Chau near Tap Mun from 11th to at least 15th.

Greater Crested Terns were in evidence as follows: two from the Mui Wo – Peng Chau ferry on 1st, one from Po Toi on 1st, one from the Cheung Chau – Central ferry on 2nd, nine past Po Toi on 2nd, two past Po Toi on 3rd, three past Po Toi on 7th & 8th, and three at Shek Ngau Chau on 12th. Breeding Bridled, Roseate and Black-naped Terns were noted at Kung Chau and Shek Ngau Chau. and were also seen in small numbers from the various Outlying Island ferries. Migrating Roseate Terns were noted heading northeast past Po Toi as follows: five on 2nd, four on 3rd, 22 on 6th, and six on 7th. Common Tern sightings from Po Toi involved one on 2nd and two on 3rd, 7th and 8th.  Perhaps a little more surprisingly, Parasitic Jaegers continued to be seen moving past Po Toi with one there on 2nd, and four on 7th & 8th. A Short-tailed Shearwater was also seen off Po Toi on 8th and a Brown Booby was there on 7th. 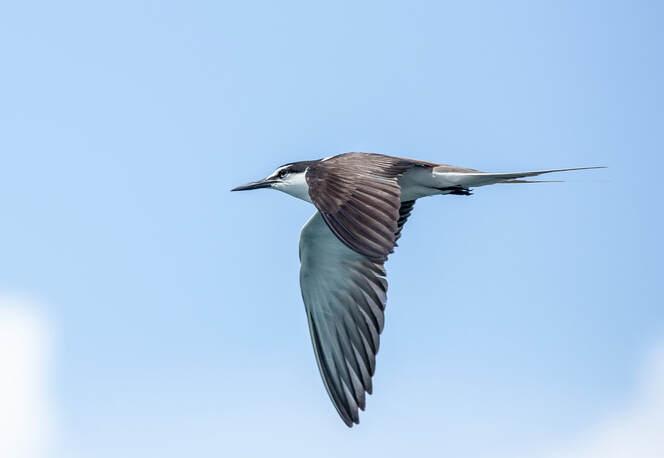 Bridled Tern at Shek Ngau Chau, 12 July 2021
Four Black-faced Spoonbills were at Mai Po on 11th. Cinnamon Bitterns were reported from HK Wetland Park on 3rd, Mai Po on 4th, Lok Ma Chau EEA on 8th, Sandy Ridge on 10th and Ho Sheung Heung on 11th; all were singles apart from a pair Lok Ma Chau. A Black Bittern was also at Lok Ma Chau on 8th. A Chinese Egret was at Pak Nai on 11th.

Single Black-winged Kites were noted at Nam Sang Wai on 1st & 3rd, Ting Kok and Shuen Wan on 2nd, Mai Po on 4th, Mui Wo on 6th and Pak Nai on 11th. Other raptors of note were a Crested Honey Buzzard at Tai Lam CP on 4th – the first summer record for Hong Kong, and three Bonelli’s Eagles at Sandy Ridge on 10th.

A Eurasian Hobby was along the Mai Po access road on 1st. 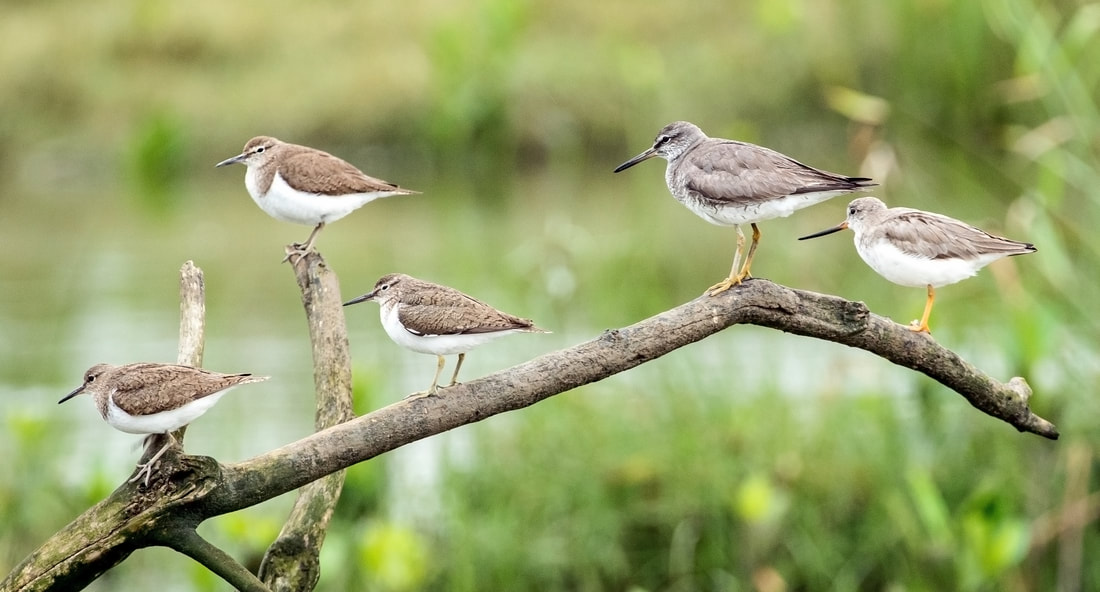 Common Sandpipers, Grey-tailed tattler and Terek Sandpiper at Mai Po at the end of July
(Birding Hong Kong archive)
A series of low-pressure systems brought unsettled weather to the territory. T3 was raised on 19th & 20th as Tropical Storm Cempaka came within 200 kilometres southwest of Hong Kong, bringing heavy rain. Meanwhile, the far more powerful Typhoon In-fa moved northwards to the east of Taiwan and hit the Chinese coast in Zhejiang province. Descending air from In-fa as it moved overland in China brought very hot and polluted conditions to Hong Kong between 23rd and 27th.

Best bird was the second Brown Noddy of the summer at a readily accessible location (the Cheung Chau – Central fery) for anyone who had not seen the bird off Tap Mun. Also of great interest were Bart de Schutter’s continuing seabird records from Po Toi; these included the first ever July records of Streaked Shearwater in Hong Kong. Details follow:

Two Himalayan Swiftlets were off Po Toi on 18th. A Lesser Cuckoo was singing at Bride’s Pool Road on 19th.

Single Slaty-legged Crakes were heard at Pak Sha O and Shing Mun on 23rd, and in the hills above Shui Hau on 24th. There was an unusual record of a Barred Buttonquail calling at Kai Lung Keng on 28th.

The Brown Noddy near Tap Mun from 11th was last reported on 17th. A different Brown Noddy - a very abraded individual with freshly moulted inner primaries - was in waters between Cheung Chau and Central from 16th – 31st. Apart from the three local breeding species of terns, a Gull-billed Tern was seen from the Cheung Chau – Central ferry on 18th, and seven were at Mai Po on 25th. Single Greater Crested Terns were seen from the Po Toi ferry on 18th and the Cheung Chau – Central ferry on 19th & 20th, and six were off Po Toi on 22nd. Also off Po Toi on 22nd were two Common Terns.

Other seabirds continued to be noted off Po Toi. A Parasitic Jaeger was seen on 22nd. Three Short-tailed Shearwaters were seen on 21st.  Nine Streaked Shearwaters were noted on 20th, with seven there on 21st and a record count of 149 on 22nd. These are the first July records of this species in Hong Kong. A Brown Booby was also seen from Po Toi on 22nd.

A Black-faced Spoonbill was at Mai Po on 27th. Single Cinnamon Bitterns were reported from Lok Ma Chau EEA on 25th and Fung Lok Wai on 29th.

Single Black-winged Kites were at Mai Po on 25th and at Luk Keng on 26th. Three Bonelli’s Eagles were at Hung Leng near Fanling on 16th.

Two Indochinese Green Magpies (Cat III): were at Hok Tau on 25th. and 128 Collared Crows were counted going to roost at Shuen Wan landfill on 27th; this is the highest count at this roost site since surveys began in 2017.

The highest count of Vinous-throated Parrotbills at Tai Mo Shan was 21 on 26th. An adult Orange-headed Thrush was seen with three recently fledged young at Tai Po Kau on 18th. A juvenile Brown-breasted Flycatcher was at KFBG on 16th and an adult was at Tai Po Kau on 31st.   A female Yellow-rumped Flycatcher was reported from Tai Tong on 29th. This will be a new early date if accepted as the previous earliest report is 2nd August.

Three or four Plain Flowerpeckers were in a family party at Shek Kong catchwater on 16th. Four Chinese Grosbeaks were at San Tin on 16th and one was in Yuen Long Park on 18th.
********************************
Please note that these are unchecked reports. Records of rarities and of unseasonal occurrences may be subject to assessment by the HKBWS Records Committee. A checklist showing species  for which a description is required can be found at the HKBWS website - http://www.hkbws.org.hk/BBS/viewthread.php?tid=28893&extra=page%3D1
All images & text © David Diskin unless otherwise stated
dadiskin@netvigator.com