Black-winged Stilt chick at Mai Po, 9 July 2020
Generally fine and hot weather over southern China during the period under review, with temperatures regularly up to 33⁰C; the heat was occasionally tempered by fresh south-westerly winds and the odd local shower.

Summering water birds continued to be recorded from Mai Po, including a Chinese Spot-billed Duck on 1st & 7th, 76 Eurasian Whimbrels on 3rd (with 75 there on 10th), 21 Eurasian Curlews on 10th, two Bar-tailed Godwits throughout, three Gull-billed Terns on 10th, and 13 Black-faced Spoonbills on 3rd. There was evidence of return passage with the first Common Sandpipers (two on 3rd) and Wood Sandpipers (three on 6th) being seen. Eight Oriental Pratincoles were also noted on 6th. Out on the mud flats on 9th, 335 Greater Sand Plovers were counted, and two Kentish Plovers, a Red-necked Stint, eight Terek Sandpipers and a Grey-tailed Tattler were also seen. Thirteen Black-tailed Godwits were present on 10th. Other birds noted on the reserve included Black-winged Kites (two on 6th), and unseasonal Black-headed Gulls (one on 9th, three on 10th). 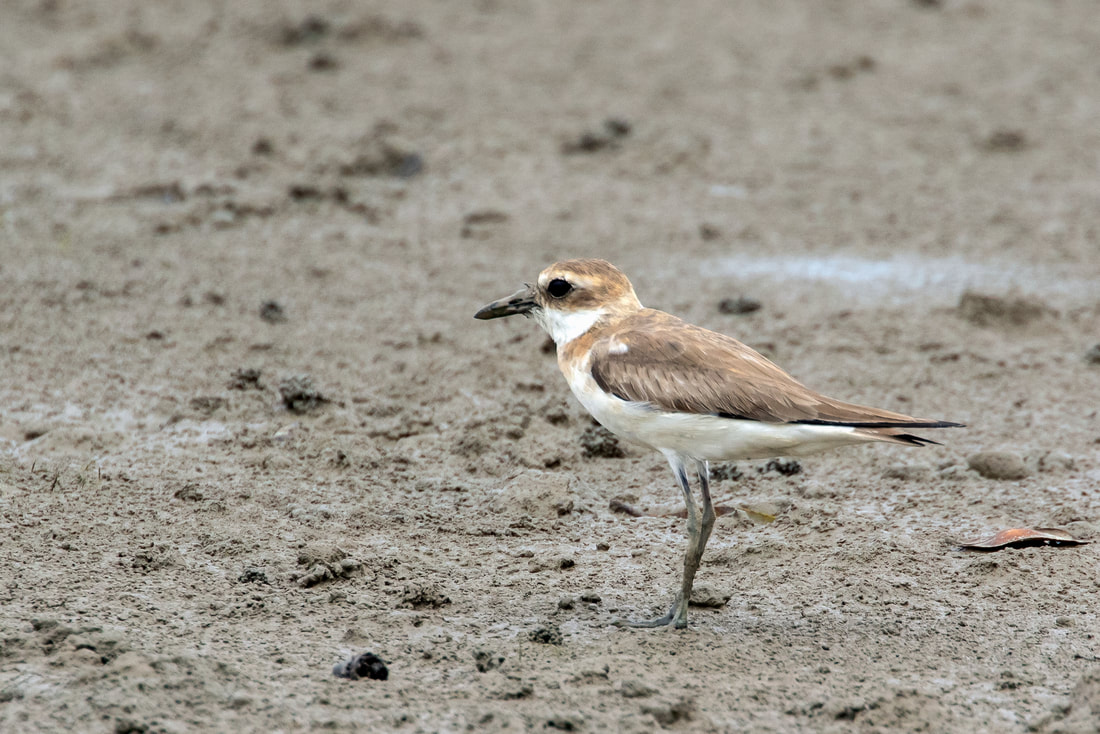 Greater Sand Plover at Mai Po, 9 July 2020
Of interest at Long Valley was the number of White-headed Munias seen. This Category III species has occasionally been reported from the area in recent months, with five were there on 20 May being a seemingly notable number at the time. However, a considerable flock has been seen there from late June onwards: 32 were reported on 30 June, and at least 79 were present on 3rd July. Up to three Chestnut Munias (Category IIC) have also been seen during the same period. See http://www.hkbws.org.hk/BBS/redirect.php?tid=29109&goto=lastpost#lastpost  for Derek Hon’s photos of the White-headed Munia flock.

These munias are attractive birds but occur no closer to southern China than south Vietnam. It seems that they have been released at or close to Long Valley en masse, most likely in a Buddhist ritual known as fangsheng. This so-called “mercy release” of animals from captivity into the wild is meant to generate positive karma for those doing the releasing. An interesting  article about the negative effects of this misguided activity can be found at
https://www.nationalgeographic.com/news/2017/01/wildlife-watch-mercy-release-buddhist-china-illegal-trade/ .
Other reports of note by date as follows;

On 1st, three Black Bulbuls and a White-rumped Shama (Category III) were at Shek Kong catchwater and, a Chinese Barbet was at Kap Lung in Tai Lam CP.

On 2nd, a Black-winged Kite was at Nam Sang Wai, and a Slaty-legged Crake was heard calling at Lam Tsuen at night.

On 3rd, a Black-winged Kite was at Tam Kon Chau near Mai Po.

On 5th, a Hodgson’s Hawk Cuckoo was at Tai Lam CP.

On 6th, two Slaty-legged Crakes were heard at Wun Yiu/Lin Au during the night bird survey; a Cinnamon Bittern was at Lok Ma Chau; two Black Bulbuls were reported from Tin Fu Tsai and three were at Tai Lam CP.

On 11th, a Lesser Cuckoo and a Chinese Barbet were at Tai Lam CP.

On 12th four Chinese Grassbirds, a Chinese Babax (Category IIC) and a Chinese Barbet were at Tai Mo Shan.
July 13-19 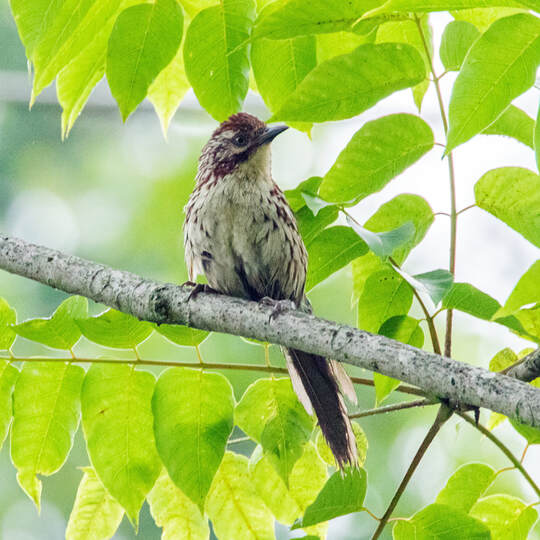 The status of Chinese Babax is somewhat contentious. First discovered on the mountain in 1959, it was originally placed in Category I (then Category A). However, as the closest site known to Hong Kong at the time was in northern Guangdong, and as the species seems to be largely sedentary, its status was later revised to Category IIA (then Category C) i.e. a self-sustaining resident population of captive origin. Sightings occurred between 1959 and 1964, and then again from 1977 to 2005. Never numerous - the highest count was a party of 14 birds on 25 August 1984 – there was a decline between 1999 and 2005, and there were no sightings between 2006 and 2010 (except for an ex-captive bird at Tai Po in 2009). The species was then placed in Category IIC i.e. a previously established feral species that is now, to all extents and purposes, extinct in Hong Kong. Odd birds recorded on the mountain between 2011 and 2015 were judged from photographs to show signs of cage damage. There were no official records from 2016 to 2019 (although there are, in fact, two unpublished records from 2017).

The recent sightings sparked an interesting discussion amongst local birders, with some of the opinion that the current birds are a residue of the original population that never quite became extinct. (In which case, it would need to be reclassified as a Category IIA species.) Recent sightings from mountains in the Shenzhen area also raise the possibility that the species could be of natural occurrence in southern Guangdong. (In which case, there might be an argument for it being a Category I species in Hong Kong, although there would seem to be insufficient evidence at the moment to justify this.)

A few other records during the week as follows:

The first Green Sandpiper of the autumn was at Lok Ma Chau on 15th.

At least 26 White-headed Munias remained at Long Valley on 17th. Nine Black-faced Spoonbills were at Mai Po on the same day.

On 18th, two Chinese Barbets were singing at Wong Chuk Shan, Ma On Shan CP. Eight Pacific Swifts were seen over Ng Tung Chai and a Lesser Cuckoo was  heard singing there at dusk.

A Gull-billed Tern was at Mai Po on 19th. Fifty Indochinese Yuhinas and a Lesser Cuckoo were at Ng Tung Chai.
July 20-31 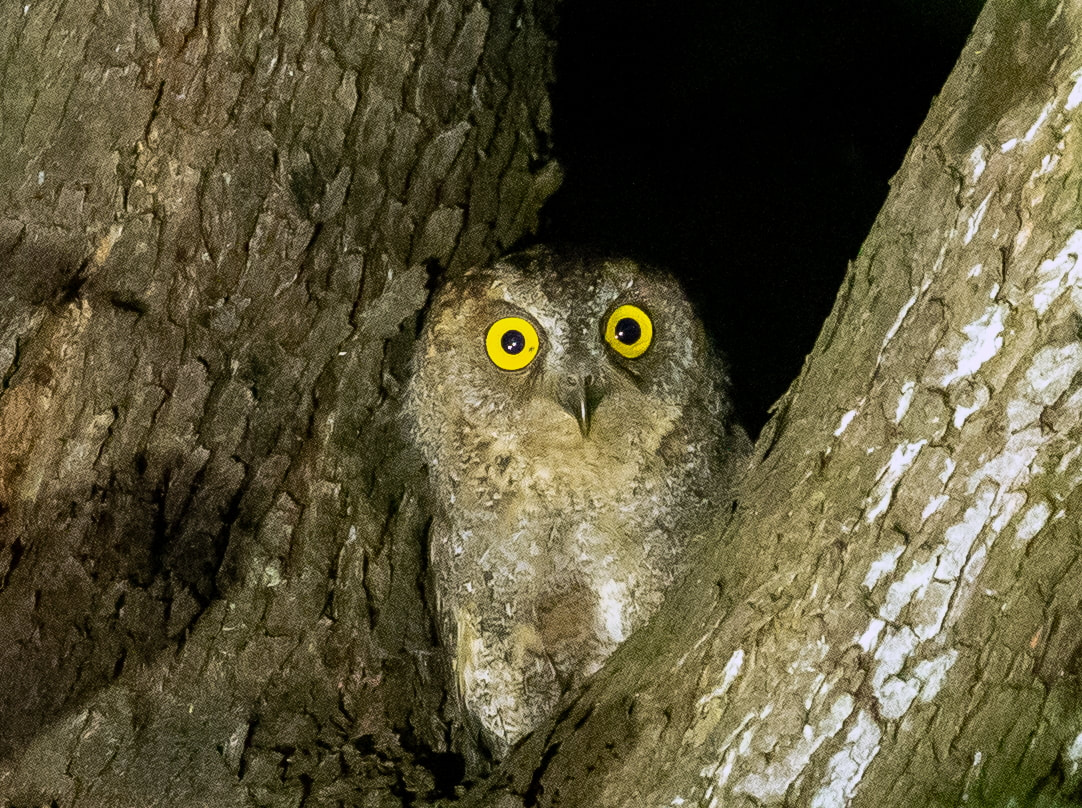 Ryukyu Scops Owl at Sheung Shui, 28 July 2020.
The weather was fine and hot (33⁰C most days) until the very end of the month. On 31st, a trough of low pressure over the South China Sea brought wind, cloud and rain to Hong Kong and the temperature dropped to a relatively pleasant 28⁰C.

Highlight of the month (and perhaps the year!) was a Ryukyu Scops Owl Otus elegans found by John Holmes at Sheung Shui.  The bird was actually heard briefly in the same area on 17 May but remained unidentified until its rediscovery on 25 July when it was not only heard, but seen, photographed and voice-recorded. Plumage-wise, the bird looks very similar to the Oriental Scops Owl, which is a scarce autumn migrant to the territory. However, its song is clearly indicative of Ryukyu Scops Owl, seemingly of the race botelensis which occurs on the island of Lanyu in Taiwan. This will be a first record for Hong Kong if accepted.

Also of note were two breeding records of Brown-breasted Flycatcher. An adult and two juveniles were present at Lau Shui Heung on 20th – one of the juveniles had to be released from the web of a Large Woodland Spider where it had become stuck. Two other juveniles were seen at Tai Po Kau on 28th.

Mai Po proved fairly productive, particularly at the end of the month. On 23rd, 97 Black-tailed Godwits were counted. On the afternoon of 29th, a Chinese Spot-billed Duck, a Tufted Duck, a Black-winged Kite, four Long-toed Stints, and a Eurasian Hobby were seen. On 30th, from the boardwalk on the falling tide, shorebirds present included 391 Greater Sand Plovers, the two over-summering Bar-tailed Godwits, 25 Black-tailed Godwits, a Red Knot, seven Curlew Sandpipers, five Red-necked Stints, an Asian Dowitcher, 139 Terek Sandpipers, and several Grey-tailed Tattlers, as well as a Gull-billed Tern and eight Black-faced Spoonbills. The Tufted Duck was again present on the main reserve.

Other records of interest as follows:

On 20th, a Black-winged Kite, 80 White-headed Munias and three Chestnut Munias were at Long Valley.

On 21st, a Cinnamon Bittern was at Lok Ma Chau.

On 25th, a Black-winged Kite was at Fung Lok Wai, and a Slaty-legged Crake was calling at night near Wonderland Villas.

The first Grey Wagtail of the autumn was at Lam Tsuen on 27th. On the same day an adult Bonelli’s Eagle was seen at Fanling, and 200 Bridled Terns and 18 Black-naped Terns were in Mirs Bay.

On 30th, a Little Tern, 12 Roseate Terns and 58 Black-naped Terns were off Peng Chau.

Two Malayan Night Herons were at Tai Tong on 31st.
********************
Please note that these are unchecked reports. Records of rarities and of unseasonal occurrences may be subject to assessment by the HKBWS Records Committee. A checklist showing species  for which a description is required can be found at the HKBWS website - http://www.hkbws.org.hk/BBS/viewthread.php?tid=28893&extra=page%3D1
All images & text © David Diskin unless otherwise stated
dadiskin@netvigator.com