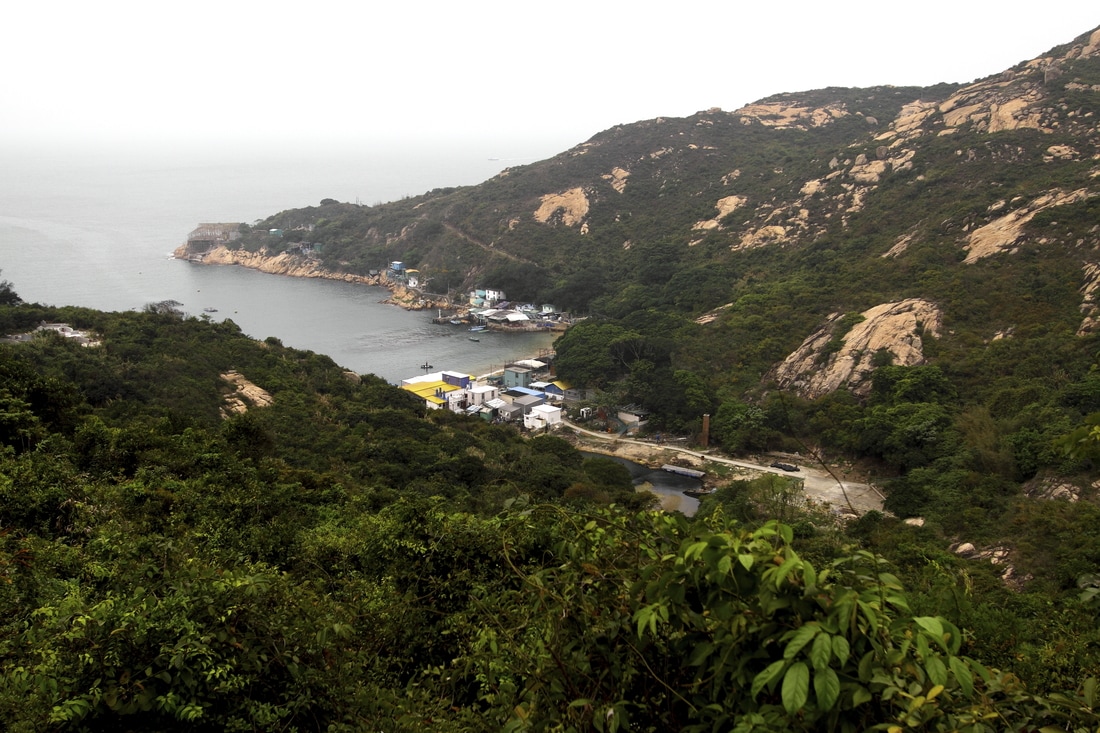 The main village, Tai Wan, on Po Toi Island
PO TOI ISLAND
Po Toi lies southeast of Hong Kong Island and is accessible by ferry from Aberdeen or, less frequently, from Stanley. Up until the 1960s the island had a resident population of about a thousand, but now only a handful of people remain. It is one of the key sites for migratory birds in the territory.

Its ornithological potential was first realised in 1997 when Paul Leader was commissioned to do an environmental survey of the island. On April 9th in that year, 41 Siberian Rubythroats, 17 Rufous-tailed Robins, a Narcissus Flycatcher and two Ferruginous Flycatchers were counted, along with small numbers of Grey-backed, Japanese and White’s Thrushes. A Long-tailed Jaeger passed by offshore.

Access to the island was limited, however, and it wasn’t until the number of ferries increased and Geoff Welch began to make a serious study of the birds in 2006 that Po Toi became established as one of the best ornithological sites in Hong Kong. Spring and autumn are the key seasons, with spring perhaps being the most productive time of the year. In addition to the regular migrants mentioned below, the island has also turned up a striking number of rarities, including several “firsts” for Hong Kong e.g. Olive-backed Sunbird (2016), Ijima’s Leaf Warbler (2015), Crow-billed Drongo (2014), Whistling Green Pigeon, Brown-backed Needletail and Varied Tit (2012). Three hundred and thirty-five species have been recorded from Po Toi so far, which is a high total, especially as there is very little freshwater on the island.

In spring, migrants occur from the last week of March to the third week of May, with different species being found at different times during this period. Many migrants head northeast from the Philippines and Borneo en route to their breeding areas in northeast Asia. In good weather many of these birds will bypass Hong Kong but if they meet bad weather – a cold front or depression – over the sea, they may drift west and make landfall on the first islands they come to -  the Dangan Islands  and Po Toi.

For further details see the papers by Geoff Welch in the Hong Kong Bird Reports 2007-08, and 2012. http://www.hkbws.org.hk/web/eng/bird_report_eng.htm 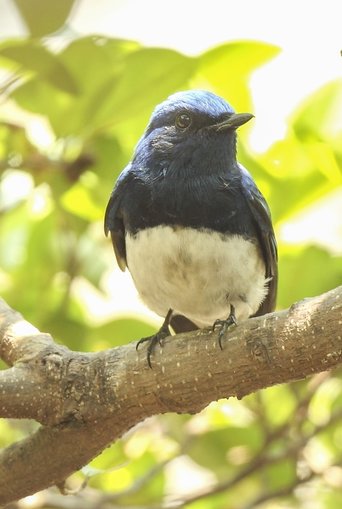 Blue-and-white Flycatcher
GETTING AROUND
The following account is adapted from the section on Po Toi in my book Hong Kong Nature Walks: Kowloon, Hong Kong & Outlying Islands. The map (click here)  is also from that book. Note that the circular route depicted is included from a general natural history standpoint. Most bird watchers would not do all of this walk. From a  birder’s perspective, I would suggest going no further from the village than Mo’s Old House and then backtracking. i.e. not doing the open scrub between Mo’s and the southern peninsula. The peninsula is best approached by walking southeast from the village.

Most of the island consists of hilly shrub land and exposed granitic rock. The key birding sites occupy a relatively small area -  the fung shui woodland and adjacent vegetation near the ferry pier and behind the main village.

The Ferry Journey
The harbour at Aberdeen has Black Kites and Little Egrets, and sometimes Pacific Reef Herons. Black Kites can also usually be seen hunting for flotsam over the sea between Aberdeen and Po Toi. Resident White-bellied Sea Eagles are seen occasionally.  From late March to May, Red-necked Phalaropes are sometimes observed from the ferry. Most other seabirds tend to move a little further to the south, although in April and May, terns may occasionally be seen in the Lamma channel. The other bird that you are likely to see migrating over the sea in spring is the Barn Swallow, which is a diurnal migrant. Terns might also be seen from the ferry in September: Common, Aleutian and Whiskered Terns have all been recorded, as have Bridled Terns and the uncommon Greater Crested Terns.


The Island
On arrival at the island, walk to the beginning of the pier and turn left. Follow the path up the slope and then turn right at a small stall.

Before doing this, however, you might like to scan the large, old trees between the pier and the café.  These trees are particularly good for migrants in spring.  In April, Chinese Sparrowhawk and Ashy Minivet are regular, and a number of flycatchers are likely to be seen. Look for Asian Brown, Ferruginous, Narcissus, and Blue-and white Flycatchers. Grey-streaked Flycatcher occurs later in spring. Wintering Yellow-browed and Pallas’s Leaf Warblers may also linger into April, and Arctic Warbler passes through mainly in May. Flycatchers also pass through in September but the mixture is not quite the same as in spring. Yellow-rumped Flycatcher and Dark-sided Flycatcher are regular then, whereas Ferruginous and Narcissus Flycatchers are very rare in autumn.  The old sports field near the café is also worth a look for buntings  and any of the small trails in the area around the café are  also worth exploring. 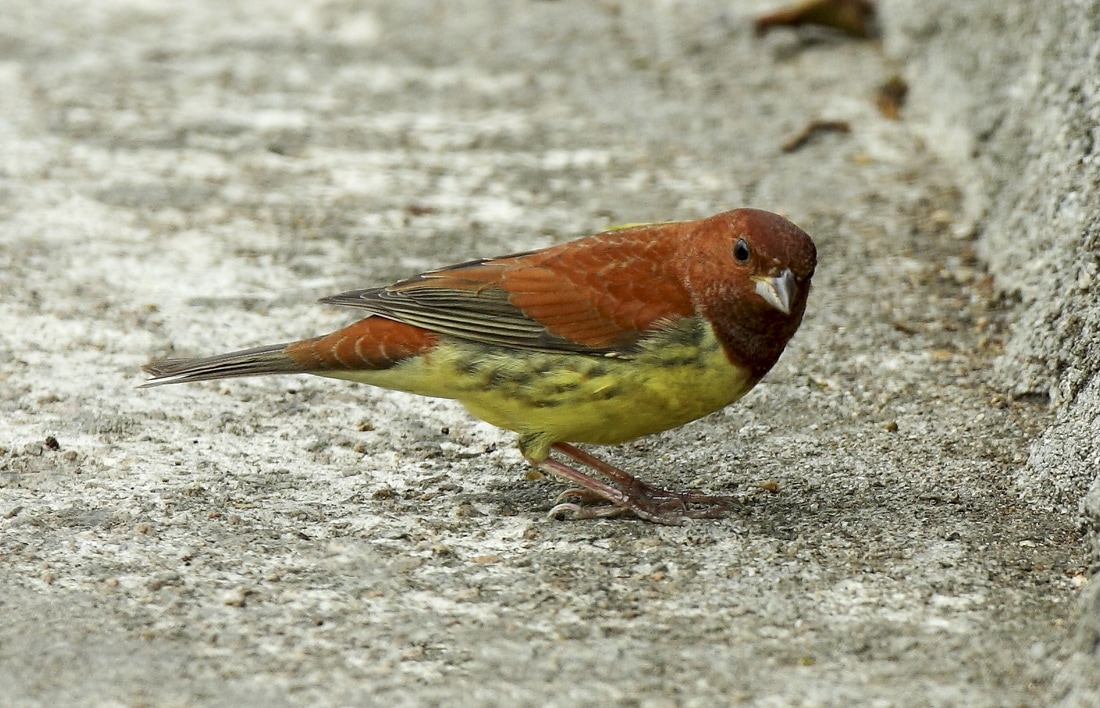 Chestnut Bunting
After turning right at the stall, take the steps on the left that are signposted “1 hr Route No 1” and “13 min to Mo’s Old House and Coffin Rock”. Walk up the steps that take you past the old school (1). The trees around the school are also worth a look for migrant birds; Narcissus Flycatcher in particular seems to prefer this area.

Many birders do not go much past the old school, but I like to go up to Mo’s Old House. There are signs here which state that you will be penalised for trespassing. Quite who is going to penalise you and what damage you can do is rather puzzling as the house is in ruins. It is rumoured to be haunted. It was used by the Japanese as an observation post during the Second World War. Since then, the trees have reclaimed the land and this is the highest point on the island that the woodland extends to. The trees around the decrepit building can be good for thrushes; you may find migrating Eyebrowed Thrushes in April. In November, birds such as Red-flanked Bluetail, Daurian Redstart, Yellow-browed Warbler, Mountain Tailorbird and Mugimaki Flycatcher might be seen here.

Back track from here and head down the steps towards the village. Turn right at the restaurant towards the public toilets. The woodland behind the toilets (and along the path towards the Tin Hau temple) often holds birds. The creek opposite the toilets can sometimes have birds such as Common Kingfisher, and migrant herons. Yellow Bittern, Schrenck’s Bittern and Black Bittern might occur, particularly after stormy weather in May. The area around the helipad might also have birds.

If you have the time and inclination, walk back past the café and head along the coastal path to the southern peninsula. Rock and grass-haunting birds can be found here such as resident Lesser Coucal and migrant Blue Rock Thrush and Golden-headed Cisticola.  The rocks at the tip of the peninsula  can be productive for seabirds in spring (see the paper by Geoff Welch in the 2013 Bird Report) but for the day-visitor, the time you have on the island is not good for sea watching.
GETTING THERE
There are no ferry services to Po Toi on Monday, Wednesday and Friday.
Ferries depart Aberdeen on Tuesday & Thursday at 10.00 a.m., returning from Po Toi at 3.30 p.m.
On Saturday, the ferry departs Aberdeen at 10.00 a.m. and 3.00 p.m., returning from Po Toi at 2.00 p.m. and 4.00 p.m.
On Sunday, the ferry departs Aberdeen at 8.15 a.m., returning from Po Toi at 6.00 p.m.  There is a service from Stanley on Sunday: ferries depart Stanley at 10.00 a.m., 11.30 a.m., 3.30 p.m. and  5.00 p.m. Ferries from Po Toi to Stanley leave at 9.15 a.m., 3.00 p.m. and 4.30 p.m.

Essentially, you need to get a morning ferry to the island and an afternoon ferry back to the mainland. The weekday ferries only give you three hours on the island. Better is Saturday, catching the 10.00 a.m. ferry and returning on the 4.00 p.m. ferry.

The above timetable details can be checked at    http://www.traway.com.hk.

Thanks to Geoff Welch for answering my queries on Po Toi.

The above account is adapted from my book “Hong Kong Nature Walks:  Kowloon, Hong Kong & Outlying Islands".
All text and photographs are © David Diskin