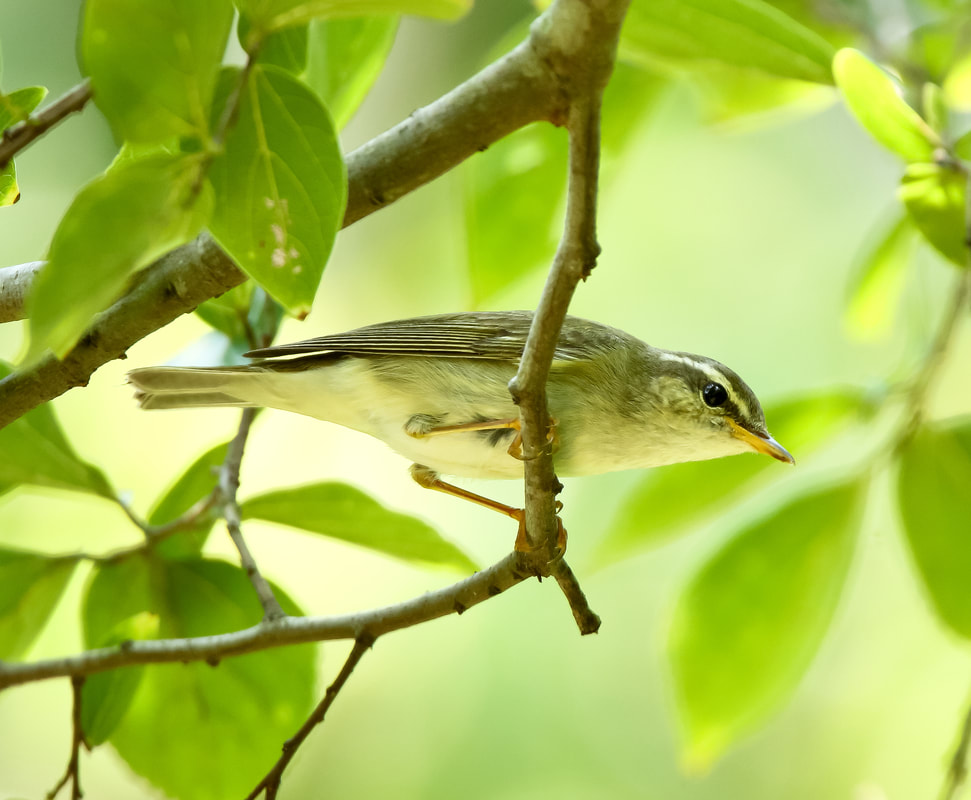 Arctic Warbler at Mai Po (archive photograph)
LATEST SIGHTINGS - September 2017
September 1-5
September began with rainy unsettled weather caused by the passage of yet another tropical cyclone – the third in two weeks to affect the region. Severe tropical storm Mawar made landfall on the night of  the 3rd to the east of Hong Kong and then passed to the north. It brought squally showers but wind speeds were much lower than during the previous two storms; typhoon signal number 3 was hoisted on the morning of the 4th for a few hours.

Records of note at Mai Po were a Eurasian Hoopoe on 1st, a Black-winged Kite on 2nd, and a Swinhoe’s Egret, a Common Tern and  two Garganeys on 3rd.

Three Amur Paradise-flycatchers, an Arctic Warbler and a Speckled Piculet were at Pak Sha O on  2nd.

On 10th, a tired Eastern Crowned Warbler was found on the floor in Mei Foo mall and released in a nearby park. Shek Kong catchwater had Amur Paradise-flycatcher, Grey-streaked, Asian Brown and Hainan Blue Flycatchers, and a Pale-legged/Sakhalin Leaf Warbler.
September 11-17 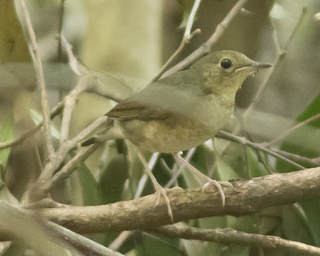 Female Siberian Blue Robin (record shot), Lau Shui Heung, September 16 2017
The days continued to be hot (36⁰C at Sheung Shui on 16th!), humid and showery, although a  north-easterly wind from the 13th onwards had a slight cooling effect, bringing the first vague hint  of autumn. Two more tropical cyclones passed well to the northeast and southwest of the territory.

A couple of belated reports: a Styan’s Grasshopper Warbler was trapped at Mai Po on 8th and there were a few migrants at Po Toi on 10th, including Brown Shrike, Asian Brown Flycatcher and Grey-streaked Flycatcher.


The HK Bird Ringing Group that mist-nests in one of the reed beds at Mai Po caught a Middendorff’s Grasshopper Warbler and a Manchurian Reed Warbler on 12th. The Middendorff’s is only the sixth record for Hong Kong. Also at Mai Po on the 12th there were single Asian Dowitcher, Sharp-tailed Sandpiper and Far Eastern Curlew among the waders on the mud flats. The over-summering sub-adult Caspian Gull (mongolicus) was also present. On the main reserve an all-dark swiftlet passed through after a thunderstorm; this is apparently the first dark-rumped swiftlet to be reported in Hong Kong since 1994. The identity of such birds remains a mystery.

On 14th, two Arctic Warblers and single Hainan Blue, Yellow-rumped and  Blue-and-white Flycatchers were seen at Shek Kong catchwater where there was also a good count of 15 Grey Treepies. An Amur Paradise-flycatcher was on Cheung Chau on the same day and one or two Ashy Minivets were at Lung Fu Shan on HK Island. A Siberian Blue Robin, Oriental Dollarbird, Black-capped Kingfisher  and two Arctic Warblers were seen on Po Toi.

On 15th, there was a record count of 107 Intermediate Egrets at Lok Ma Chau. At San Tin there were eight Whiskered Terns and a Stejneger’s Stonechat.  A Tiger Shrike was seen along the red walk at Tai Po Kau.

Saturday 16th saw several observers out in the field and it soon became obvious that there had been a considerable influx of migrants into the territory.  Amur Paradise-flycatchers, Asian Brown Flycatchers (including six on Po Toi), Arctic Warblers (including five on Po Toi) and Pale-legged/Sakhalin Leaf Warblers appeared widespread as they were all reported from three or more different locations. At least eight Siberian Blue Robins were seen, which is an impressive day-count for this scarce, enigmatic migrant.  Sightings of note were:
Crested Honey Buzzard: one at Shek Kong catchwater
Oriental Cuckoo: singles at Lau Shui Heung and Ho Man Tin
Black-winged Cuckooshrike: singles at Tai Po Kau and Shek Kong catchwater
Oriental Dollarbird: two on Po Toi
Eurasian Hoopoe: one on Po Toi
Tiger Shrike: one at Ho Man Tin
Eastern Crowned Warbler: singles at Tai Po Kau and Shek Kong catchwater
Blue-and-white Flycatcher: one on Po Toi
Siberian Blue Robin: four at Tai Po Kau, two at Lau Shui Heung, singles at Mai Po and Ho Man Tin
Slaty-backed Forktail: one at Shing Mun
Yellow-rumped Flycatcher: singles at Tai Po Kau and Po Toi.

On 17th, a Siberian Blue Robin and an Orange-headed Thrush were seen at Ng Tung Chai, along with four Arctic Warblers, two Pale-legged/Sakhalin Leaf Warblers and a Hainan Blue Flycatcher.  The Tiger Shrike remained at Ho Man Tin, where a Thick-billed Warbler and a female Blue-and-white Flycatcher were also present. Eight Oriental Dollarbirds were  at Wonderland Villas near Kwai Chung. Birds seen from the Mai Po boardwalk on the receding tide included an Eastern Marsh Harrier, six Red Knots and a Nordmann's Greenshank (rare in autumn).
September 18-24 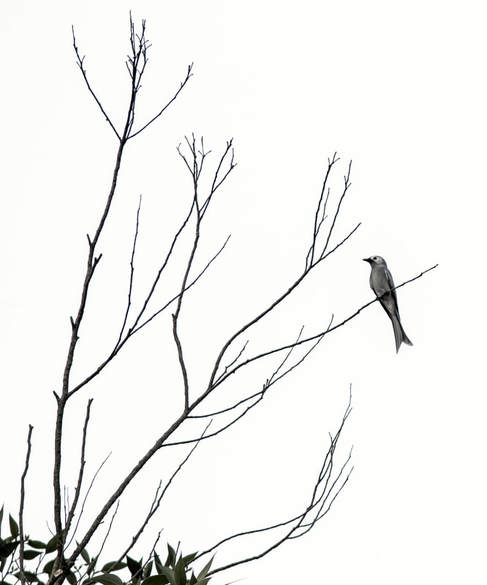 Ashy Drongo, Shek Kong catchwater, September 19 2017
It was generally hot and sunny with temperatures in the low 30s ( degrees Celsius), becoming showery towards the weekend. Migration remained strong during the first three days of the week when there  were fairly widespread reports of Oriental Dollarbirds, Brown Shrikes, Arctic Warblers, Pale-legged/Sakhalin Leaf Warblers  and Asian Brown Flycatchers,  but became far less intense after 20th.

On 20th, sightings at Lam Tsuen included 12 Oriental Dollarbirds, an Ashy Drongo, a Black-winged Cuckooshrike and three Golden-headed Cisticolas. A Japanese Paradise Flycatcher occurred at Shing Mun and there was a Eurasian Wryneck at Chek Lap Kok. One lucky birder resident in urban Kowloon found a Slaty-legged Crake on his patio; fortunately the bird had not hit any windows and flew away safely.

A trickle of arriving winter visitors were  noted at Mai Po during the week. These consisted of at least four Great Cormorants on 20th, two Northern Pintails and a Tufted Duck on 22nd; the first Black-faced Spoonbill on 23rd (with two on 24th) and a Northern Shoveler on 24th. Other records of interest from the reserve were six Black-naped Orioles and 490 Garganeys on 22nd, the Nordmann’s Greenshank (first seen on 17th) until at least 23rd,  the over-summering Caspian Gull (mongolicus) until at least 24th, and Swinhoe's Egret on 24th.

Elsewhere, a Pechora Pipit was at Ho Man Tin on 22nd, and Long Valley had a Eurasian Hobby, a Pallas’s Grasshopper Warbler and a Chinese Grosbeak on 23rd. There were five Whiskered Terns at San Tin on 24th. A Yellow-rumped Flycatcher was photographed at Tsing Yi on 24th.

Finally, photos of the "Oriental" Cuckoo at Po Toi on 19th were recently posted on the HKBWS website and the bird has  been re-identified by Paul Leader as Lesser Cuckoo. See http://www.hkbws.org.hk/BBS/redirect.php?tid=26623&goto=lastpost#lastpost .
September 25-30
The seemingly never-ending summer dragged on with temperatures up to 35⁰C in the New Territories. A slight surge of the northeast monsoon on the last day of the month brought some welcome rain to the territory in the morning but the afternoon reverted to form, becoming  hot and humid.

An Orange-headed Thrush, Blue Rock Thrush, Amur Paradise-flycatcher and Siberian Blue Robin were at Ho Man Tin on 27th. A Dusky Warbler and Richard’s Pipit were at Long Valley.

A Forest Wagtail and Oriental Dollarbird were in the Shui Hau-Lo Kei Wan area of southern Lantau on 28th, and a Japanese Sparrowhawk and ten Pacific Swifts were at Shek Pik viewpoint. The same Lantau-based observer also saw about 60 distant mid-sized raptors – probably Grey-faced Buzzards -  soaring above the Soko Islands in two tight groups; this would be an exceptional count for this species in autumn.