Birding Hong Kong
LATEST SIGHTINGS - FEBRUARY 2019
February 1-10
The first month of 2019 was the third mildest January on record and the temperate weather continued into February, with temperatures reaching an unseasonable 27⁰C during Chinese New Year. A replenishment of the northeast monsoon over the weekend of 9th & 10th brought slightly cooler weather to south China.

The Fire-capped Tit remained at KFBG until 3rd. There were no further reports of Mrs Gould’s Sunbird.

The juvenile Hen Harrier was again seen at Mai Po on 1st & 2nd. The wintering Rook remained in the Mai Po/Lut Chau area until at least 3rd. Four Chinese Spot-billed Ducks were seen at the reserve on 5th and single Falcated Ducks were reported on 6th & 10th. A Common Chiffchaff was trapped on 6th. Three breeding-plumaged Pallas’s Gulls were off the boardwalk on 9th.

An Ashy Drongo of the dark form hopwoodi was in Tai Lam CP on 1st. A Thick-billed Green Pigeon was seen briefly (and photographed) at South Horizons  near Aberdeen on 2nd.

The Marten’s Warbler was again at Ho Pui reservoir on 4th. A Pale-legged Leaf Warbler was reported from the same location on 5th.

A Chinese Barbet was seen in the main bird wave at Tai Po Kau on 5th. Wintering warblers continued to be recorded: two White-spectacled Warblers on 6th, Eastern Crowned Warbler on 9th, and Sulphur-breasted Warbler and Chestnut-crowned Warbler until 10th.

The two Common Pochards remained at San Tin throughout. The two Slaty-backed Forktails were at Shing Mun on 6th.
February 11-17 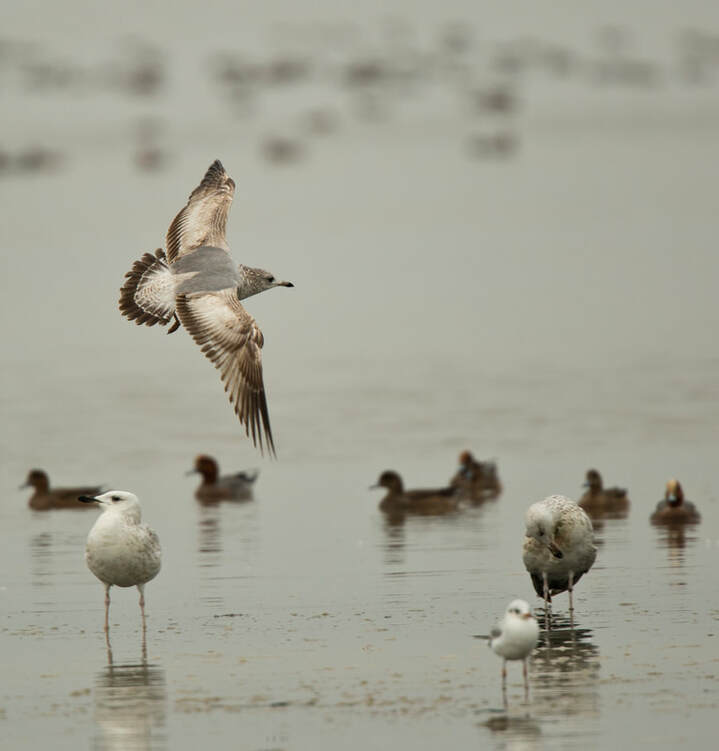 Mew (Kamchatka) Gull at Mai Po (Birding Hong Kong archive)
Generally warm during the week with temperatures reaching an unseasonable high of 28⁰C  in the New Territories on 16th. A trough of low pressure brought cloudy weather and fresh winds on 17th, causing the temperature to fall to 21⁰C.

There was a feel of spring in the air during the week. The first Barn Swallows arrived to breed in the villages out in the New Territories. Asian Koels were calling in widespread areas. At Tai Po Kau, male Scarlet Minivets were conspicuous in their display flight, and along the red walk a pair of Grey-chinned Minivets were nest-building.

Also at Tai Po Kau, the Chinese Barbet continued to be heard, and occasionally seen, along the lower section of the red walk throughout the week, and two different birds were heard on 17th.  The bird wave in that area continued to hold the scarcer warblers, with both Chestnut-crowned & Sulphur-breasted Warblers still present on 17th.

The Rook was still at Mai Po on 16th, and the juvenile Hen Harrier was reported coming into roost at dusk at the southern end of the reserve on 14th & 15th. Two Pallas’s Gulls were still out on the mud flats on 17th; other gulls of interest during the week were two nominate Vega Gulls and a Black-tailed Gull on 15th and a Mew (Kamchatka) Gull on 17th. Up to eight Caspian Terns were seen during the week, and a Gull-billed Tern was present on 12th & 17th. Other birds of note on the reserve were a Pacific Swift on 11th, a Falcated Duck and a Long-billed Dowitcher on 15th, a Ruff on 16th, a Baikal Bush Warbler singing in the ringers’ reed bed on 16th, and a Eurasian Sparrowhawk on 17th.

Elsewhere, 13 Grey-capped Greenfinches were at Tai Mei Tuk on 12th, a Grey Nightjar was calling at Uk Tau on 14th, and a Long-billed Dowitcher was at HK Wetland Park on 15th.
February 18-28
Unsettled weather. Heavy rain – unusual for February - on 18th & 19th was followed by warm, humid days with temperatures reaching 25⁰C  on 20th & 21st. A blast of the northeast monsoon from 23rd caused temperatures in the New Territories to fall to 11⁰C on 24th. The weather remained grey and cloudy until the 27th when the sun came out and temperatures rose to 28⁰C on the last day of the month.

An Arctic Warbler was reported calling at Ho Man Tin on 19th, and Radde’s Warbler, Grey-backed Thrush and  Red-flanked Bluetail were seen there on 20th. (Thrushes and Bluetails have been scarce in Hong Kong again this winter.)

At Tai Po Kau, the Chestnut-crowned Warbler was seen on 23rd and the Sulphur-breasted Warbler was still present on 26th. The Chinese Barbet was also heard on 26th.

The HK Wetland Park held Long-billed Dowitcher on 24th & 25th (a different bird from the one at Mai P0),  and a male White Wagtail of the race lugens was seen on a drained pond from the Fishpond Hide on 24th.

The wintering Smew was still at San Tin on 26th, and a Pacific Swift was seen over the ponds amongst House Swifts on 23rd.

A Lanceolated Warbler (scarce in winter) was at Lam Tsuen on 22nd. More surprising was a Swinhoe’s Minivet there on 27th. This is the first winter record of this species for Hong Kong, the previous earliest date for a spring migrant being  25 March.

On 27th, a frigatebird sp. (most likely Lesser Frigatebird) was photographed as it flew over the Central ferry pier.
All images & text © David Diskin unless otherwise stated
dadiskin@netvigator.com