Birding Hong Kong
LATEST SIGHTINGS - MARCH 2019
March 1-10
Fork-tailed Sunbird and Orange-bellied Leafbird on Coral Tree Flowers, Tai Po Kau (Birding Hong Kong archive)
The 2018/19 winter (December to February) was the warmest on record. The first few days of March  proved to be more typical for the time of year, being grey and miserable.  A trough of low pressure brought rain, sometimes heavy, to the territory. Temperatures ranged from 15-21⁰C for most of the period.

The highlight of early March was Mrs Gould’s Sunbird. An immature male was at KFBG on 4th and a much-photographed adult male was at Tai Po Kau from 4th until at least 8th. See http://www.hkbws.org.hk/BBS/viewthread.php?tid=28026 .

The Avifauna of Hong Kong reported three records of this very colourful sunbird (1988, 1990 and 1998) but these were considered to be ex-captive birds. The first accepted record of a wild bird was a male at Tai Po Kau from 22nd to 30th January 2005. There were eleven further records of the species between 2006 and 2018, all in the period 15 January to 6 April, which coincides with the flowering season of Coral Trees Erythrina spp. in Hong Kong. The most birds present at a single location were two males and a female at KFBG from 24 February to 27 March 2014.

Four races of Mrs Gould’s Sunbird occur in the Oriental region, two of them in China. The one that occurs in Hong Kong is Aethopyga gouldiae dabryii. This subspecies breeds in  extreme northeast India, Myanmar, north Indochina, and in central  & southwest  China east to Guangxi. Some are known to winter in southern Myanmar and northern Thailand, and based on the Hong Kong records, it is evident that some birds also wander to the coastal areas of southern China.

A Large Hawk Cuckoo and a Plaintive Cuckoo were heard singing in the Lam Tsuen valley on 1st. (This was, however, not the first report of Large Hawk Cuckoo in the territory; birds were heard at Shek Kong catchwater on 23rd February and at  Lantau Peak on 24th February.)

Mai Po held a 1st-winter Pallas’s Gull, two Black-tailed Gulls and a Caspian Tern on 1st. On 8th, signs of shorebird movement were evinced by the presence of ten Curlew Sandpipers and six Broad-billed Sandpipers; other sightings included a Far Eastern Curlew, four Pallas’s Gulls, a Slaty-backed Gull, a Gull-billed tern and  three Caspian Terns. On 9th, a Long- billed Dowitcher, three Black-tailed Gulls and two Pallas’s Gulls were noted, and a Lanceolated Warbler was singing along the access road.

The HK Wetland Park had a Long-billed Dowitcher on 3rd. An Eastern Water Rail was at Long Valley on 8th. 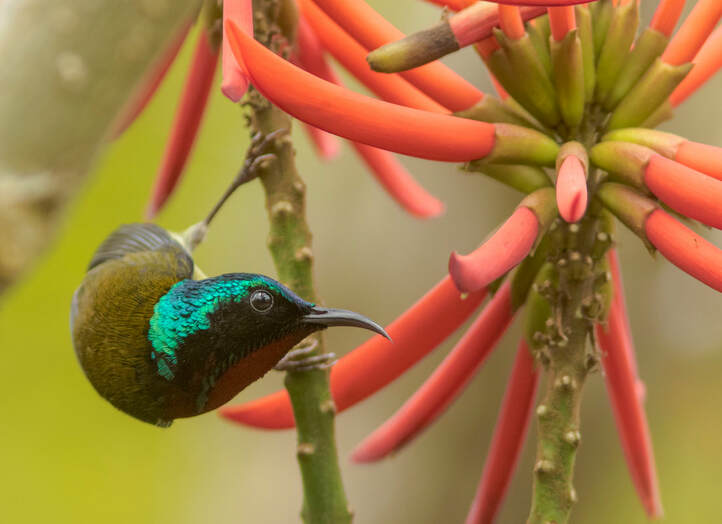 Fork-tailed Sunbird on Coral Tree flower, Tai Po Kau (Birding Hong Kong archive)
March 11-17
Fine and dry at the beginning and end of the week, but fresh easterlies/northeasterlies from 13th to 15th brought cooler temperatures and rain to the territory.
Wintering birds continued to be recorded and there was also evidence of spring migration. Reports included: 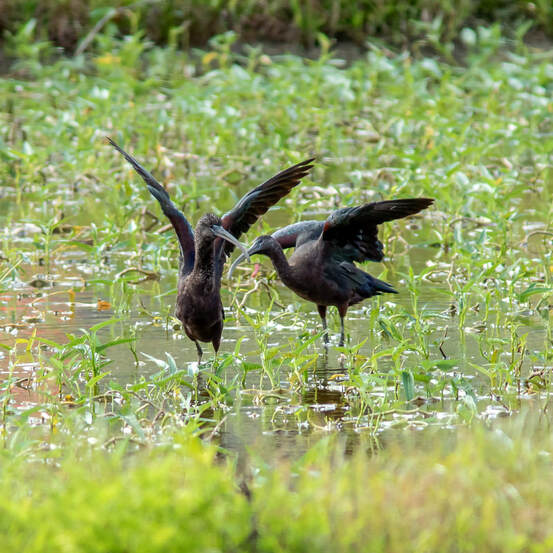 Glossy Ibis at Ho Sheung Heung, 21 March 2019
The weather during the week was dominated by a warm and humid  maritime airstream from the southeast with temperatures in the New Territories up to 28⁰C. This changed on the evening of the 22nd when a cold front swept in from the northeast bringing cloud, rain and cooler temperatures.

The main event of the week was the arrival of two Glossy Ibis at Mai Po on 20th. The birds were seen only briefly before they disappeared; fortunately they were rediscovered at Long Valley on 21st where they remained through 22nd. However, there was no sign of them on 23rd or 24th. There have only been two previous records of this species in Hong Kong – both singles and both at Mai Po - on 21 April 1978 and 1st – 2nd May 1994.

Eight Oriental Pratincoles were at Chek Lap Kok on 21st and two Long-billed Dowitchers were at HK Wetland Park on 22nd.

Also on 24th, an Eastern Crowned Warbler and a  Bull-headed Shrike were at Tai Tong. 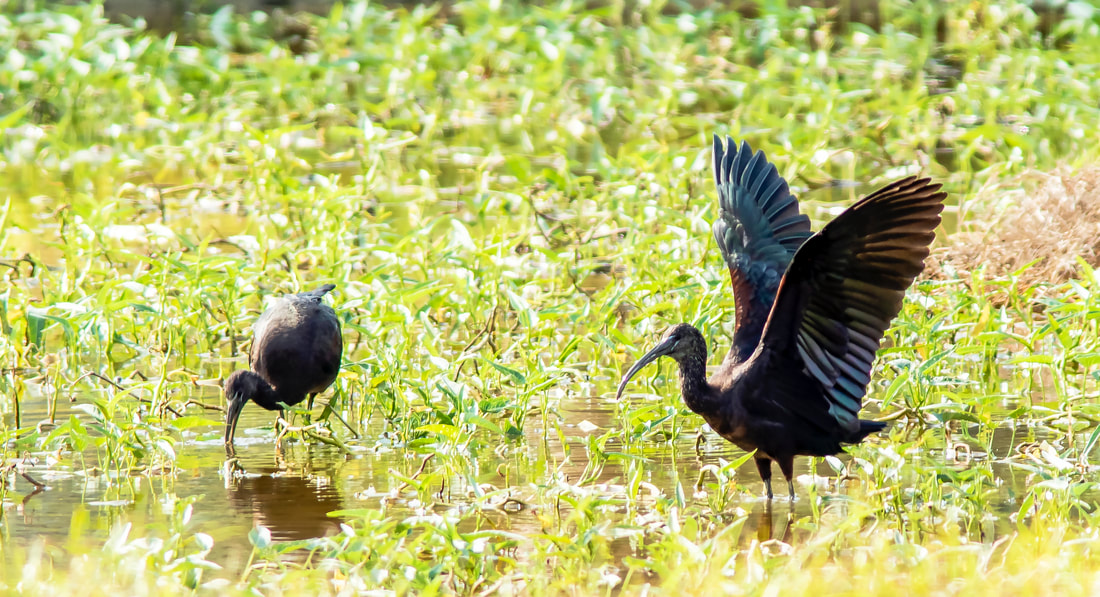 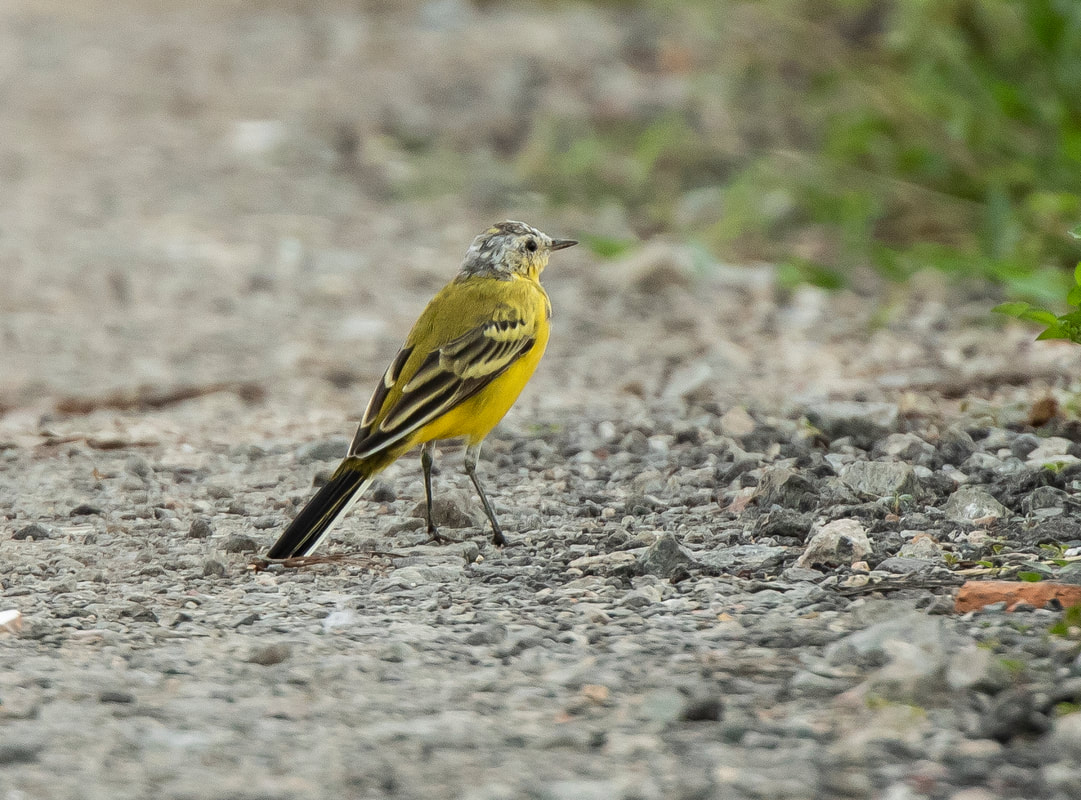 Western Yellow Wagtail Motacilla flava leucocephala at Lut Chau, 28 March 2019
The weather was generally warm and humid with temperatures reaching 27⁰C on 28th. A surge of the northeast monsoon on the last two days of the month brought fresh easterly winds and slightly cooler weather to the territory.

Bird-wise, the week was of great interest with a good number of migrants around and a potential first record of Western Yellow Wagtail and a possible second record of Zappey’s Flycatcher, although neither bird is proving  uncontentious when it comes to identification.

Records of note were:
Japanese Quail: one at Lut Chau on 31st
Glossy Ibis: the two birds were re-discovered at Nam Sang Wai on 25th; they remained in the area throughout the week
Cinnamon Bittern: one at Pak Nai on 30th
Malayan Night Heron: one near Tai Po Kau on 27th – a new arrival date for this species, previous earliest being 7 April.
Grey-faced Buzzard: eight at Lok Ma Chau, one at Clearwater Bay and five at Long Valley on 25th, one at Sha Lo Tung and four at Tai Po Kau on 26th
Eastern Water Rail: one at Long Valley on 26th
Oriental Plover: one at Mai Po on 31st
Curlew Sandpiper: 300 at Mai Po on 26th
Long-billed Dowitcher: one at the Wetland Park on 25th, and one at Mai Po on 26th & 30th
Red-necked Phalarope: one at Lai Chi Wo and four at Clearwater Bay on 25th, eight at Long Valley on 26th
Nordmann’s Greenshank: one at Mai Po on 26th
Oriental  Pratincole: nine at Mai Po on 26th
Saunders’s Gull: three at Mai Po on 26th
Pallas’s Gull: two at Mai Po on 30th
Caspian Tern: at least 60 at Mai Po on 30th
Barred Cuckoo Dove: one singing at Tai Mo Shan on 28th
Square-tailed Drongo Cuckoo: one heard near Tuen Mun on 29th; a new arrival  date, the previous earliest being 16 April
Hodgson’s Hawk Cuckoo: one heard at Ho Pui reservoir on 26th
Oriental Cuckoo: one reported from Mai Po on 25th
Grey Nightjar: one heard at Wonderland Villas on 29th
Himalayan Swiftlet: one at Shuen Wan on 26th
Silver-backed Needletail: one at Lok Ma Chau on 25th, 12 at Shek Kong catchwater on 31st
Eurasian Hoopoe: one at Po Toi 26th
Chinese Barbet: one singing at Tai Po Kau on 26th and 31st
Ashy Minivet: two at Clearwater Bay on 25th, four at Po Toi on 26th & 28th.
Hume’s Leaf Warbler: one singing at Tai Mo Shan on 28th. This is the first March record for this species,  extreme dates being 14th October – 21st February, and 8th – 13th April.
Orange-headed Thrush: one at Ho Man Tin on 31st
Hainan Blue Flycatcher: one at Tai Po Kau on 31st
Zappey's   Flycatcher (?) at the Peak, 29th March 2019 - photographs © Richard White
Zappey’s Flycatcher: a blue-and-white flycatcher photographed by Richard White - a visiting birder - at the Peak on 29th (see above) was identified as a Zappey’s Flycatcher from the images -  a potential second record for Hong Kong. However, those in search of the flycatcher on the following day found what was clearly a Blue-and-white Flycatcher of the race intermedia in the same tree. So, either a)  two different birds were involved – a Zappey’s Flycatcher on 29th and a Blue-and-white Flycatcher intermedia on 30th, or b)  something in the photographic process (exposure, angle of view, light…?) is inadvertently creating a false impression and, in some cameras at least,  rendering the lores darker and more contrasting than they actually appear in the field. The first and only record of Zappey's Flycatcher in Hong Kong to date was at Po Toi on 19th October 2008. For a photo of this bird, see:
http://orientalbirdimages.org/search.php?Bird_Image_ID=32982&Bird_ID=2945&Bird_Family_ID=&Location=
Blue-and-white Flycatcher: one of the race intermedia at the Peak on 30th; one (nominate race?) at Tai Po Kau on 31st
Narcissus Flycatcher: five at Ho Man Tin and one at Tai Po Kau on  31st
Western Yellow Wagtail: a bird showing features of the white-headed race Motacilla flava leucocephala  was at Lut Chau from 28th to 31st. A first record for Hong Kong if accepted
Citrine Wagtail: one at Long Valley on 27th.
Black-headed Bunting: one at Po Toi on 30th. 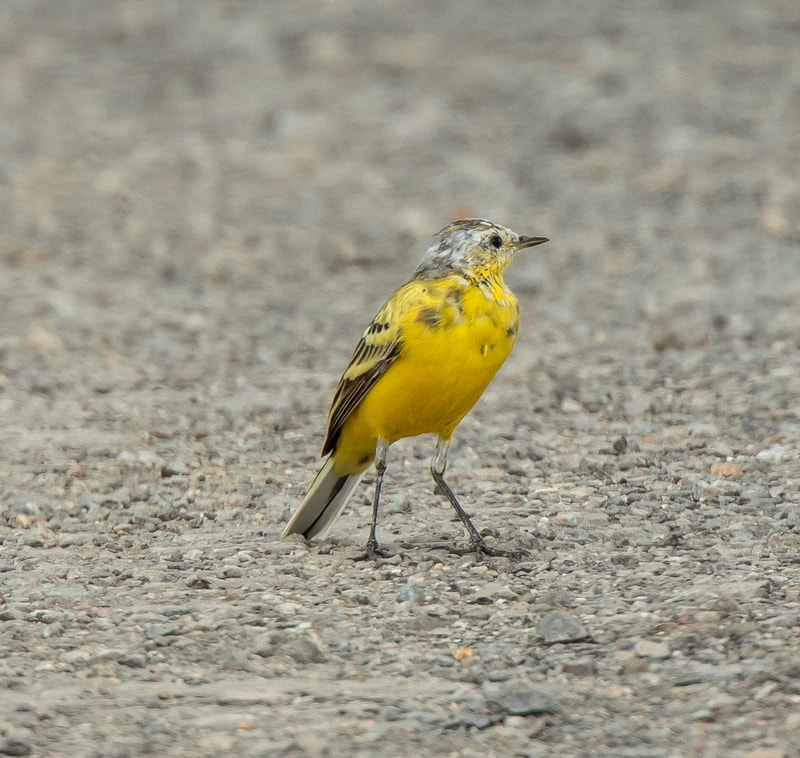 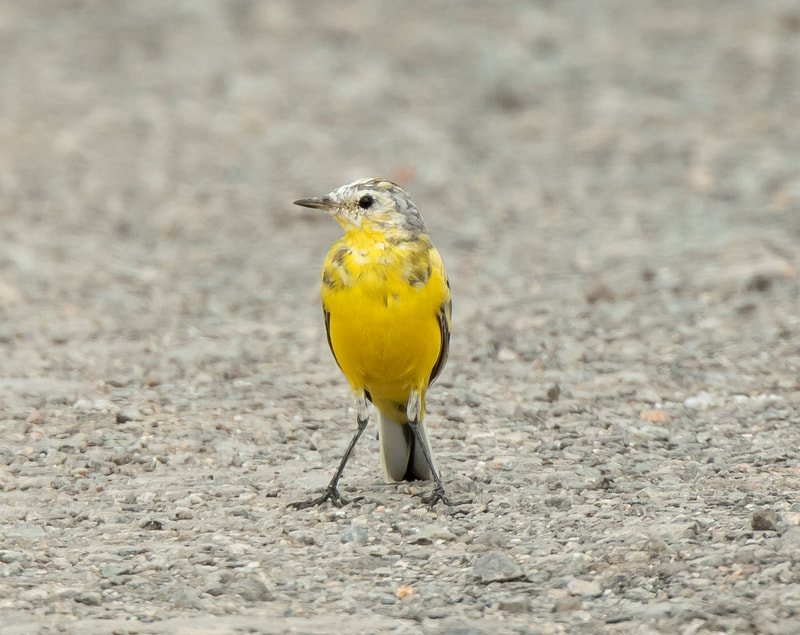 Western Yellow Wagtail Motacilla flava leucocephala at Lut Chau, 28 March 2019 (click on the images to enlarge them)
With special  thanks to Richard White for allowing me to publish his photographs of the (possible) Zappey's Flycatcher.
All images & text © David Diskin unless otherwise stated
dadiskin@netvigator.com