Birding Hong Kong
LATEST SIGHTINGS -  DECEMBER 2019
December  1-8
A replenishment  of the northeast monsoon caused temperatures to drop to 11⁰C  at night in the New Territories, although it was generally fine and dry during the day with fresh northerly winds.

The Japanese Night Heron remained at Pak Tam Chung throughout the week. The Black-necked Grebe was last reported from San Tin on 1st. Two Rufous-faced Warblers were at Tai Po Kau on 1st, one was at Ho Man Tin from 4th – 7th, and one was at Pak Sha O on 7th.

There was an interesting late surge of Black-naped Oriole sightings, with singles at Ho Man Tin and Chung Mei on 4th, and Po Toi and Lamma on 5th.

At Tai Lam CP, up to 60 Indochinese Yuhinas were seen during the week. A Hume’s Leaf Warbler was present on 2nd & 4th; also reported on 4th were a male Fujian Niltava, an Eastern Crowned Warbler, a Radde’s Warbler, a White’s Thrush, seven Tristram’s Buntings and a  Chestnut Bunting. The highlight on 6th were two Japanese Robins, one of them being a stunning adult male. The male was noted again on 8th.

A Dusky Thrush was at the Peak on 3rd & 4th. A Small Niltava was at Wu Kau Tang on 4th.

Also on 4th, a Black Stork turned up at Mai Po and remained until the morning of the 6th when it was seen heading off west. Two Mallards were present on the reserve on 7th, and 20 ​Northern Lapwings were reported on 8th.

On 5th, a White’s Thrush , a Pale Thrush, a Radde’s Warbler and a Yellow-browed Bunting were seen on Po Toi, and  two Himalayan Swiftlets and a Common House Martin were at Tai Sang Wai.

On 7th, a Bianchi’s Warbler was at Pak Sha O.

On 8th a Mallard was seen at Kam Tin.

UPDATE: At Tai Lam CP  on 8th, a female Japanese Robin in addition to the male mentioned above, and at least five (!)  Rufous-faced Warblers in a bird wave.
December  9-15 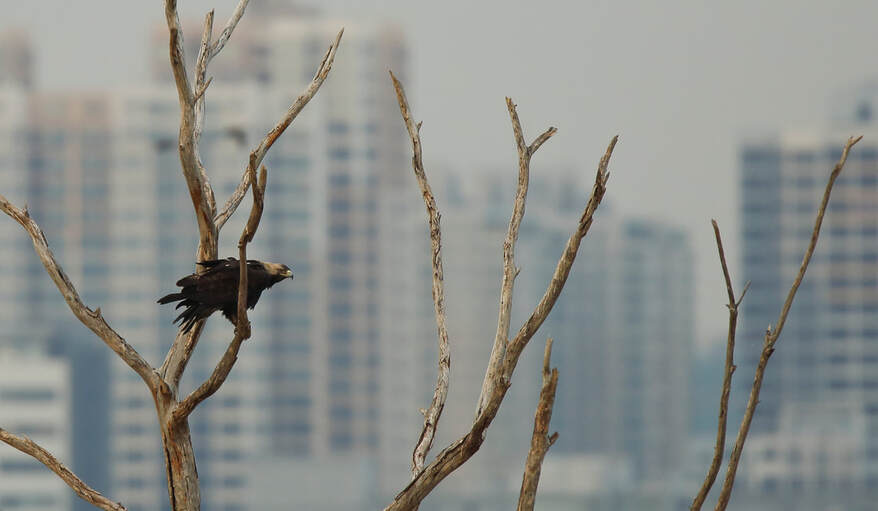 Eastern Imperial Eagle at Mai Po in December (Birding Hong Kong archive)
The northeast monsoon prevailed for the first half of the week, bringing large temperature differences between day and night: at Ta Kwu Ling in the northern New Territories, the morning temperature on 11th was 8⁰C but this rose to 25⁰C in the afternoon. Winds blew more from the east from 12th onwards, bringing milder and more humid conditions to the territory.

Of particular  note for birders in southern China was the sighting of  nine Siberian Cranes at Jiangmen, Guangdong on 10th. Jiangmen lies 120 km west-northwest of Hong Kong. This is the first record of this species for Guangdong Province although there have been two occurrences in Hong Kong.

In Hong Kong, the Japanese Night Heron remained at Pak Tam Chung throughout. A Collared Owlet was heard above the lower section of the red walk in Tai Po Kau on 11th and 14th. A Barred Cuckoo Dove was reported from Sai Kung West CP on 11th. Single Sulphur-breasted Warblers were at Sai Kung and Shing Mun on 12th

There were more reports of Rufous-faced Warblers: three at Sai Kung West CP and one at Lung Fu Shan on 11th, seven at Sai Kung and three at Shing Mun on 12th, and one at Tai Po Kau on 13th with four there on 15th. This brings the total number of birds since 10 November  to at least 27 individuals from ten different sites, with reports of multiple sightings (3+ birds at a single site) since 8 December. Such an irruption is unprecedented; there were eleven previous records from 1964 to spring 2019, with no more than three birds in any one year, although records in both the 2017/18 and 2018/19 winters (the first since 2009) were perhaps a harbinger of what was to come .

As usual, Tai Lam CP was well-watched during the week and turned up a number of interesting sightings including  a female Chestnut-bellied Rock Thrush on 9th & 10th, up to three male Japanese Robins throughout, a female Small Niltava on 10th,  a male Thick-billed Green Pigeon on 11th,  a Hume’s Leaf Warbler on 11th & 12th (present since 27 November) and  26 Tristram’s Buntings on 11th.

Other sightings of  note by date as follows:

14th: a Forest Wagtail in Tai Po Kau; a female Falcated Duck and  three Eastern Imperial Eagles at Mai Po; a Ferruginous Duck, an Eastern Imperial Eagle, a Greater Spotted Eagle, a Northern Lapwing, a Grey-headed Lapwing, a Whiskered Tern, a Eurasian Wryneck and a Buff-bellied Pipit at San Tin; a Sakhalin Leaf Warbler and seven Tristram’s Buntings at Robin’s Nest. This is the latest sighting of Sakhalin Leaf Warbler in Hong Kong so far, the previous late date being 26 November.

UPDATE: There is speculation that the Hume's Leaf Warbler at Tai Lam CP from 27 November is, in fact, a Chinese Leaf Warbler. If accepted as the latter species, this will be the fourth Hong Kong record.

December  16-22
Record shots (much-cropped) of presumed Hartert's Leaf Warbler Phylloscopus goodsoni fokiensis at Lau Shui Heung, 21 December 2019
Cloudy and humid with easterly winds for most of the week. Temperatures were mainly in the low twenties although a replenishment of the northeast monsoon on 20th caused the mercury to fall to 16⁰C  in the New Territories in the mornings. 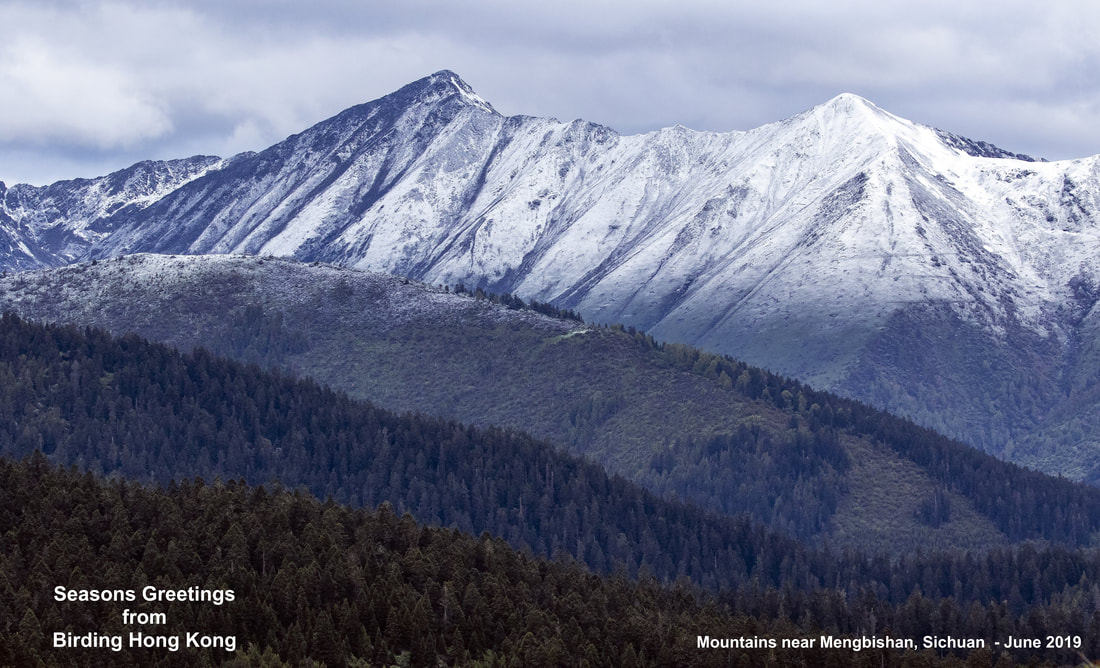 December  23-31
Fine and dry up to 28th with temperatures up to 25⁰. A surge of the northeast monsoon from 29th brought slightly cooler temperatures, cloud, mist and rain – a grey welcome to the new decade.

The emphasis at the end of the year was on woodland birds with a number of scarce Phylloscopus warblers being recorded as well as a Pale-footed Bush Warbler (11th or 12th record if accepted). The best bird, however, was probably a female Slaty-backed Flycatcher found at Tai Lam CP on 28th and still present on 31st. This will be the 4th or 5th record if accepted.