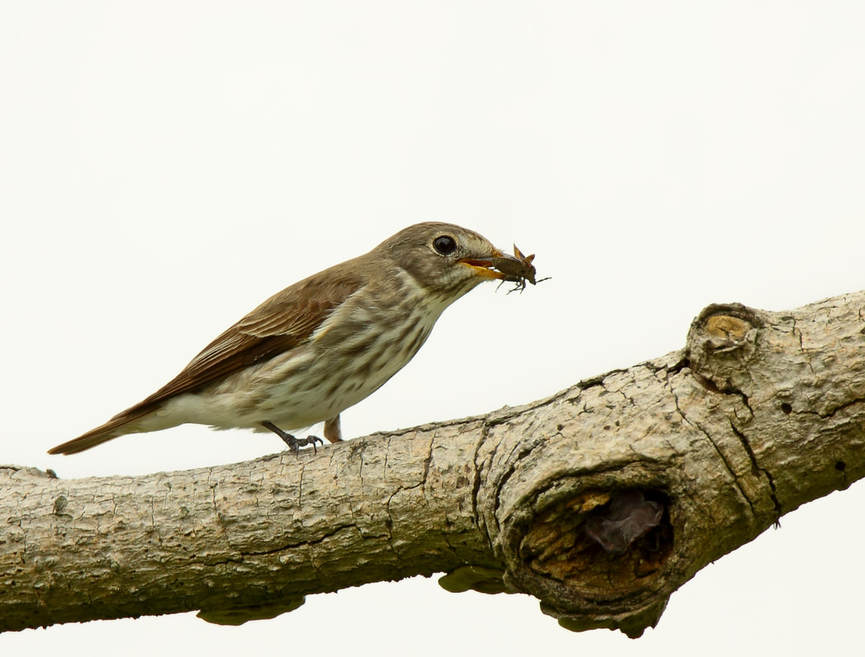 Grey-streaked Flycatcher at Mai Po in spring (archive photograph)
The month began with anticyclonic conditions; winds were southerly with temperatures up to a hot 33⁰C on 2nd. The winds turned to fresh easterlies on 3rd bringing slightly cooler conditions to the territory. A trickle  of typical late-spring migrants and arriving summer visitors were recorded at widespread locations as follows:
Cinnamon Bittern: three in farmland below Shek Kong catchment on 1st; one at HK Wetland Park on 6th
Chinese Sparrowhawk: one at Cheung Chau on 4th
Slaty-legged Crake: one calling at Uk Tau on 4th
Spoon-billed Sandpiper: one at Mai Po on 5th
Grey Nightjar: one calling at Wonderland Villas on 5th
Hodgson’s Hawk Cuckoo: heard at Tai Po Kau on 1st, 2nd & 4th
Lesser Cuckoo: heard at Ng Tung Chai on 1st and Tai Po Kau on 4th
Oriental Dollarbird: one at Shek Kong catchment on 4th
Blue-tailed Bee-eater: six at Po Toi on 3rd
Brown Shrike: singles at Kowloon Park on 2nd, HK University on 4th, HK Wetland Park on 6th
Arctic Warbler: two at Shek Kong catchment and one at Tai Po Kau on 4th, one at HK Wetland Park on 6th
Styan’s Grasshopper Warbler: one Mai Po on 5th
Grey-streaked Flycatcher: two at Po Toi on 3rd, three at Shek Kong catchment and two at HK University on 4th
Brown-breasted Flycatcher: one at Tai Po Kau on 2nd
Eastern Yellow Wagtail: 60 of the nominate race tschutschensis  at San Tin on 4th. 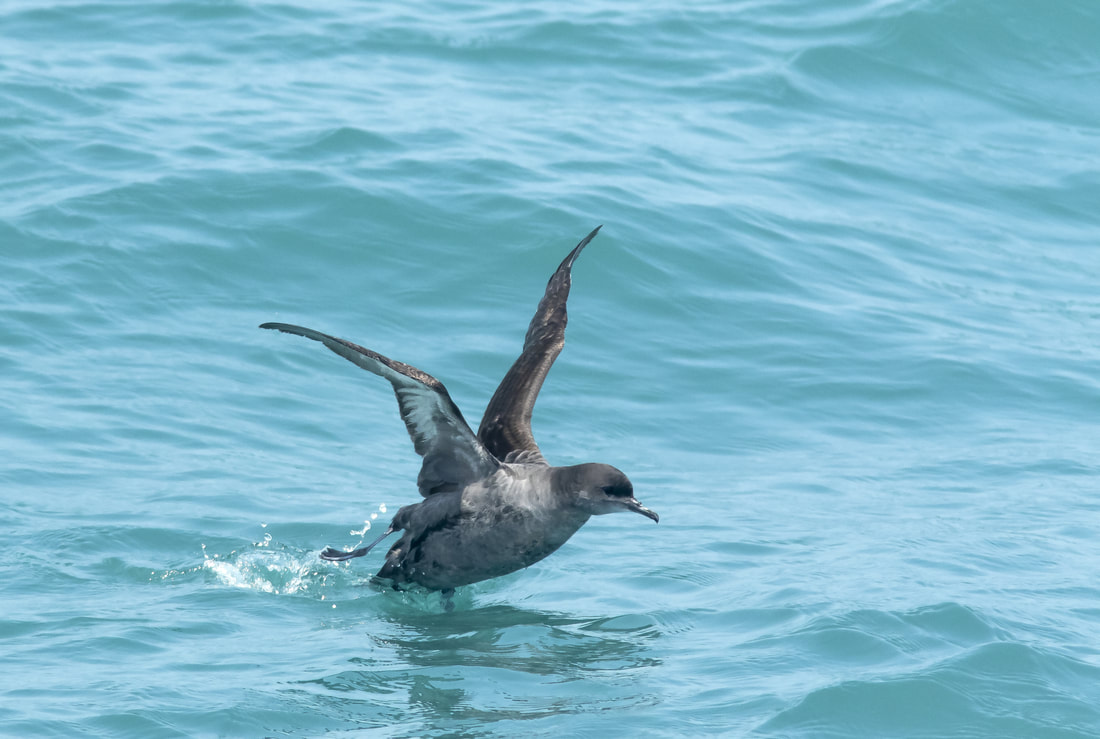 Short-tailed Shearwater in southern waters of Hong Kong, 12 May 2018
A trough of low pressure on 8th brought unsettled weather to the South China coast with showers and thunderstorms; temperatures were in the mid-twenties. It became hot and sunny on 12th & 13th with temperatures reaching 32⁰C.

Po Toi had six Oriental Dollarbirds and a  Black-naped Oriole on 8th, and 40 Bridled Terns were seen from the ferry. A number of interesting migrants were on the island on 10th, including Malayan Night Heron, Striated Heron, three Chinese Sparrowhawks, Black-capped Kingfisher, an Oriental Dollarbird, 52 Brown Shrikes and  two Grey-streaked Flycatchers. A  Short-tailed Shearwater was seen over the sea. On 11th, 68 Brown Shrikes were counted, although their numbers had dwindled to 25 on 12th when three Arctic Warblers and two Grey-streaked Flycatchers were also seen.

Other terns reported during the week included 600 White-winged Terns off  Cheung Chau on 11th and 80 Black-naped Terns between Wong Shek and Tap  Mun on 12th. 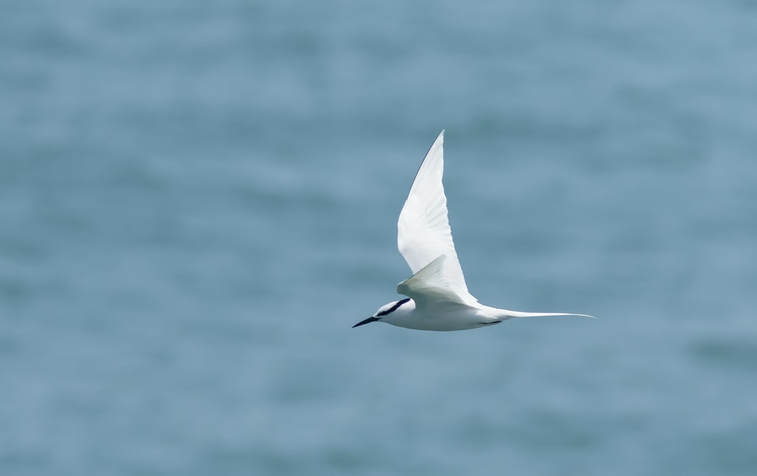 Black-naped Tern at Po Toi rock. 12 May 2018
May 14-20
Anticyclonic conditions. Fine and Hot. Southerly winds with temperatures up to 33⁰C, reaching 36⁰C at Tai Po on 19th. Bird-wise, a very quiet period after a decidedly underwhelming spring.

Lesser Cuckoos were singing at Plover Cove on 14th, Tai Po Kau and Ma On Shan on 17th, and Tai Lam CP on 18th. A Chinese Barbet was also heard at Tai Po Kau on 17th  and 19th, with a Brown-breasted Flycatcher seen there on the latter date. A Hodgson’s Hawk Cuckoo was singing at Pak Sha O on 20th.

A breeding-tern survey in Mirs Bay on 20th turned up 413 Bridled Terns and 153 Black-naped Terns.
May 21-31
Very hot and very dry with daily temperatures up to 34⁰C, reaching a high of 37⁰C at a couple of places in the New Territories. The hottest and driest May on record.

Up to 19 Black-faced Spoonbills remained at Mai Po until at least 27th. A male Greater Painted-snipe with two very young chicks was on pond 8a on 23rd, which means at least two pairs of Greater Painted Snipes have successfully bred on the reserve so far this spring. Out on the mud flats on 23rd were a Nordmann’s Greenshank and a Little Tern, along with a few Caspian, Gull-billed, Whiskered and White-winged Terns. A Lesser Whistling Duck was seen in flight over the northern end of the marshes on 25th; although it appeared to land, it could not be relocated. On 26th a Black-winged Kite and two Nordmann’s Greenshanks were present, and there were also five Oriental Pratincoles on the scrape. The number of pratincoles had swollen to nine on 27th, including one juvenile, suggesting that some of these birds may have bred not too far to the north. Seven birds were still present on 31st.

The Wetland Park held a late Tufted Duck and a late Great Cormorant to the end of the month.

A Chinese Barbet was heard singing from high in the forest at Tai Po Kau from 23rd to the end of the month. A Hodgson’s Hawk Cuckoo was also heard lower down in the forest on 26th.

Eight Black-throated Tits were at Shing Mun on 22nd and 23rd, and 11 Hainan Blue Flycatchers were counted there on the latter date.

Two Lesser Cuckoos were singing on Tai Mo Shan on 27th, with one there on 30th. One was also heard at Plover Cove on 28th.