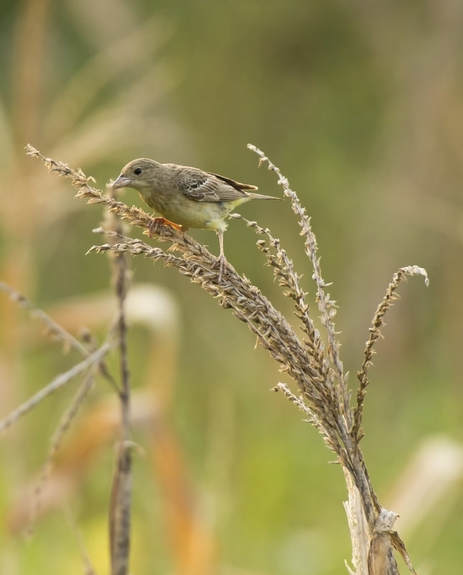 Black-headed Bunting at Long Valley (archive photograph)
LATEST SIGHTINGS - October 2017
October 1-8
October began with generally fine weather. The temperature on 3rd was up close to 35⁰C in the New Territories, which proved to be the hottest October day on record since 1890! The northeast monsoon during the latter part of the week brought a little rain and slightly cooler temperatures in the early morning and evening, but the days remained unpleasantly hot.

On 1st, a Crested Honey Buzzard was seen at Pui O. A Black-backed Swamphen was reported from Long Valley but its tameness indicated it was an ex-cage bird, a fact that was substantiated in the afternoon when it was discovered that its wings were clipped.

On 2nd, two Grey Nightjars were seen at Tai Lam Country Park and a Yellow-rumped Flycatcher was at Ho Man Tin.

Birds at Shek Kong catchwater on 3rd included  Chinese Goshawk,  Ashy Drongo,  Black-winged Cuckooshrike,  Asian Brown Flycatcher, a Yellow-browed Warbler, three Arctic Warblers and two Pale-legged/ Sakhalin Leaf Warblers. Ho Man Tin turned up a Lanceolated Warbler.  The Grey Nightjars were again seen at Tai Lam and a Brown Wood Owl was heard in the evening darkness. This owl was first recorded in Hong Kong in 2006; its main strongholds are Tai Po Kau and Lam Tsuen but it appears to be slowly spreading to suitable woodland habitat away from its core areas.

Birds of interest on 4th were Verditer Flycatcher and Plain Flowerpecker at Pak Sha O,  Eurasian Hobby and Oriental Dollarbird at Lam Tsuen, and a Himalayan Swiftlet and a Pheasant-tailed Jacana at the Wetland Park.

On 8th, a Sulphur-breasted Warbler, a Two-barred Warbler and two Asian Brown Flycatchers were found at Tai O.  A Two-barred Warbler was also at Wonderland Villas near Tsuen Wan. Among the waders at Mai Po were Nordmann’s Greenshank, Long-billed Dowitcher and Asian Dowitcher.  A Pacific Reef Heron and  White-bellied Sea Eagle were seen at Pak Nai, and the over-summering Caspian (mongolicus) Gull and Black-headed Gull were at Tsim Bei Tsui. The first Eurasian Skylark of the autumn was at Long Valley.
October 9-15
It was hot for most of the period under review (34⁰C from 11th-13th). However on 14th, a combination of the northeast monsoon and Tropical Storm Khanun passing to the south of Hong Kong brought a change; it turned cloudy and the temperature fell to a relatively cool 24⁰C. On 15th, Khanun came closer to the territory than initially forecast, bringing strong winds and rain with its passing. Storm Signal number 8 was in effect for most of the day.

At Mai Po two Pheasant-tailed Jacanas were present on 8th and a juvenile Mandarin Duck was on the flooded scrape from 7th to at least 10th. On 9th, a Swinhoe’s Egret, two Asian Dowitchers and a Long-billed Dowitcher were seen from the boardwalk on the rising tide.

At least one of the Japanese Paradise-flycatchers was still at Ho Man Tin on 12th. Two Golden-headed Cisticolas were at She Shan, Lam Tsuen. A Siberian Blue Robin and an Orange-headed Thrush were in Tai Po Kau.

On 13th, the Wetland Park had three Blue-tailed Bee-eaters and four Asian Brown Flycatchers and there was a small influx of Dusky Warblers. A Tiger Shrike was seen on Lantau Peak: this brings the total number seen this autumn to six or seven, which is an exceptional count for this species. Three Orange-headed Thrushes, a Brown-chested Jungle Flycatcher and an Eastern Crowned Warbler were seen at Tai Po Ko by Yat-tung Yu.

An Himalayan Swiftlet was at Pak Sha O on 14th. Five Blue-tailed Bee-eaters, a Black-winged Kite and five Black-faced Spoonbills were reported from Mai Po. A Pheasant-tailed Jacana was at Ting Kok near Tai Po. A Yellow-breasted Bunting was at Long Valley.

A four-and-a- half hour sea watch from Cape D’Aguilar during the passage of Typhoon Khanun turned up an impressive  total of 47 Streaked Shearwaters.
October 16-22 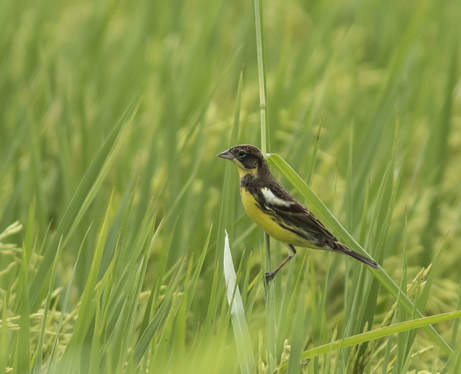 Yellow-breasted Bunting, Long Valley, October 19 2017
After the passage of Typhoon Khanun, Hong Kong once again came under the influence of the northeast monsoon. The temperature was a hot 30⁰C on 17th & 18th, but only reached the high twenties later in the week. Mornings and evenings had an autumnal feel to them, and this sense of autumn was mirrored in the wider variety of birds observed  in the territory.

Mai Po had 11 Black-faced Spoonbills,  a juvenile Pied Harrier, an Oriental Pratincole, a Red-necked Phalarope and ten+ Whiskered Terns on 17th. In addition at least 200 Pale Martins were feeding over the re-flooded scrape. A Middendorff’s Grasshopper Warbler  was trapped on 20th; other birds on  the reserve on the same day were two Eurasian Bitterns, Asian Dowitcher, Pheasant-tailed Jacana, Ruff, Black-winged Kite and two house martins sp. The scrape continued to attract aerial feeders  and there were two Himalayan Swiftlets, 500 Pale Martins, two Asian House Martins,  a Common House Martin plus at least ten house martins sp. there on 21st. The two swiftlets were still present on 22nd and there were at least ten house martins feeding in the vicinity of the scrape, with both Asian and Common House Martins present. Other birds of interest were Eurasian Hobby, Pheasant-tailed Jacana, at least ten Oriental Pratincoles, Long-billed Dowitcher and Ruff.

On 19th  Long Valley had a male Chestnut-cheeked Starling, Lanceolated Warbler, a lugens White Wagtail and  eight Yellow-breasted Buntings. A Eurasian Hobby,  Pallas’s Grasshopper Warbler and Two-barred Warbler were at the Wetland Park.

On 20th, a Eurasian Wryneck was at Shek Kong catchwater.

Finally, those observers who looked up at the uncharacteristically (for these days!) blue sky in the late afternoon were rewarded with four Amur Falcons and a Crested Honey Buzzard moving very high over Lam Tsuen, and three Amur Falcons migrating very high over Mai Po.
October 23-31
Fine and sunny with cool mornings and evenings, although the maximum temperature in the New Territories approached an uncomfortable 30⁰C in the middle of the period under review. There was a resurgence of the northeast monsoon at the end of the month. It was a good time for birds and bird watchers. Reports as follows:

Geese and Ducks: The four common surface-feeding species (Eurasian Wigeon, Northern Shoveler, Northern Pintail and Eurasian Teal) were much in evidence out in Deep Bay and on the flooded scrape at Mai Po, and a few Garganey were still present. Other ducks noted at Mai Po were three Chinese Spot-billed Ducks on 24th,  a female Falcated Duck on 29th with two on 31st, and a  Common Pochard on 24th and 29th. The first Tufted Duck of the autumn was at San Tin on 29th and a Falcated Duck was at Lok Ma Chau on 30th. Four Tundra Bean Geese (4th record) and three Greater White-fronted Geese (6th record?) were discovered at Mai Po on 31st.

Spoonbills & Herons: 130 Black-faced Spoonbills were out in Deep Bay on 25th, as was a Eurasian Spoonbill. The latter, or a different individual, was seen on the northern part of the main reserve with small numbers of roosting Black-faced Spoonbills on 28th & 29th. There were regular sightings of one or two Yellow Bitterns at Mai Po and SanTin, and a Cinnamon Bittern was at San Tin on 24th. A  Schrenck’s Bittern found injured at Fortress Hill on 24th was taken to Kadoorie Farm for rehabilitation.
Raptors: There was a notable movement at the beginning of the period under review. A Crested Honey Buzzard was at Cheung Chau on 23rd, and there were three over Mai Po on the same day with two there on 27th. Eastern Buzzards were widespread with  migrating birds including seven flying high together moving southwest over San Tin on 24th and five doing the same over Mai Po on 25th. Amur Falcons were reported from six different sites on 23rd with at least 28 passing over Mai Po during the day. Passage continued on 24th when at least 30 were seen over Long Valley; six flew over San Tin on 25th and one was at Tai Po Kau on 26th. One or two Greater Spotted Eagles were regularly noted in the Mai Po/San Tin area and the first Eastern Imperial Eagle was seen at Mai Po on 28th;  one was at the Wetland Park on 30th. At least two Eastern Marsh Harriers were at Mai Po during the period and a Pied Harrier was seen on 29th. Other reports included two Bonelli’s Eagles and two Chinese Sparrowhawks at the Wetland Park on 26th and  a Japanese Sparrowhawk at Lung Kwu Chau on 23rd.