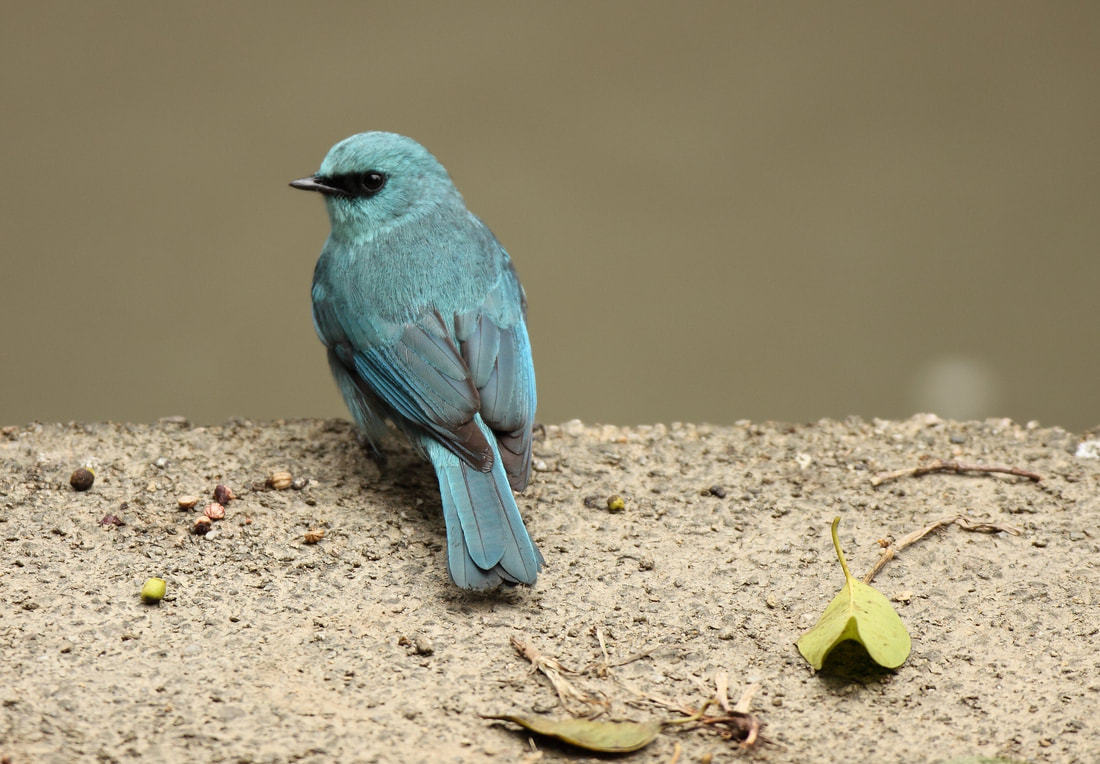 Verditer Flycatcher at Mui Shue Hang (archive photograph)
LATEST SIGHTINGS - December 2017
December 1 - 10
Under the influence of the northeast monsoon, the weather was fine and dry with temperatures in the 18 -24⁰C range until the 7th. A surge of the monsoon from the 7th led to a decrease in temperature, with a range of 9 -18⁰C on the 9th in the New Territories. 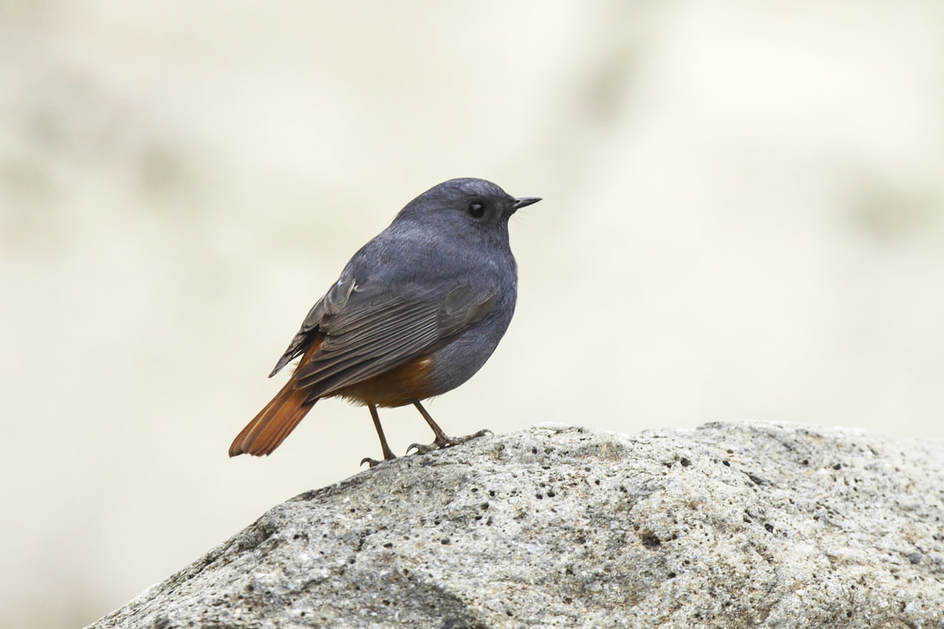 Plumbeous Water Redstart at Chung Mei (archive photograph)
December 11-17
The weather was generally cloudy and mild with temperatures in the low twenties. A resurgence of the northeast monsoon on 16th led to a low of 10⁰C in the New Territories on the morning of 17th.

The Ultramarine Flycatcher was again seen at Shek Kong catchwater on 11th; also present  there were Speckled Piculet, three Lesser Shortwings, Eyebrowed Thrush and  Eastern Crowned Warbler. A Falcated Duck was at the Wetland Park.

A Chinese Thrush found at Shing Mun on 12th and present again on the following day will be the 5th record for Hong Kong if accepted. Also on 5th a Black-backed Swamphen was seen at Hok Tau and Ho Man Tin held Bull-headed Shrike, Two-barred Warbler and Orange-headed Thrush.

On 15th, the somewhat elusive Crested Kingfisher was found near Chung Mei by Matt Kwan and was in the same area on 16th, allowing  a number of “younger” Hong Kong birders to finally catch up with this species.

On 16th, a Dusky Thrush was seen at Pui O. This was probably the same bird as was seen on a HKBWS outing to the area on December 10th. The Black Redstart was at Long Valley, as was a Northern Lapwing.

On 17th, three Plumbeous Water Redstarts were seen at Tai Wo, a Northern Lapwing was at San Tin and one of the adult Pallas’s Gulls was out on the mud flats at Mai Po. The lugens White Wagtail was at Pak Nai and a count of  54  Whimbrels was made at Sha Kiu near Tsim Bei Tsui – this is a high number for this species in winter. Best bird of the day, however,  was a Rufous-faced Warbler discovered at Bride’s Pool by Kwan Tai-mun.  This will be the 7th Hong Kong record if accepted, and the first since 2009.
December 18-24
Early morning temperatures remained around 10⁰C until 22nd, although the sun shone during the day and temperatures rose to 17⁰C or higher. The 23rd was warmer, humid and polluted and the temperature on a sunny Christmas Eve ranged between 17⁰C and 24⁰C.

The Rufous-faced Warbler remained at Bride’s Pool at least until 24th with a supporting cast in the bird wave that regularly included Chestnut-flanked White-eye, Verditer Flycatcher, Mugimaki Flycatcher and Goodson’s Leaf Warbler, as well as an Eastern Crowned Warbler on 23rd. Three Plumbeous Redstarts were also counted in the Bride’s Pool/ Chung Mei area on 19th and the Crested Kingfisher was seen on 18th & 19th.

A male Small Niltava was at Lung Fu Shan from 18th -24th, and the Chestnut-crowned Warbler turned up again on 22nd & 23rd.
The White-spectacled Warbler was seen again on Cheung Chau on 19th & 20th. A Eurasian Hoopoe was also on the island on 20th.

The Oriental Stork remained at Lok Ma Chau at least until 20th and the eastern-race Rook was still present at Lut Chau on the same day.

The Wetland Park held good numbers of Black-faced Spoonbills during the period, with a high count of 134 on 22nd. Other sightings there included a Chinese Spot-billed Duck on 21st and a female Eurasian Sparrowhawk and a Eurasian Woodcock on 22nd.

Other birds of note included a redheaded Smew at Mai Po on 21st and a Pallas’s Gull out on the mud flats on 23rd. A Slaty-backed Forktail was at Shing Mun on 23rd. A Barred Cuckoo Dove found near Shui Tsan Tin on 24th will be the ninth record of this species in Hong Kong if accepted.

And finally, seasons greetings to all those who contribute to the birding scene here in Hong Kong and, of course, to those who visit this website! I wish you all a Happy Christmas and fruitful birding in the year to come. 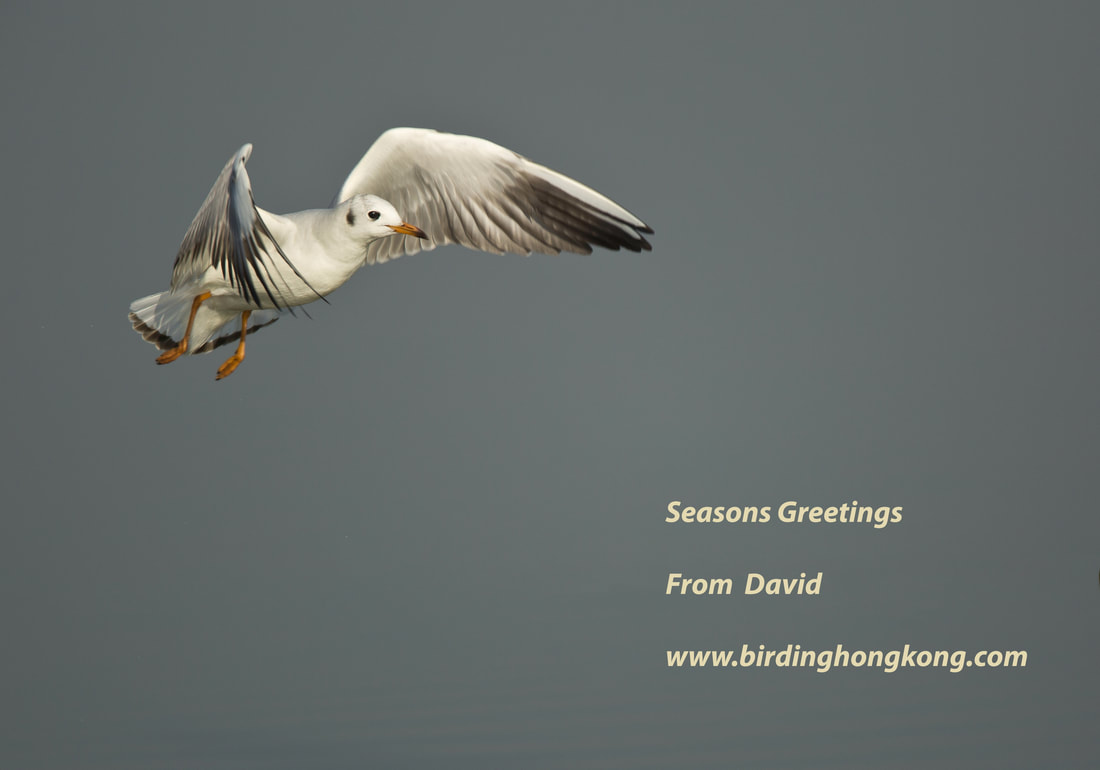 December 25-31
The year ended with generally fine and dry weather with temperatures up to 24⁰C on 29th and 30th.

Long-staying birds that remained during the period under review included the Rook at Lut Chau, the Black Redstart at Long Valley and the White-spectacled Warbler at Tai Po Kau. The Small Niltava and the Chestnut-crowned Warbler continued to be reported from Lung Fu Shan.

Sightings of note from Mai Po were the Smew on 25th, the Baikal Bush Warbler singing again in the same inaccessible reed bed on 29th and a Chiffchaff trapped and ringed by the HKBWS ringing group on 30th.

Ng Tung Chai turned up a male Japanese Robin on 26th as well as a Eurasian Woodcock and a White’s Thrush, and on 30th two Rufous-gorgeted Flycatchers were found there by the same observer.

A pair of Grey Bush Chats were at Wo Hop Shek on 29th. The Slaty-backed Forktail was seen again at Shing Mun on 30th.