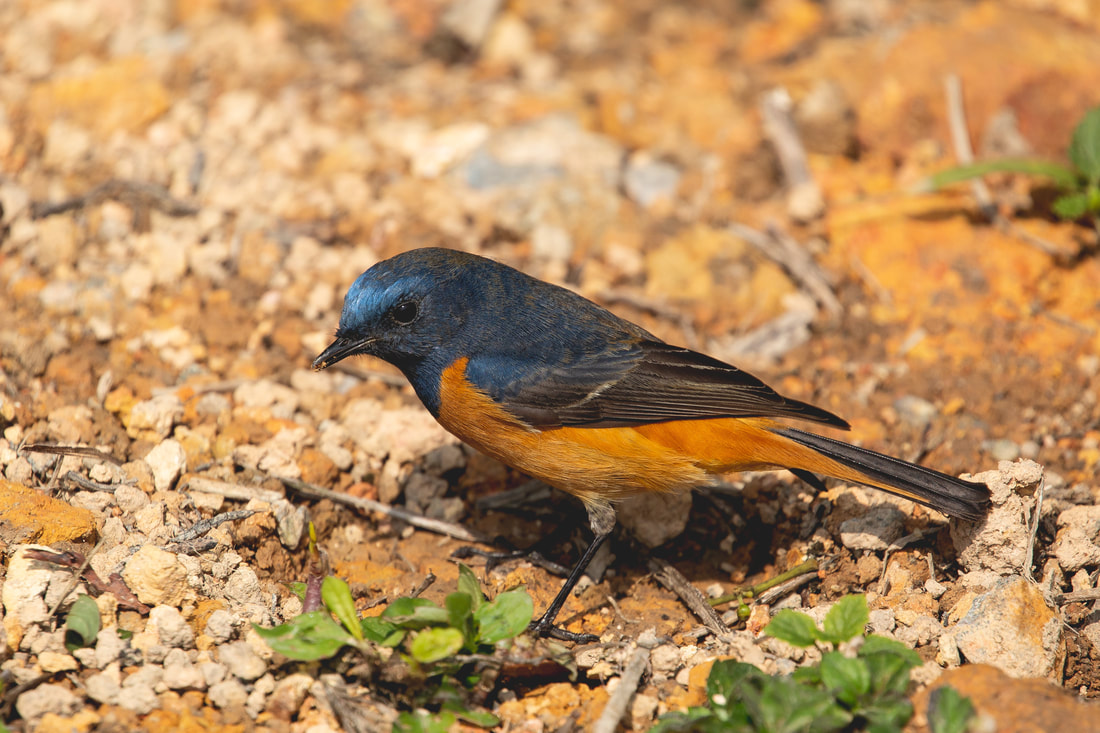 1st-winter male Blue-fronted Redstart at Ngong Ping, Lantau, 6 February 2020
Temperatures ranged from 13 - 21⁰C, falling and rising with the ebb and flow of the winter monsoon; mainly grey and cloudy with rain patches; winds easterly to north-easterly.

Bird of the period was a 1st-winter male Blue-fronted Redstart at Ngong Ping. This bird had first been seen on 1 January but, for some reason, its presence was not made known until 5 February, after which it was well-watched from 6th – 9th. There is one previous record of this species in Hong Kong – at Pok Fu Lam CP on 25 May 1997. This bird was judged to be ex-captive and was placed in Category E (current Category III). The Ngong Ping bird was therefore a potential first for Hong Kong. However, although very attractive and very interesting to watch, missing feathers on the left wing suggest that this individual will also be judged as an escaped/released bird. 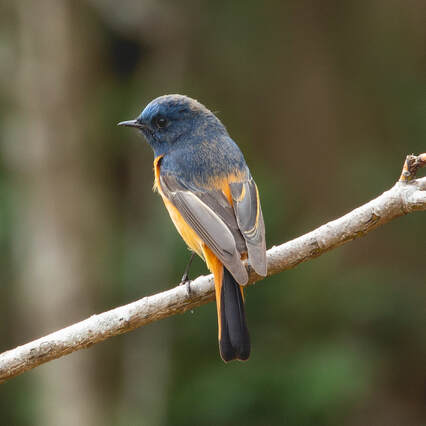 1st-winter male Blue-fronted Redstart at Ngong Ping, Lantau, 6 February 2020
One more highly feasible candidate for a Hong Kong first is Kloss’s Leaf Warbler and at least three birds were discovered in early February. One was identified at Pak Sha O on 1st and seen again on 2nd. Another was present at Lau Shui Heung from 3rd to 9th and it is possible that more than one bird was present at this  site. A third bird was reported from Tai Po Kau on 9th. 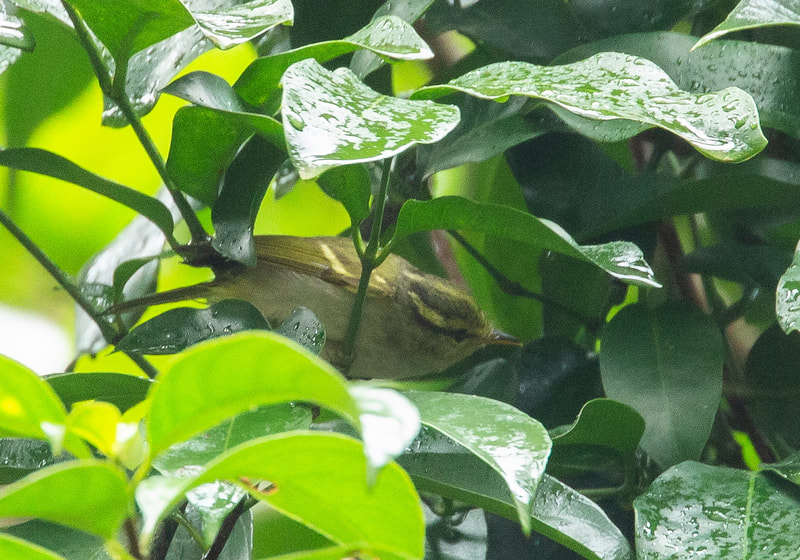 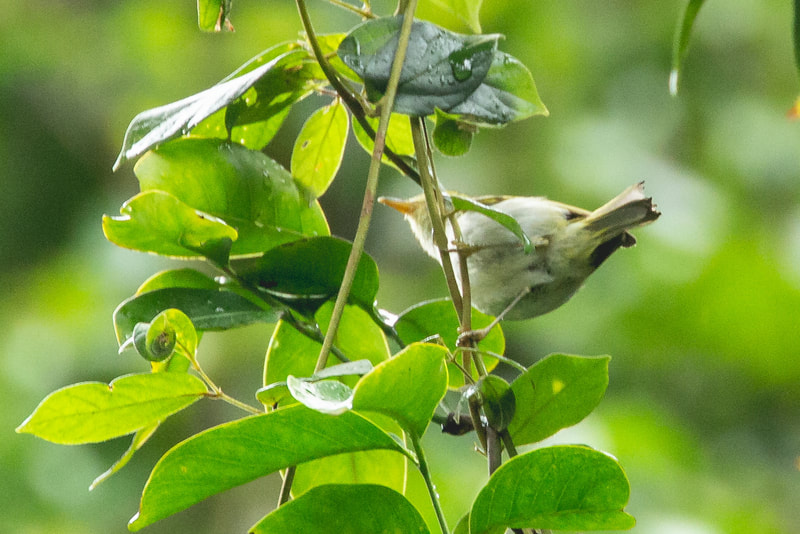 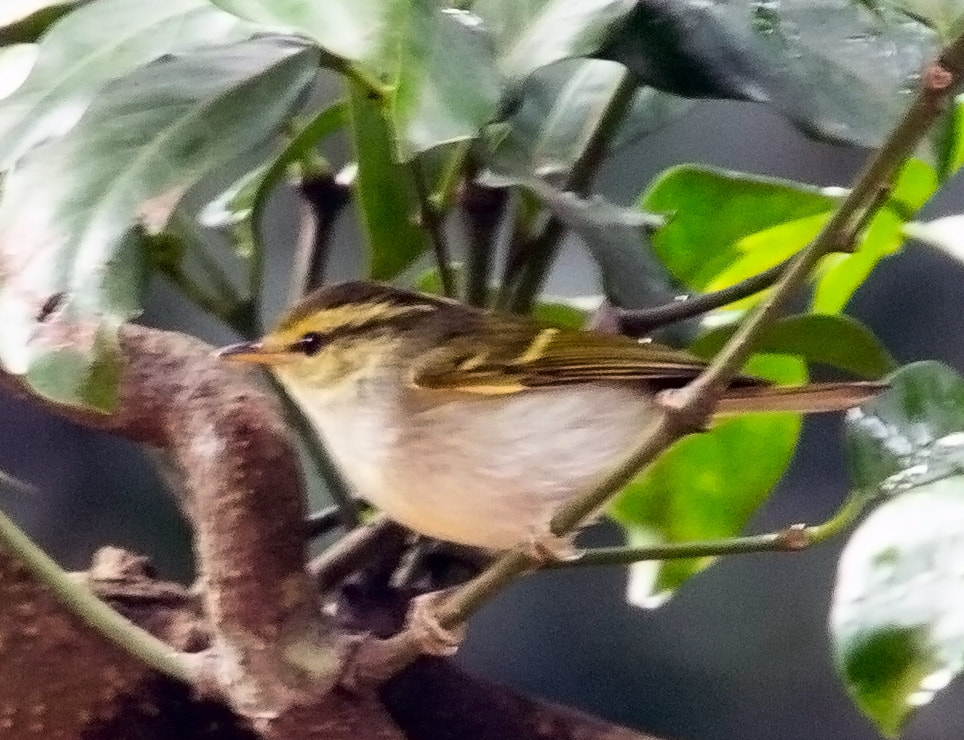 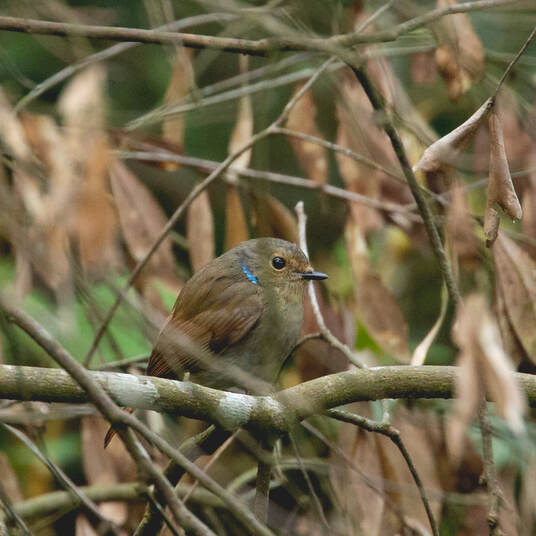 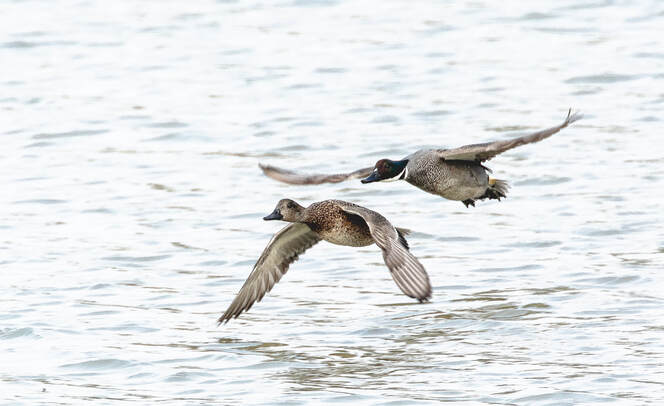 Falcated Ducks at Mai Po, 12 February 2020
Changeable weather. Cloudy on 10th & 11th becoming sunny on the afternoon of 12th when the temperature at Mai Po rose to a very warm 24⁰C. Winds changed from east to southeast from 13th - 15th; the maritime airstream brought heavy rain and thunderstorms to the territory and an amber rainstorm warning was issued on 13th. A cold front associated with a resurgence of the northeast monsoon affected the territory overnight on 15th, causing the early morning temperature on 16th to fall to 12⁰C.

The Kloss’s Leaf Warbler and the male Fujian Niltava remained at Lau Shui Heung at least until 16th. Other birds recorded at this site included Eurasian Woodcock on 10th, an Eastern Crowned Warbler and three Rufous-faced Warblers on 12th, and a Pale-legged Leaf Warbler on 16th.

The tides at Mai Po were workable during the period; sightings from the boardwalk included a Gadwall, an adult Vega Gull (vegae), a 1st-winter Mew (Kamchatka) Gull, and a subadult Pallas’s Gull on 10th. The Vega Gull and Pallas’s Gull were still present on 12th when a female Greater Scaup was also noted and a Curlew Sandpiper, a Broad-billed Sandpiper and a Far Eastern Curlew were seen among the regular wintering shorebirds on the mudflats. On the main reserve on 12th, two Chinese Spot-billed Ducks, a pair of Falcated Ducks and a Buff-bellied Pipit were recorded. A good high tide on the 15th turned up the female Greater Scaup, a hybrid male American x Eurasian Wigeon, four Pallas’s Gulls, two nominate Vega Gulls, the 1st-winter Mew (Kamchatka) Gull, an adult Black-tailed Gull and a 1st-winter Slaty-backed Gull.

Other odds and sods were: a Pale Thrush and a White’s Thrush at Tai Tong, and a Verditer Flycatcher at Wonderland Villas on 10th; an Eastern Water Rail at Mui Wo,  two White-spectacled Warblers, a Rufous-faced Warbler, a male Hill Blue Flycatcher and five Mrs Gould’s Sunbirds at Tai Po Kau, and a White’s Thrush at Tai Tong on 11th; the Blue-fronted Redstart at Ngong Ping and a Black-throated Tit at Tai Po Kau on 12th; a Rufous-faced Warbler at Shan Liu near Tai Mei Tuk and an Eyebrowed Thrush in Yuen Long Park on 14th; two Bonelli's Eagles and a Eurasian Woodock at Pui O on 15th; seven Falcated Ducks and the wintering  Pheasant-tailed Jacana at Lok Ma Chau, a Verditer Flycatcher at Kowloon Hills catchwater,  a Chestnut-crowned Warbler at Tai Po Kau, and single  Bonelli’s Eagles at Pui O, Tai Tong and Mong Tseng on 16th. 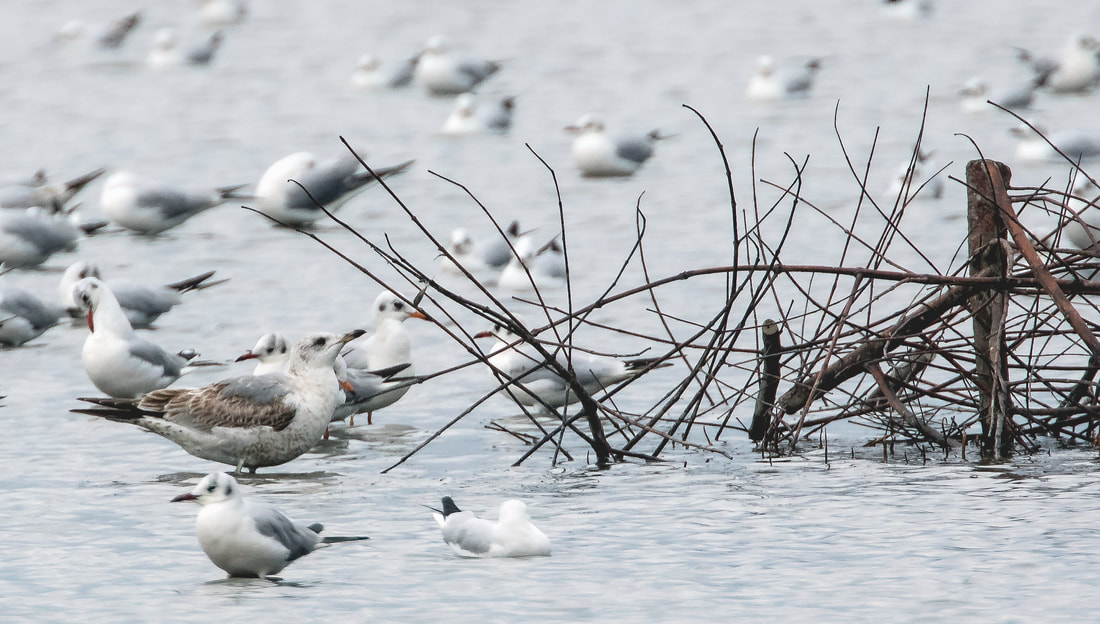 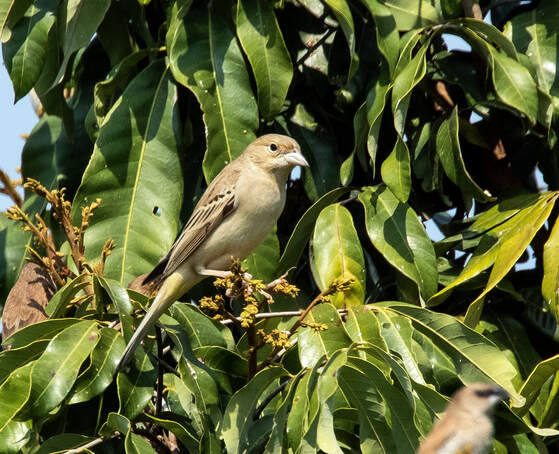 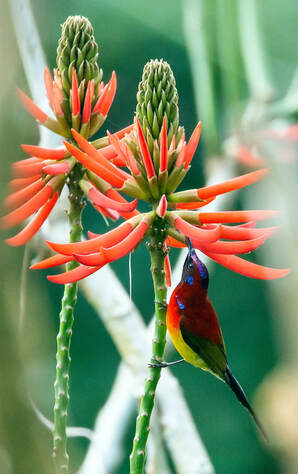 Mrs Gould's Sunbird at Tai Po Kau, 18 February 2020
February 17th saw Hong Kong under the influence of an intense northeast monsoon, with temperatures  falling to below 8⁰C in the northern New Territories. It was mainly fine and dry during the week with cool mornings and warm, sunny afternoons; temperatures rose day by day with the northwest New Territories experiencing  a high of 27⁰C on 22nd & 23rd.

Highlight of the week was a Grey-crowned Warbler photographed at Shui Long Wo campsite near Ma On Shan on 17th. Unfortunately, there were no further sightings.  Other records of rarities involved a Collared Owlet calling at Tai Po Kau, the Chinese Grey Shrike still at Mai Po, more records of Rufous-faced Warblers from at least two sites, a Bianchi’s Warbler at Tai Po Kau, Kloss’s Leaf Warblers still at Lau Shui Heung and Tai Po Kau, the male Hill Blue Flycatcher continuing at Tai Po Kau, up to seven Mrs Gould’s Sunbirds frequenting the Coral Trees Erythina sp. at Tai Po Kau, and a female Red-headed Bunting and an unseasonal Rustic Bunting at Long Valley. 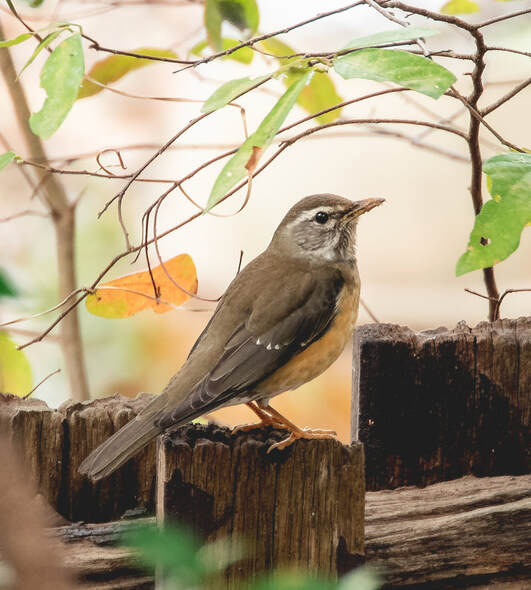 Rarity of the week was a Common Shelduck seen in flight at Mai Po on the early morning of 26th. This duck used to be a common winter visitor to the Deep Bay mudflats with a high count of 4011 on 17 Jan 1988. Four-digit peak counts continued up to 2000 (1,320 in the January waterfowl count) after which there was a steep decline to 68 in 2005. Only three were recorded in 2011, with seven in 2012 and the final record of a single bird in March 2013. This is the first sighting of this species in Hong Kong since then. A paper in the January 2020 issue of British Birds about  the Wash estuary in eastern England notes that there has been a long-term decline in the number of Common Shelducks wintering on the estuary and suggests that one of the reasons for this may be “linked to … improved water quality leading to reductions in benthic invertebrate densities.” Similarly, it seems likely that the dramatic decline in Hong Kong is connected to a change in the food supply in Deep Bay – a result of a concerted cross-border government effort at the start of the new century to improve the water quality in the bay after it had become seriously polluted by sewage and livestock waste during the 1980s and 90s.

Common Shelducks at Mai Po, 2 March 2012 (Birding Hong Kong archive). These seven birds were present from 26 January to 17 March 2012. The only bird in the 2012/13 winter was one in the Mai Po area from 9 to 18 February, and again on 1 & 2 March, after which there were no further records until the recent sighting on 26 February 2020.
Other sightings from Mai Po included the wintering Chinese Grey Shrike and a Eurasian Wryneck on 26th, and four Falcated Ducks, 14 Chinese Spot-billed Ducks and a drake Mallard on 27th.

The wintering Eyebrowed Thrush remained in Yuen Long Park at least until 26th.

On 25th, Tai Po Kau held single White-spectacled, Bianchi’s and Chestnut-crowned Warblers, as well as two Rufous-faced Warblers. Up to at least three Mrs Gould’s Sunbirds were present on the coral trees in the Outdoor Study Centre till the end of the month. A Kloss’s Leaf Warbler was seen on 28th.

The presumed ex-captive Blue-fronted Redstart was still at Ngong Ping on 26th. Also on 26th, a good count of six Chinese Grassbirds and five Blue Rock Thrushes was made at Sunset Peak.

The first Large Hawk Cuckoo of the spring was heard at Yuen Long on 28th. 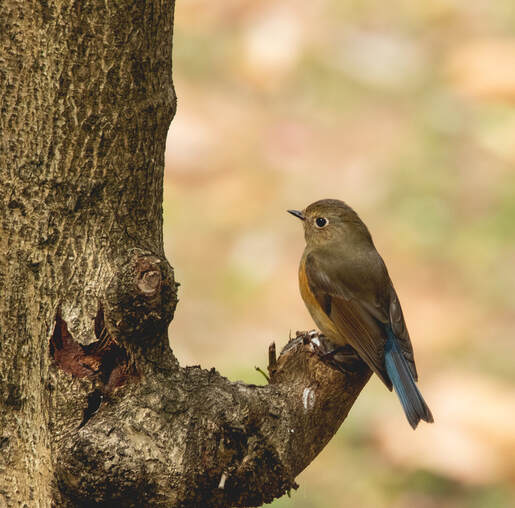 Red-flanked Bluetail at Yuen Long Park, 24 February 2020
************************************************
​Please note that these are unchecked reports. Records of rarities and of unseasonal occurrences may be subject to assessment by the HKBWS Records Committee. A checklist showing species  for which a description is required can be found at the HKBWS website - http://www.hkbws.org.hk/BBS/viewthread.php?tid=28249&extra=page%3D1
All images & text © David Diskin unless otherwise stated
dadiskin@netvigator.com