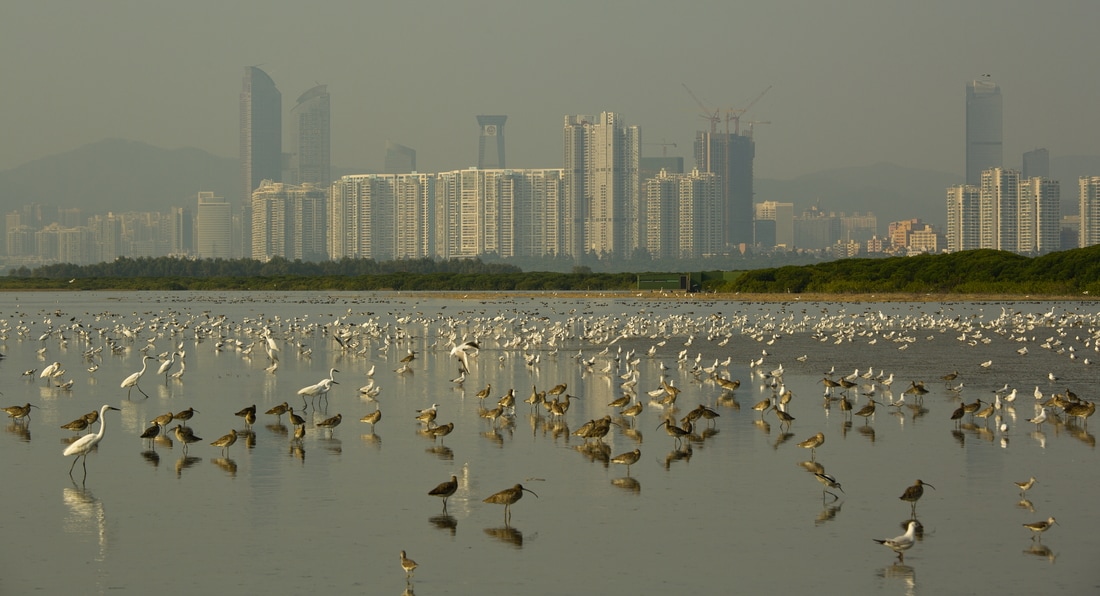 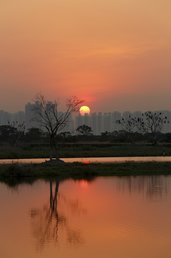 Mai Po is a wetland of international importance that became a designated Ramsar site in 1995. Up to 60,00 birds feed on the mud flats during the winter months comprising roughly 70 different species. Peak counts in recent years have consisted of 10,000 Great Cormorants, 13,000 ducks and grebes, 3,000 herons and egrets, 8,000 gulls and 22,000 shorebirds. In addition, up to 24,000 shorebirds  - many of them from as far away as Australasia – use the mud flats as a place to refuel during spring migration to their northern breeding grounds. Indeed, Mai Po is one of the best places in the world for seeing Palearctic waders in spring.

Thirty-five of the 400 or so bird species that have occurred at Mai Po are on the Red List of threatened species drawn up by the International Union for the Conservation of Nature (IUCN), including regular migrants such as  Swinhoe’s Egret, Falcated Duck, Greater Spotted Eagle, Eastern Imperial Eagle, Nordmann’s Greenshank and Spoon-billed Sandpiper. Most important perhaps is Black-faced Spoonbill. Mai Po is one of the few sites where this endangered species winters regularly and it has in the past held up to 25% of the world population.

As indicated above, spring – especially the first three weeks of April – is perhaps the optimum time for a visit to the reserve. Up to 45 wader species can occur at this time, many of them being in summer plumage. Prime targets for keen birders are the three Asian species: Nordmann’s Greenshank, Asian Dowitcher and Spoon-billed Sandpiper. The first  two are highly likely to be seen; the Spoon-billed sandpiper is, however, far more difficult and sightings cannot be guaranteed. The world  population of this enigmatic species has declined rapidly in recent years so that it is now critically endangered.  Fewer than 400 birds are thought to survive. Now only one or two a year turn up at Mai Po, usually in mid-April.

Late autumn/winter has its own attractions. Black-faced Spoonbills are usually easily seen as 400-500 birds occur. Other key species are Saunders’s Gulls out on the mud flats and Eastern Imperial and Greater Spotted Eagles on the reserve. Unfortunately, Dalmatian Pelicans no longer occur.

Summer is a relatively quiet season. However, if you are visiting Hong Kong at this time and you can put up with the heat and humidity, there are some birds to be seen. A handful of Black-faced Spoonbills have summered in recent years. Black-winged Stilts, Slaty-breasted Rails and Greater Painted-snipe all breed and there are egretries at Mai Po village and on the reserve itself. 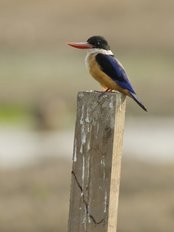 Black-capped Kingfisher
GETTING AROUND
Getting around the reserve is straightforward and is mainly along concrete paths. A map can be found
here.  The key spots to concentrate on are mentioned below:

The Visitor Centre
This is where you have to pick up your permit.  There are small areas of woodland around the centre and these are attractive to birds. A feral flock of Azure-winged Magpies is usually conspicuous in the area; they breed in the wood adjacent to the car park. A pair of Chinese Blackbirds also breeds in the wood, which has some impressive Chinese Banyans. On migration and in winter, various warblers, flycatchers and thrushes might be seen.

Casuarinas and Reedbeds
From the visitor centre, you need to make your way to the AFCD Nature Warden Post at the start of the reserve proper to check in. Most people then walk south along the concrete path lined with Casuarinas. The gei wai (shrimp ponds) on the right hold various herons and ducks. The reed bed on pond 9 is worth a scan. Chinese Penduline Tits can sometimes be seen here, as can Oriental and Black-browed Reed Warblers on passage. It is also a good site for Black-faced and Little Buntings.

The Tower Hide
This three-storey hide overlooks freshwater pond 8a. The islands in the pond sometimes have loafing egrets, ducks and waders. The elevated hide provides good views over the northern end of the reserve and is a good place to scan for raptors.

The Education Centre
The concrete path between gei wai 12 and 13 cuts across the reserve to the boardwalk gate. You may wish to take this path and head out to the mud flats if the tide is right. Otherwise continue to the Education Centre and ponds 15a & b. These ponds were the first that WWF began managing in 1983. For a good many years they held a captive waterfowl collection but this is no longer the case. However, seed is still put out for birds to feed on, especially on 15a. If you scan through a scope, you can sometimes get good views of Oriental Turtle Doves coming down to feed with Spotted Doves. Ponds 15b & c hold hundreds of roosting Great Cormorants during the winter months.

The Scrape
Pond 16/17 was modelled on the Scrape at Minsmere. The prime purpose of this shallow pond with low-lying islands is to act as a roosting area for shorebirds during very high tides when all of the mud is covered in Deep Bay, especially in spring. A number of hides are scattered around the periphery, allowing good views of various sections of the pond. The islands also act as resting areas for a number of raptors in winter and as breeding sites for Black-winged Stilts, Greater Painted-snipe and Slaty-breasted Rails in summer. Rarities often turn up here.

The Southern End
The southern end of the reserve holding ponds 20-24 tends to be rather  neglected by birdwatchers. There is little mangrove in this section and most of the gei wai have been transformed to fresh water ponds with reed beds. Scattered trees can be seen on the bunds. These trees hold resting Great Cormorants and Black Kites in winter and are worth scanning for other perched raptors, particularly for Greater Spotted and Eastern Imperial Eagles. This section is also good for Collared Crow if you can’t find it elsewhere on the reserve. Pond 20 might hold wintering duck, and 1-2 Baer’s Pochard have been sighted here in recent years.

Black-faced Spoonbills & Grey Heron in Deep Bay, April
Deep Bay
This is the most productive part of the reserve but a successful visit here is dependent on the tides. There are three floating hides out in the bay, accessed by boardwalks. These are the northern hide (often called the new hide), the southern hide (often called the  HKBWS or Cathay hide) and the central hide (in fact two hides adjacent to one another). Basically, the northern hide is best  visited on a 1.6 to 1.8 metre tide, the southern hide on a 1.9 to 2.1 metre tide and the central hide on a 2.1 to 2.2 metre tide.  Once the tide is 2.3 metres and above, the mud is covered and most of the water birds disappear. Under 1.5 metres, most of the birds are distant specks on the mud flat.

The gathering of water birds on a rising or falling tide in winter and spring can be very impressive. There are good numbers of ducks, egrets (including Swinhoe’s Egret in April and May), Black-faced Spoonbills, waders, gulls and terns. This is the site to look for the uncommon Saunders’s Gull and is the most likely place to find Spoon-billed Sandpiper in mid-April (best from the northern hide). It is also a place for rarities, especially the less common gulls.

The Northern End
The more open ponds at the northern end of the reserve are good for duck in winter, and scarcer species such as Falcated Duck and Baikal teal might be found here.  Pond 3 is a good site for loafing Black-faced Spoonbills and 1-2 Eurasian Spoonbills often accompany them.

The Access Road
The road leading to the reserve from Castle Peak Road passes through commercial fish ponds and can be good for birds. Common resident species include three species of kingfisher. Marsh terns, hirundines, swifts, pipits and wagtails occur on migration and it is a good area for Red-billed Starlings in winter. 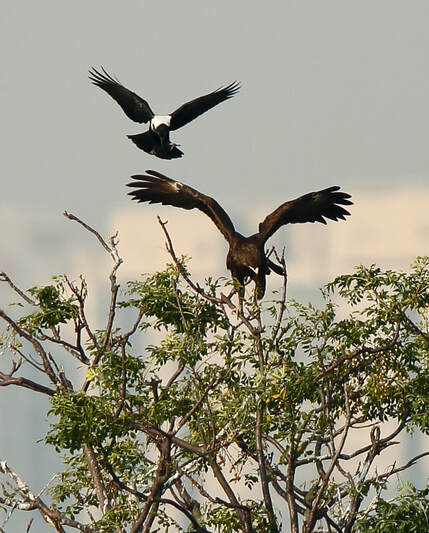 Greater Spotted Eagle being mobbed by Collared Crow
VISITING MAI PO
Access to the reserve is restricted. Local bird watchers can obtain annual permits to enter the reserve and to go out to the mud flats through the Frontier Closed Area. Foreign birders need to apply for a day permit in advance and pick it up from the visitor centre on the day. The permit allows entrance to the reserve between 9.00 and 17.00 hours.  This form called 'Solo Walk for Overseas Naturalists' can be found at  https://www.wwf.org.hk/en/reslib/resources/forms/ .

GETTING THERE
Mai Po is situated in the northwest New Territories along Castle Peak Road between Sheung Shui and Yuen Long. Best is to get the MTR to Sheung Shui on the East Rail line. From there, take a green taxi to the reserve. When you leave the reserve, office staff may be able to call a taxi to pick you up. If not, you will have to walk to Castle Peak Road along the access road (1 kilometre) and pick up a taxi, bus or minibus from there. Further details can be found on the WWF (HK) website.