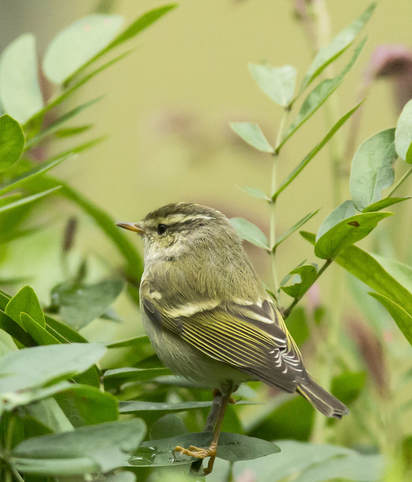 Yellow-browed Warbler, Mui Shue Hang Park, 30-1-2018
LATEST SIGHTINGS - FEBRUARY 2018
February 1-4
The first days of February were cold and grey with temperatures in the New Territories barely rising into double-figures during the day. There was a noticeable, albeit small, increase in the number of thrushes (Grey-backed and Japanese) as well as Red-flanked Bluetails recorded in the territory. Several species intent upon finding sufficient food in the cold weather were unusually tame and approachable; perhaps most conspicuous was the number of  Yellow-browed Warblers forced down to ground-level to feed.

At Mai Po, the Rook was seen on 1st. On 2nd, the wintering Baikal Bush Warbler was singing in the same reed bed as on previous occasions. There was a good variety of water birds present on the reserve on 3rd, including the Greater White-fronted Goose, the Smew, five Chinese Spot-billed Ducks, three Gadwalls, the Oriental Stork and the Northern Lapwing. Out on the mud flats, where several Saunders’s Gulls were already in breeding plumage,  there were two Pallas’s Gulls (a 2nd-Winter and an adult coming into summer plumage), four Falcated Ducks (a male and three females), three Grey-headed Lapwings and a Terek Sandpiper.

Elsewhere, Shek Kong Airfield Road held a Chinese Grosbeak and two Common Rosefinches on 2nd.  On the same day a Fujian Niltava was seen at Pak Tam Chung along with Orange-headed Thrush and Mugimaki Flycatcher.

A Japanese Sparrowhawk and a female Russet Sparrow were at Long Valley on 3rd. A White-spectacled Warbler – presumably the same bird as was reported earlier in the winter – was at Tai Po Kau on 4th.
February 5-11 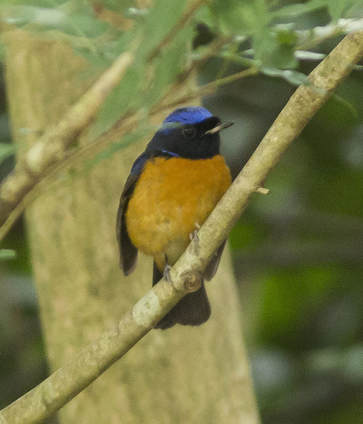 Fujian Niltava, Pak Tam Chung, 7-2-2018 (record shot)
It remained very cold at the beginning of the week, especially in the New Territories. (On the morning of 6th, the windows of my car were etched with frost.) Temperatures gradually increased and reached a balmy 23⁰C on 10th. A replenishment of the northeast monsoon on 11th brought slightly cooler weather to the territory but it was still up to 18⁰C in the afternoon.

On 5th, Orange-headed Thrush, male Fujian Niltava and  three Mugimaki Flycatchers were at Pak Tam Chung. The Fujian Niltava remained until at least 9th. Other birds seen (or heard) at the site during the week included Bay Woodpecker and Eyebrowed Thrush on 7th. Also on 5th, Ma Tso Lung turned up 82 White-shouldered Starlings, which is an unusually high count for winter, three Bluethroats and an Asian House Martin.

Birds at Mai Po on 6th included the Greater White-fronted Goose, the Oriental Stork, three Pallas’s Gulls, Brown-headed Gull and Black-tailed  Gull. Other sightings on the reserve during the week were  the singing  Baikal Bush Warbler on 7th and an Eastern Water Rail on 10th.
Long Valley held Japanese Sparrowhawk and Ruddy-breasted Crake on 6th and Eastern Water Rail on 7th.

Reports on 10th included the Eurasian Hoope and a Common Rosefinch at Airfield Road, Russet Sparrow and Bluethroat at Long Valley, a Dusky Thrush near Kam Tin, and Orange-headed Thrush, Bull-headed Shrike and Radde’s Warbler at Pak Sha O.

On 11th, there were still a number of rarities at Mai Po: the Greater White-fronted Goose, the Oriental Stork, the Black-backed Swamphen and the eastern race Rook were all seen in the afternoon. Ducks included three Gadwall, a Chinese Spot-billed Duck and a male Falcated Duck. Two Verditer Flycatchers and a Rufous-gorgeted Flycatcher were at Lung Fu Shan.
February 12-18
The week was mild and humid with temperatures in the New Territories on the first day of the Year of the Dog (16th) reaching 27⁰C, the second highest such occurrence since records began.

The sense of ‘spring in the air’ was enhanced by Asian Koels in song  at several sites, and the first Large Hawk Cuckoo was reported from Shek Kong catchment on 16th. Eurasian Siskins were also regularly reported from the catchment with a peak count of 25 on 17th.  Also noted there were eight Black Bulbuls and ten Chestnut-collared Yuhinas on 12th.

Reports from Mai Po included the Greater White-fronted Goose, the Oriental Stork, the Northern Lapwing, 40 Chinese Penduline Tits, three Buff-bellied Pipits and  25 Daurian Redstarts on 12th, and the Smew and a Black-winged Kite on 13th. The latter was photographed with a bat as its prey – see http://www.hkbws.org.hk/BBS/redirect.php?tid=27143&goto=lastpost#lastpost .

The two wintering Ferruginous Ducks were still at Lok Ma Chau on 12th.

On 13th, an immature male Mrs Gould’s Sunbird was seen at Shing Mun Valley, two White’s Thrushes, seven Grey-backed Thrushes, an Eyebrowed Thrush and a Pale Thrush were at Tai Tong, and an Eastern Water Rail and a Eurasian Hoopoe were at Fung Lok Wai.

Tai Po Kau turned up the male Siberian Thrush on 14th and the White Spectacled Warbler was again seen there on 15th.

The Slaty-backed Forktail was still on its favoured stream at Shing Mun reservoir on 16th.
February 19-28 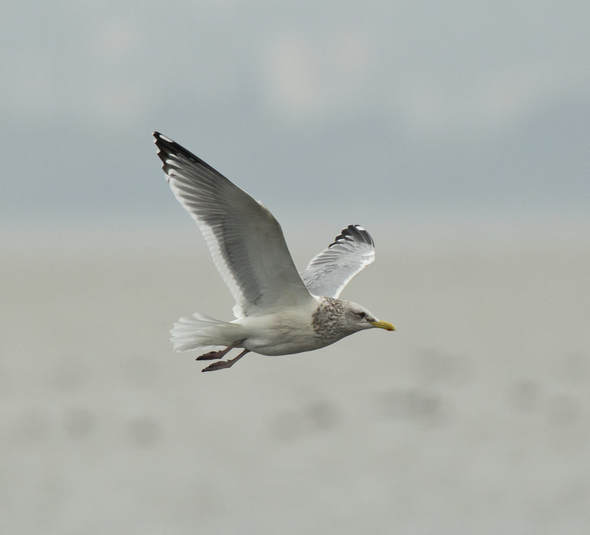 Adult Vega Gull in Deep Bay (archive photograph)
A resurgence of the northeast monsoon caused the temperature to fall to 11⁰C on 23rd, but after that the weather became mild and humid. The last day of the month saw a high of 28⁰ in the New Territories.

The long-staying rarities continued to be seen at Mai Po with the Greater White-fronted Goose, Oriental Stork, Rook and  Black-backed Swamphen all present until at least 24th. Also noted on 20th were the Baikal Bush Warbler, three Falcated Ducks and a Ruddy-breasted Crake. The main focus, however,  was on the gulls out in Deep Bay, the highlight being a gull showing characteristics of Glaucous Gull on 21st and 23rd. If accepted, this would be the eleventh  record of this rare gull, and the first since 2012,  but some are of the opinion that it is in fact a "Glaucous Gull" hybrid and not a “pure” bird. Other gulls of interest seen at the same time were two Black-tailed Gulls and  two Vega Gulls on 21st, and two Black-tailed Gulls, a Vega Gull, two Pallas’s Gulls and a 1st-winter Mew (Kamchatka) Gull on 23rd. Apart from the gulls, a duck with plumage features of male American Wigeon was seen out in Deep Bay on 21st; this bird proved as contentious as the “Glaucous Gull” and may go down as an American x Eurasian Wigeon hybrid, although its plumage – apart from perhaps the too-grey axillaries – is a lot closer to pure American Wigeon than most of the hybrid wigeon that we get out in Deep Bay.

Other of records of note during the period under review were:

20th: Long-billed Dowitcher at the Wetland park and the White-spectacled Warbler still in Tai Po Kau.

24th: A Brown Crake at Lam Tsuen, which is only the sixth record of this rare crake since the publication of the Avifauna. A Bull-headed Shrike was seen at Lam Tsuen by a different observer on the same day.