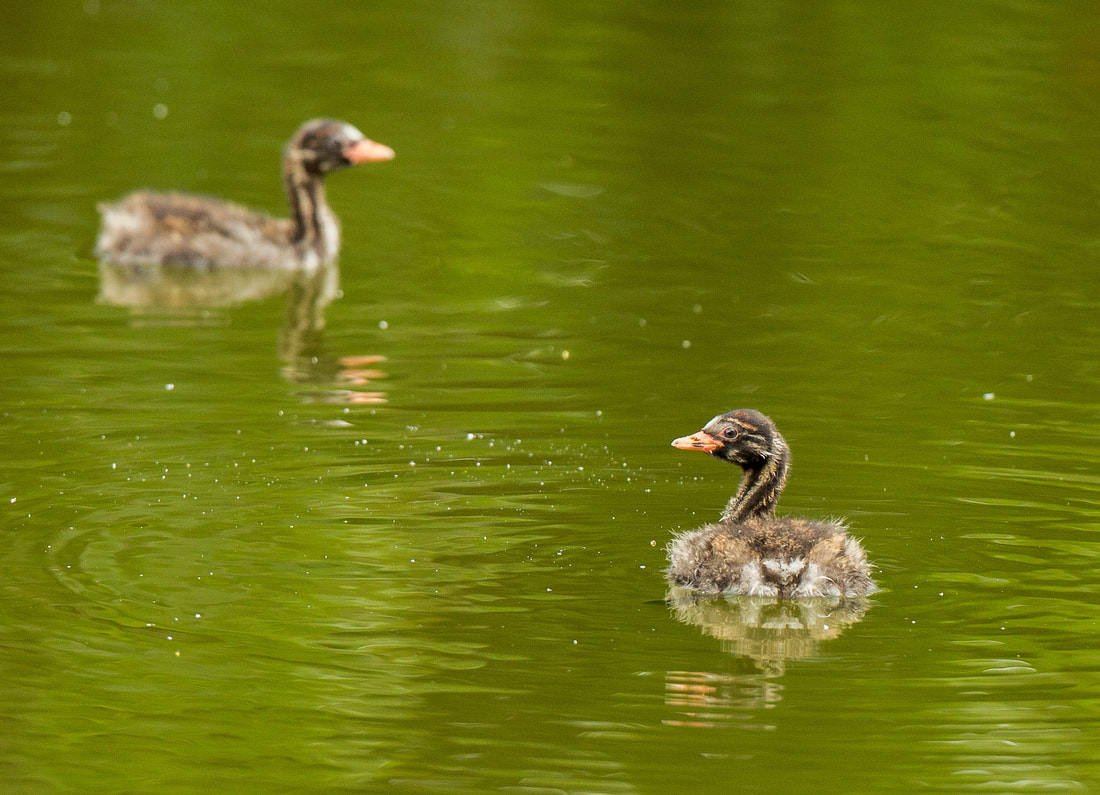 Little Grebe chicks at Mai Po in summer (Birding Hong Kong archive)
A series of low-pressure systems brought unsettled weather to the territory during the first two weeks of the month. For the most part it was cloudy with occasional showers and thunderstorms. Temperatures were in the high 20s/low 30s. On 11th a tropical depression (later named Tropical Storm Koguma) formed 500 km southwest of Hong Kong and the first tropical storm signal of the season was raised but it didn't go higher than T1.

Pacific Swifts were noted as follows: seven at Tai Mo Shan on 6th, three at Robin’s Nest on 7th, and one at Po Toi on 8th with two there on 9th.

Single Lesser Cuckoos were heard at Tai Mo Shan on 3rd & 5th, Tai Lam CP on 6th and Tai Po Kau on 7th & 13th. An Oriental Cuckoo was photographed at Mai Po on 8th. This is a new late date, the previous latest date being 21 May, which has led to speculation that the bird might in fact be a Himalayan Cuckoo Cuculus saturatus. This species breeds in southeastern China but has not yet been recorded in Hong Kong. A Common Cuckoo was heard at the Tan Shan Valley on 13th. This will be the 3rd Hong Kong record if accepted.

Two Slaty-legged Crakes were at Tsung Yuen Ha on 7th. A Slaty-breasted Rail was on the scrape at Mai Po on 13th.

Fifty-five Black-winged Stilts were counted at Mai Po on 6th, and on the scrape on 11th many young stilts were noted, ranging in size from recently-hatched to fully fledged birds. Non-breeding shorebirds lingering at Mai Po included 171 Pied Avocets on 12th, 21 Greater Sand Plovers on 6th, 102 Eurasian Whimbrels on 8th, 33 Grey-tailed Tattlers on 6th, five Nordmann’s Greenshanks on 6th with one there on 12th & 13th, and two juvenile Oriental Pratincoles on 6th. The bird that attracted most attention, however, was a Little Curlew present from 11th to at least 13th. This is a new late spring date for this scarce species, the previous latest record being 2 June.

The passage of Short-tailed Shearwaters continued off Po Toi with counts of six on 9th and three on 10th. These are new late dates, the previous latest being 3 June. Additionally at Po Toi, a Lesser Frigatebird was seen on 10th and an adult Brown Booby was there on 9th. The latter is the 14th Hong Kong record. Two Lesser Frigatebirds were also reported from Tap Mun on 3rd.

Nine Black-faced Spoonbills were still at Mai Po on 6th, and at least three remained on 11th & 12th. Single Cinnamon Bitterns were at Nam Sang Wai on 12th and Mai Po on 13th, and single Malayan Night Herons were at Lam Tsuen on 6th and Sha Lo Tung on 13th. . Late Chinese Egrets were at Po Toi on 6th and Pak Nai on 13th.

A Black-winged Kite was at Ta Kwu Ling on 5th, and one was at Mai Po on 6th with two there on 12th, and one again on 13th. An adult Bonelli’s Eagle was photographed in the centre of Sheung Shi on 5th - see http://www.hkbws.org.hk/BBS/viewthread.php?tid=30091 , and three were at the Tan Shan Valley on 13th; at least two of these were non-adults.

An Oriental Reed Warbler was singing in the boardwalk mangroves at Mai Po on 6th & 8th.

A Chinese Babax (Cat IIC) was at Tai Mo Shan on 7th. Also at Tai Mo Shan, 15 Vinous-throated Parrotbills were seen on 3rd and ten were there on 5th.

Black-naped and Roseate Terns in Sai Kung harbour, 21 June 2021.
Most of the period was affected by southwesterly winds, which brought an unsettled mix of showers, thunderstorms and sunshine. Temperatures were up to 34⁰C from 17th – 21st. The showers became heavier from 22nd onwards, and a Black Rainstorm Warning was issued for the first time this year on 28th. It became hot again at the very end of the month.

The birding highlight was a Brown Noddy near Sai Kung on 20th. Tern species that breed on offshore islands in the territory were also reported closer to land in Sai Kung harbour and in the waters between Cheung Chau, Lantau and Central. A few migratory terns along with a handful of other seabirds were noted off Po Toi. There was a small passage of Himalayan Swiftlets on 24th & 25th. Details below:

Single Lesser Cuckoos were heard at Tai Mo Shan on 20th, Tai Lam CP on 21st, and at Chung Pui (Bride’s Pool Road) on 25th. Four were at Tai Lam CP on 27th.  A Red-Collared Dove at Po Toi on 25th was a new late date, the previous latest being 14 June.

The Grey-headed Swamphen was again at Fung Lok Wai on 14th. A Slaty-breasted Rail was on the scrape at Mai Po on 22nd. A female Watercock was seen at Po Toi on 25th.

A Pheasant-tailed Jacana in non-breeding plumage was seen at Mai Po on 19th. Amongst the lingering waders at Mai Po were thirty Black-tailed Godwits on 22nd and two Nordmann’s Greenshanks on 25th. Five Oriental Pratincoles were at Mai Po on 17th, and six (two adults, four juveniles) were there on 22nd.

Ten Black-faced Spoonbills remained at Mai Po on 22nd. Single Cinnamon Bitterns were at Tai Sang Wai/Lut Chau on 18th and at Nam Sang Wai on 29th. A Malayan Night Heron was at Lam Tsuen on 14th.

Five Vinous-throated Parrotbills were at Tai Mo Shan on 20th. Sightings of Indochinese Yuhina consisted of four at Tai Lam CP on 21st and 20 at Kadoorie Centre on 23rd.

Three Orange-headed Thrushes were at Tai Lam CP on 20th and one was there on 21st & 27th. A juvenile White-rumped Shama (Category III) was at Shing Mun on 18th. Two Brown-breasted Flycatchers were at Tai Po Kau on 21st. Five Plain Flowerpeckers were at Tai Po Kau on 27th.
********************
Please note that these are unchecked reports. Records of rarities and of unseasonal occurrences may be subject to assessment by the HKBWS Records Committee. A checklist showing species  for which a description is required can be found at the HKBWS website - http://www.hkbws.org.hk/BBS/viewthread.php?tid=28893&extra=page%3D1
All images & text © David Diskin unless otherwise stated
dadiskin@netvigator.com