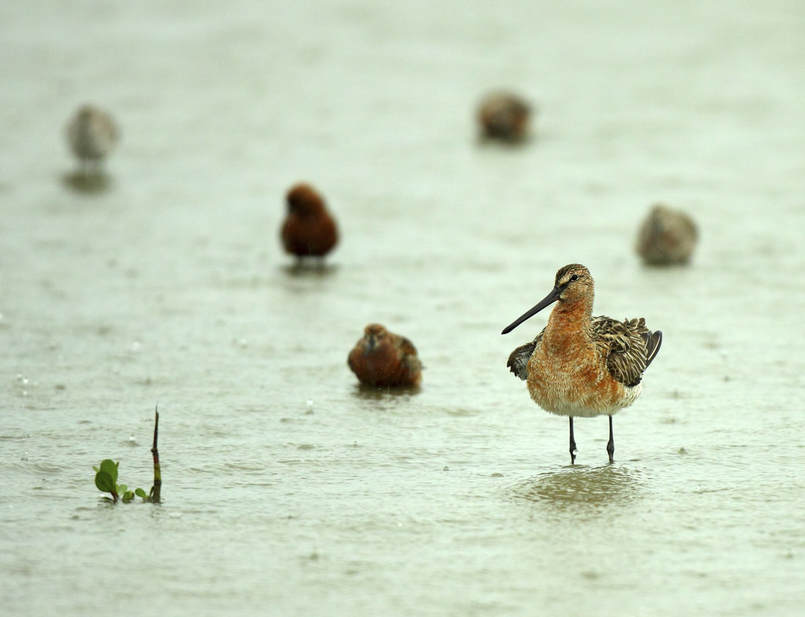 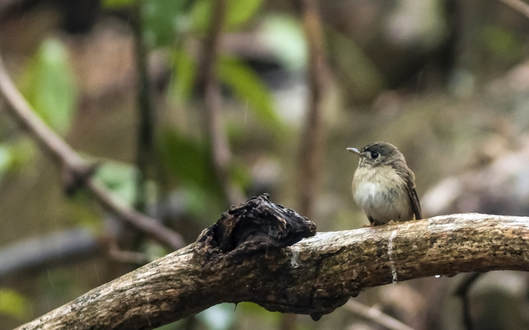 Brown-breasted Flycatcher, Po Toi, April 15 2018
The burst of the northeast monsoon on 8th & 9th was short-lived. The weather soon became hot again with temperatures rising to 30⁰C on 13th & 14th. South-easterly and southerly winds brought an increase in the humidity but there was no rain. That changed on 15th when a cold front brought thunderstorms and heavy showers, along with fresh north-easterly winds and a fall of temperature to below 20⁰C.

Overall, the northwest New Territories proved good for migratory water birds, but migration of other species through Hong Kong, especially passerines, was very poor – indicative of the disturbing decline in the number of birds moving through the territory in spring compared with when I first arrived here in the 1990s.

There were plenty of shorebirds at Mai Po during the week, the highlight being sightings of the critically endangered Spoon-billed Sandpiper on 9th, 12th (two different birds) & 13th. Other waders included 24 Asian Dowitchers and  three Nordmann’s Greenshanks on 8th, one or two Little Stints from 9th – 14th, with four there on 15th, 3000 Curlew Sandpipers on 9th, Pectoral Sandpiper on 10th & 11th, and eight Far Eastern Curlews and 22 Bar-tailed Godwits on 12th.

Other reports from  Mai Po included the Greater White-fronted Goose on the scrape and a Saunders’s Gull on the mud flats, both  on 8th and 14th.  A  Swinhoe’s Egret was noted from 10th - 14th. Four Little Terns were present on 12th with two on 13th & 14th. On 13th, the reed bed used by one of the ringing groups turned up Eastern Water Rail, Bluethroat and  five Siberian Rubythroats, along with the long-staying Black-backed Swamphen and Baikal Bush Warbler. Two Cinnamon Bitterns, four Blue-tailed Bee-eaters and a Styan’s Grasshopper Warbler were seen on 14th. A Styan’s Grasshopper Warbler (the same as 14th?) was also present on 15th.

A Cinnamon Bittern was at the Wetland Park on 9th.

The cold front on 6th brought migrants to Po Toi as detailed in the section above - there was late news of a Malayan Night Heron there on 7th. Birds present on 8th included Grey-faced Buzzard, Besra, Common Kestrel, Swinhoe’s Minivet, Ashy Minivet, Ferruginous Flycatcher and two Japanese Yellow Buntings. The island was quieter during the week: the two Japanese Yellow Buntings were still present on 10th and five Pacific Swifts were seen on the same day. Two Ashy/Swinhoe’s Minivets were seen on 10th & 12th. A Brown-breasted Flycatcher - the 1st record of this species for the island -  was the only migrant of note on 15th.
Reports from elsewhere included Slaty-backed Forktail, Speckled Piculet, Two-barred Warbler and  five Hainan Blue Flycatchers at Shing Mun on 9th; Speckled Piculet, Eastern Crowned Warbler and  five Yellow-browed Warblers at Shek Kong catchment on 10th; a Hodgson’s Hawk Cuckoo at Lam Tsuen on 10th; a Chinese Barbet singing at Kap Lung on 11th; an Ancient Murrelet at Wang Chau, Sai Kung on 13th (with a late record of one near Lantau on 7th); a Two-barred Warbler and an Eastern Crowned Warbler at Tai Po Kau on 14th; a male Amur Falcon near Wu Kau Tang  (3rd spring record) on 14th; and a Greater Crested Tern in southern waters on 15th.
April 16-22 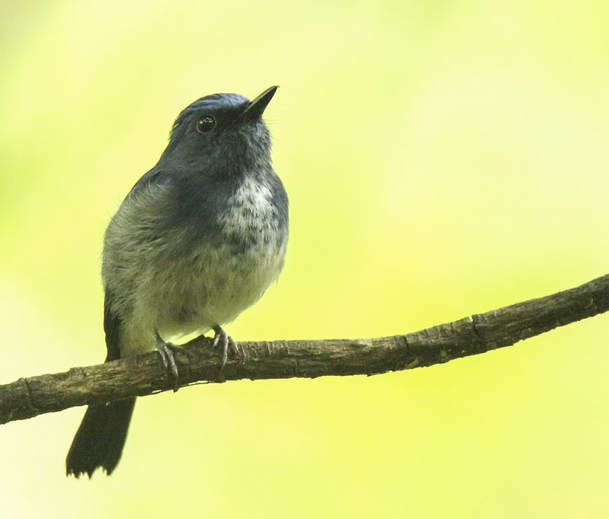 Hainan Blue Flycatcher at Tai Po Kau in spring (archive photograph)
The northeast monsoon persisted on 16th & 17th, bringing rain and north-easterly winds to the territory. The rest of the week saw a  gradual increase in temperature to a high of 30⁰C on 22nd; it was generally humid and cloudy (although with plenty of sunny intervals) and the winds were from the east.

At Mai Po there were reports of the Greater White-fronted Goose (16th – 21st),  Swinhoe’s Egret (19th – 21st), Little Curlew (16th, 18th, and19th - 21st -  a flyover bird in Deep Bay on 18th presumably being a different individual to the one on the scrape on the other days),  and Spoon-billed Sandpiper (19th & 21st). Other records of interest concerned  Cinnamon Bittern on 16th, Little Stint and three Oriental Pratincoles on 18th, 390 Gull-billed Terns, Eastern Water Rail, eighteen Blue-tailed Bee-eaters, Ashy Minivet and Baikal Bush Warbler on 18th, 21 Asian Dowitchers, Nordmann’s Greenshank and Styan’s Grasshopper Warbler on 19th, and a Japanese Quail along the access road on 20th & 21st.

On 21st, a Chinese Bamboo Partridge was heard calling in the Pat Sin Leng range of hills near Tai Po. This species is thought to occur no further south in Guangdong province than Luofushan, which is nearly a 100 km north of Shenzhen. The very occasional Hong Kong reports are considered to refer to escaped/released birds.

Aleutian Terns in southern waters of Hong Kong, 28 April 2018
A cold front moved through on 24th bringing northerly winds and some rain. From 26th onwards, it was generally warm, humid and overcast with easterly winds and temperatures ranging from 23 - 28⁰C.

On 24th, an  Oriental Dollarbird was on Cheung Chau and a Brown Shrike was in Kowloon Park.

There was a small influx of Grey-streaked Flycatchers on 28th; apart from the four birds at Ho Man Tin, two were at Shek Kong catchment, four were in Tai Po Kau Park and one was at Lam Tsuen.