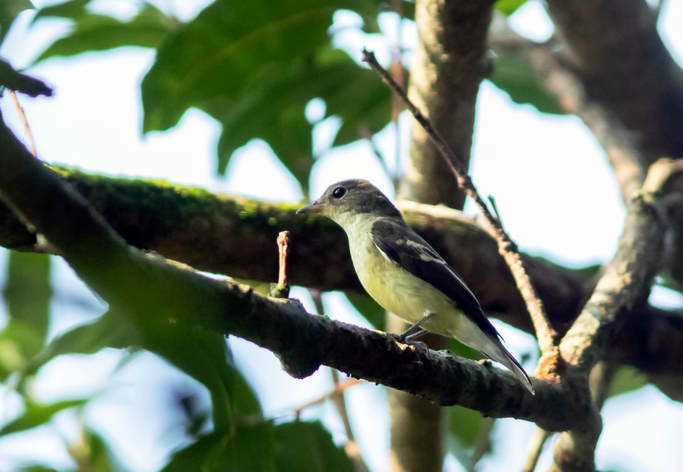 Yellow-rumped Flycatcher at Lau Shui Heung, 5 September 2018 (record photograph)
LATEST SIGHTINGS - September 2018
September 1-9
Hot and showery with southwesterly winds until 7th, after which there was a slight surge  of the northeast monsoon on 8th & 9th; temperatures fell below 30⁰C (just) but it did not feel particularly autumnal.

On 1st and 2nd, at least 29 species of shorebird were recorded at Mai Po, highlights being five Asian Dowitchers and 18 atrifrons Lesser Sand Plovers on 1st. Other birds on 1st included two Garganeys, two Gull-billed Terns and the over-summering Mongolian Gull (now reclassified as a race of Vega Gull Larus vegae mongolicus in line with IOC taxonomy). On 2nd, the five over-summering Black-faced Spoonbills were on the mud flats, as were an  Asian Dowitcher, at least four atrifrons Lesser Sand Plovers, and the Mongolian Gull. The Mongolian Gull was present on  the scrape during the high tide period on 9th. Also noted on 9th were two Northern Shovelers, three Eurasian Teals and five Garganeys. Six Red Turtle Doves were also seen. 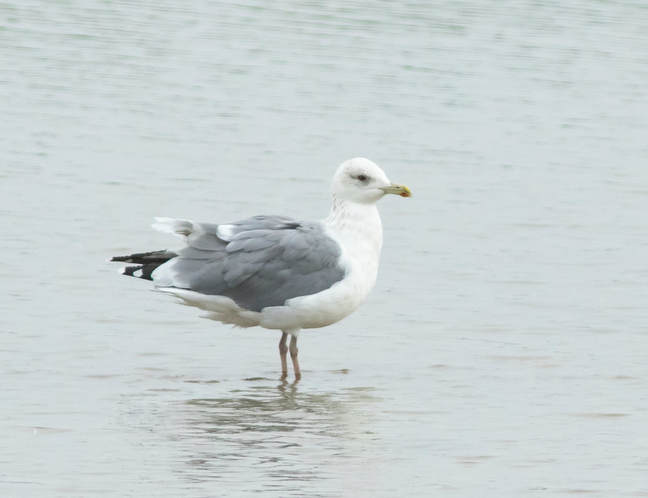 Two Eurasian Hobbies were at Lam Tsuen on 2nd.

On 7th, the first Siberian Blue Robin of the autumn was seen at Tai Po Kau. An Eastern Crowned Warbler was also present.

In addition, a juvenile Long-tailed Skua was photographed over Shenzhen on 4th – see http://www.hkbws.org.hk/BBS/redirect.php?tid=27580&goto=lastpost#lastpost .
September 10-16 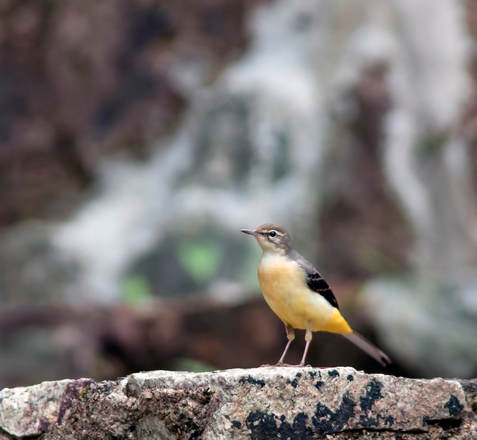 Grey Wagtail at Lau Shui Heung, 12 September 2018
Hot, hazy and humid conditions for most of the week. Tropical Cyclone Barijat passed south of Hong Kong on 12th as it headed west. The T3 signal was raised but the storm’s passing was barely perceptible. That was not the case with Severe Typhoon Mangkhut which had swept across the Pacific during the week, causing severe damage to Guam and north Luzon before entering the South China Sea late on 15th. Subsiding air in front of the storm caused the temperature to reach 35⁰C during the day on 15th, but the 16th brought gale-force winds and heavy rain to south China. Hurricane signal 10 (the highest) was raised in the morning. The storm passed closest to Hong Kong – 100 km to the south – during the afternoon, causing flooding in some areas, felling trees, damaging buildings, disrupting power supplies etc. All in all, probably  the nastiest typhoon I’ve experienced in Hong Kong.
Ho Man Tin was birded by several people on a daily basis from 10th – 15th and turned up most of the migrants that you might expect to occur in Hong Kong in mid-September. Birds included Black-winged Cuckooshrike (11th), Tiger Shrike (10th-12th, 15th), Brown Shrike (daily; max. three on 11th), Black-naped Oriole (14th, 15th), Eastern Crowned Warbler (11th, 12th, 15th), Pale-legged/Sakhalin Leaf Warbler (daily; max. four on 11th), Arctic Warbler (daily; max. six on 12th), Brown-chested Jungle Flycatcher (12th), Dark-sided Flycatcher (11th), Grey-streaked Flycatcher (13th), Asian Brown Flycatcher (up to two daily), Hainan Blue Flycatcher (11th, 12th), Orange-headed Thrush (12th, 13th) Siberian Blue Robin (two on 11th & 13th; singles on 14th, 15th) and Yellow-rumped Flycatcher (daily 11th-15th).

Thirty Whiskered Terns were at Tai Sang Wai on 11th.

An Arctic Warbler and a Yellow-rumped Flycatcher were at Tai Po Kau on 15th.

Finally, on 16th, before the full force of  Mangkhut was felt in the territory, c. 2000 Red-necked Phalaropes were seen close to shore at Clearwater Bay; this is the second highest count on record, the first being 2,490 moving northeast off Po Toi in two hours on 5 April 2012. Later in the afternoon, a few waders were brought down in the flat area at She Shan in the Lam Tsuen valley: a Lesser Sand Plover, two Kentish Plovers, a Pintail/Swinhoe’s Snipe, 20 Green Sandpipers, ten Wood Sandpipers and an Oriental Pratincole.
* Pale-legged Leaf and Sakhalin Leaf Warblers are impossible to separate on plumage in the field. Currently, the only way to identify them is on call. They both give a fairly distinctive  “chink” note which is often repeated. The calls are very similar but that of Pale-legged Leaf Warbler is higher pitched than that of Sakhalin Leaf Warbler – over 5,000 Hz for Pale-legged Leaf Warbler but under 5,000 Hz for Sakhalin Leaf Warbler (mean 5729.29 +/- 77.23 Hz for Pale-legged Leaf, 4786.58 +/- 191.08 Hz for Sakhalin Leaf)#.  This difference may or may not be audible in the field depending on the observers’ experience and/or their “musical” ear. To ascertain the pitch of the call I record it on my iPhone in the field and then transfer the sound file on to my computer once I’m back home. Free software (such as Ravenlite) is available for download on the internet and this can generate a sonogram showing the frequency of the call. 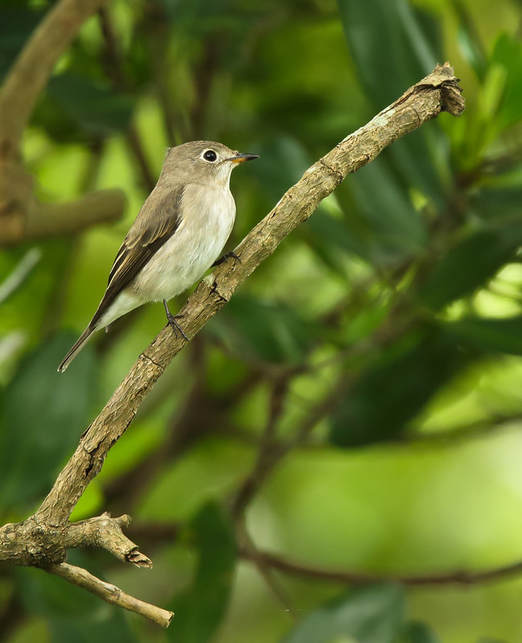 Asian Brown Flycatcher at Mai Po in September (archive image)
The 17th dawned wet and windy after the passage of Typhoon Mangkhut, which proved to be the strongest storm to hit the territory since records began fifty years ago. The remainder of the week proved to be fine and very hot with temperatures reaching 33⁰C  on 22nd.

Mangkhut blew down at least 17,000 trees throughout Hong Kong and many of the ones still standing look shredded and forlorn. Many country park trails remain inaccessible and Mai Po is closed until next week so the paths can be cleared and the hides repaired.

In the aftermath of the storm, a dead Streaked Shearwater was found near High Island and an injured bird was picked up by the SPCA in Tseung Kwan O. Apart from that, there wasn’t much evidence of storm-blown seabirds apart from a scattering of Red-necked Phalaropes on the coast and inland, and a few terns (Black-naped, Little, Bridled and Whiskered) offshore.

There was some discussion about the effect on the storm on land birds with some observers suggesting that Chinese Bulbuls in particular had become much scarcer in their local areas. Whether this is a result of high levels of mortality or whether the birds have moved to other areas in search of shelter and food is difficult to know for sure.

Other records of interest by date as follows:

On 18th, single Japanese and Amur Paradise Flycatchers were at Shek Kong catchwater. Mai Po had Cinnamon Bittern, Eastern Marsh Harrier and  two Yellow-breasted Buntings. Po Toi – which was hard hit by the typhoon; many buildings damaged, a number of trees down – had, in addition to the migrants mentioned above, Black-naped Oriole, Yellow-browed Warbler, Dusky Warbler, Eastern Crowned Warbler and Grey-streaked Flycatcher.

A Dark-sided Flycatcher was at Tai Lam CP on 23rd. 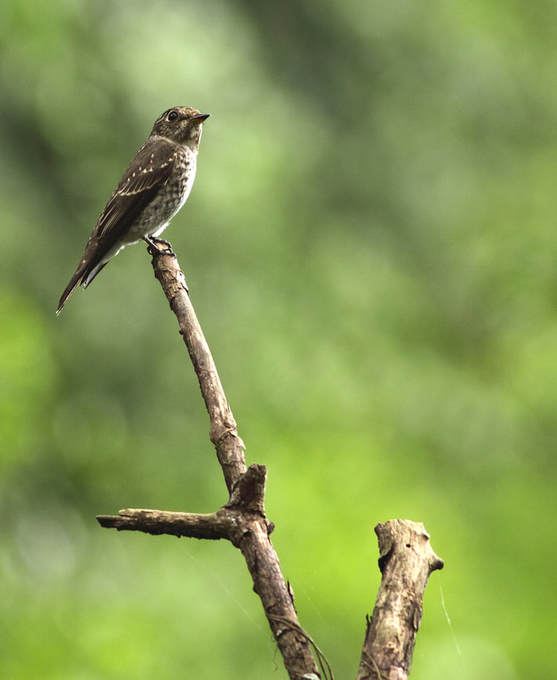 Dark-sided Flycatcher at Lung Fu Shan in September (archive image)
September 24-30
The weather was generally fine and sunny with the northeast monsoon dominating from 26th. Early mornings felt cool and fresh, but the freshness soon gave way to temperatures of over 30⁰C. It was still hard work out in the field in the middle of the day.