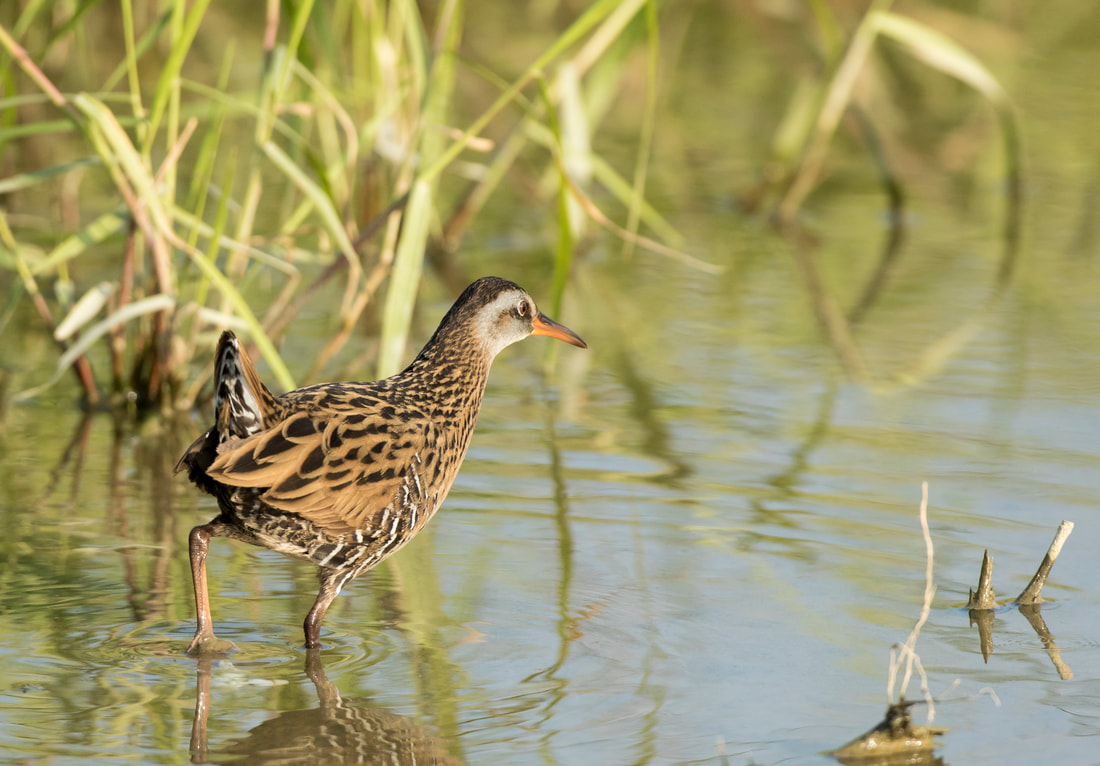 Eastern Water Rail, Long Valley, (Birding Hong Kong archive)
November began as October ended, with a good spread of migrants throughout the territory.  Typhoon signal number 3 was raised on 1st as Tropical Cyclone Yutu passed to the southeast of Hong Kong, but this had no significant effect on south China and the signal was dropped on 2nd. The  northeast monsoon continued to dominate; it was cloudy with some light rain on 3rd & 4th, and temperatures fell to the low twenties in the northern New Territories.

Observations of note as follows:

The Pallas’s Reed Bunting was still at San Tin on 4th. The female Mandarin Duck remained at least till 3rd, and a Chinese Spot-billed Duck was seen on 3rd & 4th. The single remaining Red-necked Phalarope was last seen on 1st. Birds seen at the fish ponds on 3rd included a Eurasian Spoonbill, 30 Black-faced Spoonbills, the female Common Pochard, a Japanese Quail, two Grey-headed Lapwings, a Eurasian Wryneck, and a Bluethroat. Additional birds on 4th included a female Greater Scaup, a Pied Harrier, two Oriental Pratincoles, a Eurasian Skylark, three Common Starlings, and a Black-headed Bunting (same as 28 October).

A Brown-breasted Flycatcher was at Ho Man Tin on 31 October. The same site produced a Bull-headed Shrike on 1st & 3rd, a female Narcissus Flycatcher and a  Radde’s Warbler on 1st, and a White’s Thrush and Fujian Niltava on 2nd.

A female Narcissus Flycatcher, two Yellow-throated Buntings, two Chestnut Buntings and five Tristram’s Buntings were at Po Toi on 1st. A Japanese Yellow Bunting was seen there on 3rd.

An Eastern Crowned Warbler and a  Sulphur-breasted Warbler were at Tai Po Kau on 3rd.

A Blue-tailed Bee-eater (a new latest date by three days) and a  Yellow-browed Bunting were at Pak Nai on 4th. 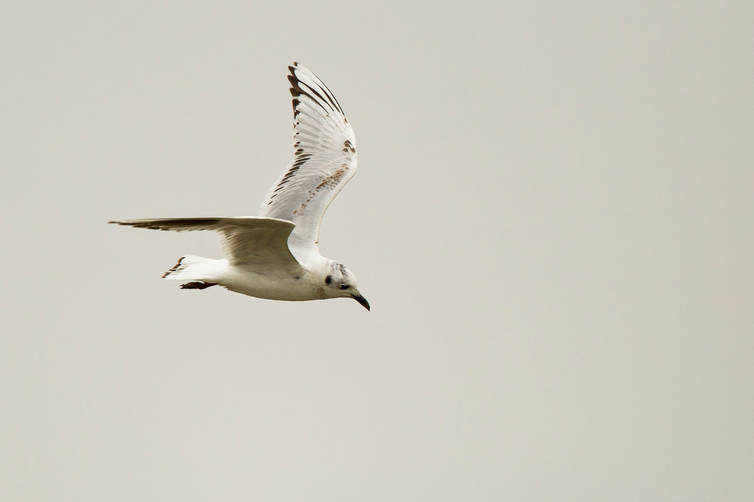 A Eurasian Sparrowhawk was at Mai Po on 5th & 6th. Out on the mud flats, the European Golden Plover was still present on 11th, and up to five Saunders’s Gulls were noted from 6th. A 2nd-winter Mongolian (Vega) Gull  was seen on 7th. Sixty Lesser Sand Plovers were noted on 9th & 10th. A Far Eastern Curlew was with the flock of Eurasian Curlews on 10th. A Pale-footed Bush Warbler trapped by the ringers in a reed bed on 6th is the 10th Hong Kong record. Twelve Grey-capped Greenfinches were present along the casuarinas on 7th. The first Eastern Imperial Eagle of the season – an adult – flew over the reserve on 8th. A Greater Spotted Eagle was present on the same day, as was the first Northern Lapwing of the autumn. A Gadwall was seen on 9th, four Chinese Spot-billed Ducks and 40 Chinese Penduline Tits were present on 10th, and two Common Pochards were noted on 11th. The lugens White Wagtail and a Black-headed Bunting were along the Mai Po access road on 6th.

Yellow-breasted Buntings (ten on 8th), Chestnut-eared Buntings (ones and twos) and a Black-headed Bunting continued to be seen at Long Valley. The Eastern Water Rail remained throughout the week. A Japanese Quail and three Grey-capped Greenfinches were seen on 5th. A Japanese Sparrowhawk was seen on 8th, and a Buff-bellied Pipit was seen on 10th.

A Eurasian Sparrowhawk was reported from Ho Man Tin on 6th, but the best bird at this location was a Red-backed Shrike on 9th. If accepted this would be the 7th record for Hong Kong; interestingly, the first record in early October 2008 was also at Ho Man Tin.

Two juvenile Greater White-fronted Geese were reported from Yi O, Lantau on 7th (although only one was photographed).This is the first time that this rare species has occurred away from the Deep Bay area. Ten Chinese Penduline Tits were at Yi O on 10th.

At San Tin, the Chinese Spot-billed Duck remained throughout, although the Greater Scaup was last seen on 9th. Six Whiskered Terns were present on 5th, a Japanese Quail, three Common Starlings and a  Chinese Grosbeak were seen on 8th and a  Greater Spotted Eagle and Pied Harrier were noted regularly to 9th. A Japanese Sparrowhawk was seen on 10th. An Eastern Imperial Eagle, 11 Common Starlings and  nine Yellow-breasted Buntings were reported on 11th.

Of two Ashy Drongos at Tai Po Kau Park on 8th, one was typical pale leucogenis but another was a salangensis type, being considerably darker although with a similar facial pattern to leucogenis.

A Yellow-streaked Warbler was found at Tai Lam CP on 11th. This is only the 8th record since 1999; six of those have been of birds taken out of mist nets at Mai Po.

At Tai Po Kau, a Grey Nightjar, an Eastern Crowned Warbler, a Goodson’s Leaf Warbler  and a Brambling were seen on 11th.
November 12-18
Generally cloudy and humid conditions with winds from the east and temperatures in the low to mid-twenties. Plenty of pollution too.  Rare birds continued to turn up, the best of which was a Japanese Leaf Warbler  at Po Toi on 17th. Birds of note by species as follows:

Mandarin Duck: one (presumably the same female as noted previously) at San Tin on 15th
Chinese Spot-billed Duck: one at San Tin until at least 17th
Common Pochard: the long-staying bird was joined by a  second bird on 17th
Greater Scaup: two at HK Wetland Park on 13th, with one still there on 15th
Japanese Quail: singles at Mai Po on 12th, and San Tin on 12th, 14th & 17th
Black-winged Kite: one at Mai Po on 12th
Japanese Sparrowhawk: singles reported from Mai Po on 12th, the Peak on 13th and Po Toi on 18th
Eurasian Sparrowhawk: a female reported from Long Valley on 15th
Slaty-legged Crake: one very approachable bird in Hutchison Park near Whampoa from 16th to at least 18th
Eastern Water Rail: one at Long Valley at least until 18th
Ruddy-breasted Crake: one at Long Valley on 15th
Grey-headed Lapwing: 12 at Kam Tin River on 17th
Barred Cuckoo Dove: one at Lok Ma Chau on 16th; the 11th Hong Kong record
Chinese Penduline Tit: 50 at Mai Po on 16th
Eurasian Skylark: one at Long Valley on 13th & 15th
Hume’s Leaf Warbler: one singing at HK Wetland Park on 14th
Eastern Crowned Warbler: singles at Ho Man Tin on 13th, Tai Po Kau on 14th & 16th, and Shek Kong catchwater on 17th
Pale-legged/Sakhalin Leaf Warbler: the only reports were of singles  at Shek Kong catchwater on 14th and Ho Pui Reservoir on 18th
Japanese Leaf Warbler: one was at Po Toi on 17th & 18th; if accepted, this will be  only the 3rd Hong Kong record of a species that was split from Arctic Warbler nine years ago
Sulphur-breasted Warbler: one at Tai Po Kau on 14th
Goodson’s Leaf Warbler: one at Kap Lung on 14th; a Goodson’s/Claudia’s Leaf Warbler was seen at Kap Lung on the same day
Eyebrowed Thrush: reported from several sites, highest count being six at Ho Man Tin on 16th
Mugimaki Flycatcher: singles at Po Toi on 13th, and Ho Pui Reservoir and Tai Lam CP on 18th
White-throated Rock Thrush: one at Tai Lam CP on 16th
House Sparrow: a female at Long Valley from 12th until at least 17th; the 5th Hong  Kong record
Brambling: one at Mount Davis on 17th
Tristram’s Bunting: four at Mount Davis on 17th
Yellow-breasted Bunting: 20 at Long Valley on 13th, with 16 there on 17th
Black-headed Bunting: one reported from Long Valley on 17th.

There were also records of two potential “firsts” for Hong Kong – a Chinese Great Grey Shrike at Lok Ma Chau on 14th and an Asian Glossy Starling at Po Toi on 17th. Unfortunately, both showed signs of feather-damage and were judged to be  ex-captive birds.
November 19-25 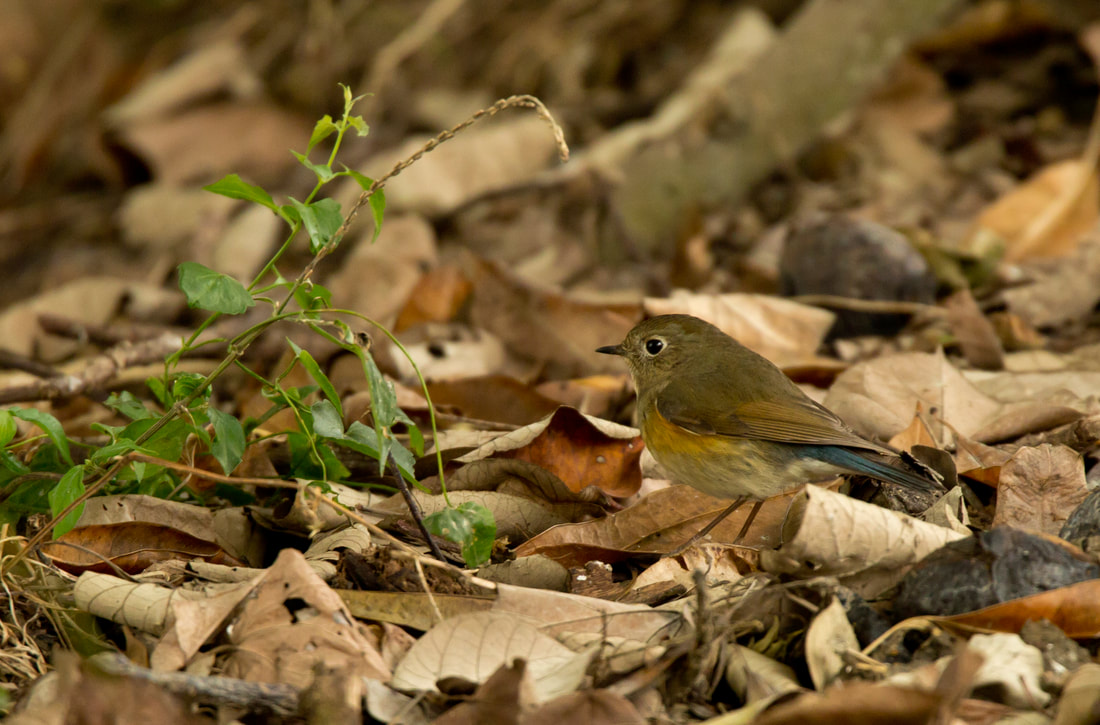 Red-flanked Bluetail, Mai Po, (Birding Hong Kong archive)
A mild northeast monsoon persisted, bringing morning temperatures down to 18⁰C on 22nd and 23rd. Rain fell on 25th due to the influence of Tropical Cyclone Usagi situated close to  southern Vietnam, and afternoon temperatures in several areas fell to below 17⁰C.

Ducks at the Wetland Park included up to three Greater Scaups from 21st-25th, and a Common Pochard and a hybrid American x Eurasian Wigeon on 25th.

A Rook seen briefly at Long Valley on 19th will be the second HK record if accepted. The Eastern Water Rail was noted again on 20th and the highest count of Yellow-breasted Buntings during the week was of 22 on 22nd. The 25th proved productive at the fields with a Eurasian Skylark, a Brambling, two Rustic Buntings and  three Chestnut-eared Buntings among the birds recorded.

A Plumbeous Water Redstart was at Chung Mei on 19th.

On 21st, a Greenish Warbler was reported from Shek Kong catchwater (potentially the 3rd or 4th HK record), along with Black-naped Monarch, Verditer Flycatcher and  two Chinese Grosbeaks.

A Eurasian Jay was at Sha Lo Tung on 23rd. This species used to be resident - albeit scarce and local - in the central and northeast New Territories up until the turn of the century, but there have been very few records since then.

A Plumbeous Water Redstart was at Tai Wo nullah on 24th.

On 24th, Mount Davis turned up a White’s Thrush, five Grey-backed Thrushes and  two Chestnut Buntings, and on 25th, a Japanese Thrush, six Grey-backed Thrushes and  two Radde’s Warblers were seen.
November 26-30
Cloudy with rain from 26th to 28th – heavy late on 27th through the night – with cool temperatures. The last two days of the month were contrastingly bright and sunny.

Ornithologically, the month ended with a bang, not a whimper. A 1st-calendar-year Silver Oriole was photographed on Po Toi by three observers on 29th; this will be the first record for Hong Kong if accepted. This species has a disjunct breeding range in China (south-central Sichuan, northeast  Yunnan, Guizhou, north Guangxi and north Guangdong) where it is a summer visitor; it winters in south Thailand and west Cambodia. The fact that it breeds in Guangdong means that it has long been predicted to occur in Hong Kong, although hopes of this actually happening  were perhaps diminishing as it is now listed as Endangered by BirdLife International. Its population is thought to consist of no more than 1,500–3,800 individuals.

A Paddyfield Warbler was heard singing at Lok Ma Chau on 30th. This will be the 13th Hong Kong record if accepted.

The wintering Sulphur-breasted Warbler was again seen at Tai Po Kau on 29th.

A Rustic Bunting was at Long Valley on 27th. Also reported on the same day was a very late Chinese Sparrowhawk; the latest autumn date is currently 19 November.
All images & text © David Diskin unless otherwise stated
dadiskin@netvigator.com