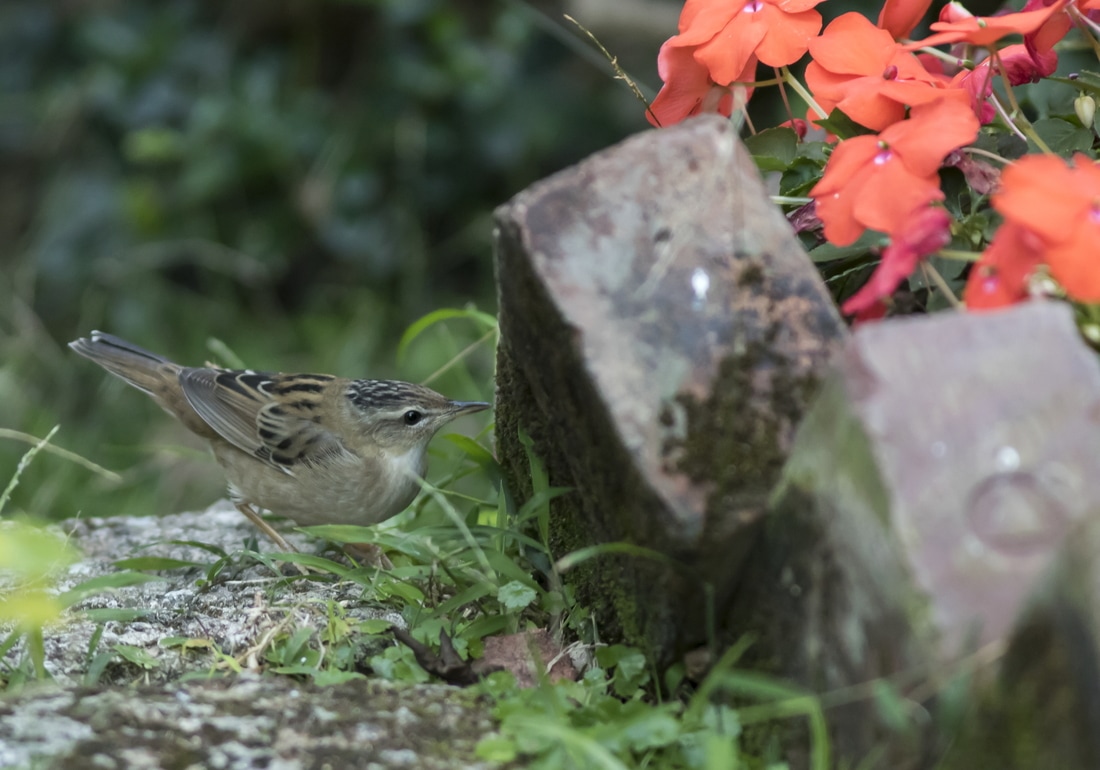 Pallas's Grasshopper Warbler at Kowloon Bay, January 23 2017
LATEST SIGHTINGS - January 2017
January 1-8
The wintering bird population in Hong Kong seems fairly static at the moment although a Gull-billed Tern hunting for crabs over the Mai Po mud flats on the 3rd was a surprise. This is apparently the first winter record of this species, extreme dates being  March 1st – October 20th. It is mainly a spring passage migrant through the territory. Other species out on the mud flats, apart from the usual Black-faced Spoonbills and Saunders’s Gulls, include one to two Pallas’s Gulls (an adult winter and a 3rd-winter bird), and a single winter-plumage Nordmann’s Greenshank. The latter is visible from the southern hide on a 2-metre tide.

The main birds of interest were a number of major rarities staying into the new year after being initially discovered in December 2016. Two Siberian Cranes – an adult and an accompanying juvenile – were first seen at Mai Po  on December 2nd. The birds were present on the following day, but the juvenile disappeared in the late morning. The adult remained  but became more elusive. Then, on December 17th, two adults were seen on the reserve.  Since that date, only one adult has remained in the area and is currently present on pond 16/17. This is only the second record of this endangered crane in HK. The first was a juvenile at Mai Po on December 11th & 12th 2002.

The second rarity was a Buff-breasted Sandpiper discovered at San Tin fish ponds by a member of a HKBWS survey team on December 20th. This was also a second record for Hong Kong, the previous sighting being of one at Mai Po on April 19th 2015. The first bird was  seen only briefly by a small number of bird watchers. The recent bird was much  more obliging as it fed on a couple of drained ponds until January 2nd  and was seen by many observers.

Birders visiting the San Tin area in search of the Buff-breasted Sandpiper turned up a number of other interesting species including Eastern Imperial and Greater Spotted Eagles, Pied Harrier,  the rare Common House Martin, Buff-bellied Pipit  and Hoopoe. The best new discovery, however, was a small Iduna warbler found by Mike Kilburn in trees and shrubs at the entrance to the ponds on December 28th. The bird remained until at least the 4th, becoming more elusive the longer it remained but providing excellent views at the beginning. This enabled it to be pinned down as a Booted  rather than a Sykes’s Warbler. (This was the second HK record of Booted Warbler after one at Mai Po during the 2015/16 winter. There have been three previous records of Sykes’s.)

And finally, Graham Talbot found a Red-headed Bunting at Long Valley on December 30th. This bird proved more elusive than the other rarities but was seen sporadically until at least the 4th. This is, I think, the 7th Hong Kong record.

Additional records of note were a Mandarin Duck at Sha Tin on 6th & 8th  and three Greater White-fronted Geese  (two adults and a juvenile) at San Tin on 5th & 7th.  The latter have been seen on and off in the San Tin - Mai Po area since mid-October 2016.

January 9-15
The adult Siberian Crane continues to frequent the scrape at Mai Po and the Nordmann’s Greenshank is still out in Deep Bay.  Two adult Greater White-fronted Geese were also on the scrape on 12th, seemingly the same birds that have been around since October although there was no sign of the accompanying juvenile. The Mandarin Duck was again seen at Sha Tin on 10th.

A very unseasonal female Amur Falcon was seen in flight at Mai Po on 12th. Other unseasonal records were of an Arctic Warbler at Kai Tak on 9th and one at Ho Man Tin on 10th (present since at least the end of November). These are the first January records and the only mid-winter records since one was seen at  Victoria Barracks (now Hong Kong Park) on December 24-25 1987.

Other long-staying birds reported from urban Ho Man Tin by the local patch-worker who goes under the moniker Starfish included Radde’s Warbler and Bull-headed Shrike.

John Allcock found a male Rufous-gorgeted Flycatcher at Clearwater Bay Country Park on 12th and this was seen again on 14th.

December 2016 was the third warmest December on record and January continued mild until 12th when  a cold front from the north started to bring cool, overcast weather to the territory. Temperatures continued to fall slowly to 13 degrees Celsius on 15th and there were some patches of rain.  However, the gloomy weather did seem to coincide with an increase in bird activity.

On 14th three Common Rosefinches were seen at Shek Kong Airfield Road and on the 15th a Thick-billed Warbler and a male Black-headed Bunting were reported from Ping Yeung. The highlight, however,  was a Japanese Tit discovered by Richard Lewthwaite at Mai Po on 14th. This will be  the 2nd record for Hong Kong - after one at HK Wetland Park in January 2013 - if it is accepted by the HKBWS Records Committee.

Perhaps I should emphasise that all rarities have to be  assessed by the HKBWS Records Committee before they are accepted. In a sense then, many  of the reports here are provisional and not yet part of the official record. There will I think be no problem with Siberian Crane and  Buff-breasted Sandpiper, and there seems to be a general consensus that the potentially controversial Iduna warbler referred to above is Booted and not Sykes’s Warbler. However, some legitimate doubt has recently been raised about the identification of the Red-headed Bunting at Long Valley.  Also good photographs may be needed to show with certainty that the Japanese Tit is “genuine” and not a Cinereous/Japanese hybrid as was considered to be the case with a bird photographed at Shek Kong Airfield Road in December 2012.
January 16th-22nd
The relatively  mild weather continues in what may well turn out to be one of the warmest  Hong Kong winters on record. Birders doing surveys for the Winter Bird Atlas are bemoaning the dearth of thrushes and Red-flanked Bluetails – presumably a result of the temperate conditions. There have been odd reports of Grey-backed, Japanese, Pale and White’s Thrushes but on the wholes this looks like it will be  a “poor thrush winter”. However, a 1st-winter male Siberian Thrush was reported by Karen Barreto at Kap Lung on 20th.

Of interest – and perhaps related to the mild weather – was another unseasonal Amur Falcon (a male this time)  seen at Shui Hau on southern Lantau on 18th by Yann Muzika. A Radde’s Warbler was at Tai O on the same day.

Also on 18th a Black-winged Kite and Eastern Water Rail were seen at Long Valley.

On 19th, another Japanese Tit was reported from Lung Fu Shan. A photograph of this bird can be seen at:   http://www.hkbws.org.hk/BBS/redirect.php?tid=25999&goto=lastpost#lastpost

A Bianchi’s Warbler wintering on Cheung Chau was seen and heard on 20th  by Martin Williams.  This will be the 8th record of this species if accepted.

At Mai Po the wintering Siberian Crane and Pallas’s Gull continue to be reported and two Greater White-fronted Geese are still in the San Tin/Mai Po area. A Pied Harrier was seen at Mai Po on 21st.

Highlight of the week, however, was a Baikal Bush Warbler in an ornamental flower bed surrounded by high-rise buildings at Kowloon Bay. This bird was found and photographed by Kinni Ho on 20th and is still present at the time of writing (23rd). It is the tenth record for Hong Kong. As most of the previous birds were picked up out of mist-nets by ringers at Mai Po, this twitchable individual is proving very popular with birders and bird photographers.

Photographs of the bush warbler can be found at: ﻿http://www.hkbws.org.hk/BBS/redirect.php?tid=26007&goto=lastpost#lastpost ﻿.  Amazingly, there is a wintering Pallas’s Grasshopper Warbler in the same place.

January 23rd-31st
The Siberian Crane and Nordmann’s Greenshank remained at Mai Po to month’s end. However, the birds of most interest during the last few days of the month were a variety of rare warblers.

A bird of the “Lesser Whitethroat” complex, first discovered at Tsim Bei Tsui on 23rd, remained there throughout the period under discussion. However, sightings tended to be brief and the period between sightings long. This is the 4th record of “Lesser Whitethroat” in Hong Kong. Previous records (all singles) were at: Yin Kong on October 7th  2002; Mai Po on October 15th 2006 (trapped) and Lai Chi Kok on January 10th & 11th 2008. Only the second of these records has been ascribed to a definite taxon: DNA analysis of a feather from the bird  confirmed it was from the taxon  blythi.

Expert opinion on the latest bird, based on call, plumage and structure, also indicate blythi: this taxon is currently regarded by the IOC as a subspecies of Lesser Whitethroat Sylvia curruca, but it seems likely that in future it will be given specific status in its own right.

There were reports of Hume’s Leaf Warbler from Hong Kong Island on 25th, Pak Sha O on 28th and Shek Kong catchment on 31st. There were only ten records of this species up to 2012 - and 2013 and 2014  were blank years - but with three records in 2015 and at least two in 2016, these further reports suggest that this species is occurring more commonly than previously thought, although how much this is due to a real increase in numbers rather than a growth in observer awareness is difficult to ascertain.

The Baikal Bush Warbler remained in the flower beds of  the Kowloon Bay housing estate until at least 28th.

Yet another unseasonal Arctic Warbler was at Stanley on 25th. A male Fujian Niltava was photographed at Tai Po Kau on the same day and a White-spectacled Warbler was seen in a bird-wave there around the same period.