The eastern-race Rook (first seen on November 1st 2017) remains at Mai Po although is now wandering to the central part of the reserve. Also present is a single Greater White-fronted Goose, presumably one of the three birds first seen on October 31st 2017. The Smew (first seen on December 21st 2017) is also still on the reserve. Other birds of interest at Mai Po were a 1st-winter Black-tailed Gull on 2nd, a Northern Lapwing on 2nd & 3rd, five Buff-bellied Pipits on 2nd, a Common (Siberian) Chiffchaff near the car park on 3rd (apparently first seen and photographed on December 31st - a different individual from the one trapped and ringed on the reserve on December 30th), two Gadwalls on 3rd, the singing Baikal Bush Warbler on the 4th and seven Chinese Spot-billed Ducks on 6th.

On 1st, a juvenile Northern Goshawk flew west at Pui O. A Rufous-gorgeted Flycatcher and a male Siberian Thrush of the taxon davisoni were seen at Ng Tung Chai. Shing Mun held the Slaty-backed Forktail (first seen on December 23rd 2017),  and two Eurasian Woodcocks and a Pale-legged Leaf Warbler were at Lau Shui Heung.

The Eurasian Hoopoe (present since December 6th 2017) was at San Tin on 2nd.

On 3rd, two Chestnut-flanked White-eyes, and single Mugimaki and  Verditer Flycatchers were at Bride’s Pool.
January 8-14
The period began with the arrival of a cold front from the north, bringing low cloud and rain and causing temperatures in the New Territories to fall to 7⁰C on 9th, the coldest day so far this winter. During the week the weather became dry and sunny with morning temperatures at around 9⁰C rising to 16⁰C during the day.

There was late news of a Black-backed Swamphen at Mai Po on January 7th.

On 9th, the ponds at Lok Ma Chau held the Oriental Stork, a Baer’s Pochard – the first in the territory since 2013 – along with the two Ferruginous Ducks plus a Common Pochard x Ferruginous Duck hybrid. Note that the ponds are privately managed and are inaccessible to the public.

The wintering Rook was seen at Lut Chau on 9th but had wandered to Fung Lok Wai to the west on 10th. Also on 10th, four Eurasian Spoonbills, a Northern Lapwing, a Gadwall and a Verditer Flycatcher were at Mai Po, ten Eurasian Siskins, an Eastern Crowned  Warbler and a Verditer Flycatcher were at Shek Kong catchment, and a Mugimaki Flycatcher was on Cheung Chau. The male and female Plumbeous Water Redstarts were still present on the nullah near Tai Wo MTR station.

On 11th, a 1st-winter Daurian Jackdaw flew over Crest Hill; this is the 12th Hong Kong record. The White-spectacled Warbler was still present at Cheung Chau.

The other female Plumbeous Water Redstart wintering at Tai Wo – this one in Mui Shue Hang park - was still there on 12th. An Ashy Minivet was also in the park; this is only the second winter record of this passage migrant following one at Lau Shui Heung in January 2016. A Dusky Thrush – presumably the same bird as was first seen on December 10th 2017 – was at Pui O. The wintering Smew was at Mai Po.

On 14th, two Oriental Storks flew over Mai Po. Also present on the reserve were the Greater White-fronted Goose and  the Northern Lapwing; the Common (Siberian) Chiffchaff and a Verditer Flycatcher were in trees near the car park. Other long-staying birds seen elsewhere included the Rufous-faced Warbler at  Bride’s Pool, the Small Niltava at Lung Fu Shan, the two Plumbeous Water Redstarts at Tai Wo and the Slaty-backed Forktail at Shing Mun. The latter site also held a Chestnut-flanked White-eye. Three male Grey Bush Chats were at Yi O on Lantau.
January 15-21 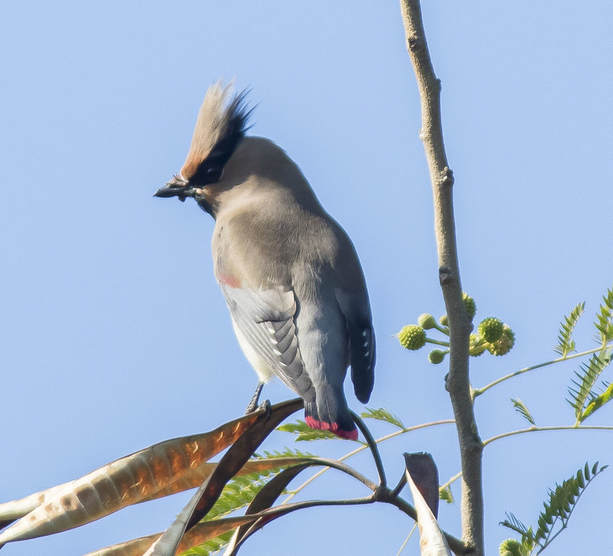 Japanese Waxwing, Shek Kong Airfield Road, 18-1-2018
A warm, generally fine week although with some rain on 19th. Temperatures reached as high as 24 ⁰C in the New Territories.

On 15th the Baer’s Pochard was seen again at Lok Ma Chau and the wintering Oriental Stork was seen flying low over the nearby fish ponds at San Tin. An Oriental Stork, possibly the same bird, was seen later at Mai Po where it remained throughout the week. Other birds elsewhere on 15th included a Rosy Starling at Ma Tso Lung, a Radde’s Warbler and a Bull-headed Shrike at Ho Man Tin, and the White-spectacled Warbler at Cheung Chau.

The Chestnut-crowned Warbler was again present at Lung Fu Shan on 16th. The Bull-headed Shrike was still at Ho Man Tin and a Mugimaki Flycatcher was at Cheung Chau. The flycatcher was seen again on 17th.

A Eurasian Woodcock was at Gilwell Camp, Tate’s Cairn on 17th. Bride’s Pool held the Rufous-faced Warbler, a Black-naped Monarch and a  Goodson’s Leaf Warbler while a male and female Plumbeous Water Redstart were at nearby Chung Mei.
Bird of the week was a Japanese Waxwing found at Shek Kong Airfield Road on 18th. There have only been four previous records of this species in Hong Kong: seven at Lam Tsuen on 5-6 April 1991; five at Shek Wu Wai on 7 February 1997; three at Yin Kong on 20 April 1997 and one at Mai Po on 16 January 2003. The last record was not assigned to category i.e. the Records Committee felt unable to say with certainty whether this individual was genuinely wild or an ex-cage bird. Also present at Airfield Road were a Eurasian Woodcock and a Black-naped Monarch. Unfortunately, the waxwing seems to have been a one-day bird as it was not seen on 19th. Birders did, however, turn up a Thick-billed Warbler and a Common Rosefinch.

On 20th, another Common (Siberian) Chiffchaff was trapped at Mai Po and there was news of another trapped there earlier in the week. This makes at least four different Common Chiffchaffs at Mai Po in the past four weeks; such an influx is unprecedented. 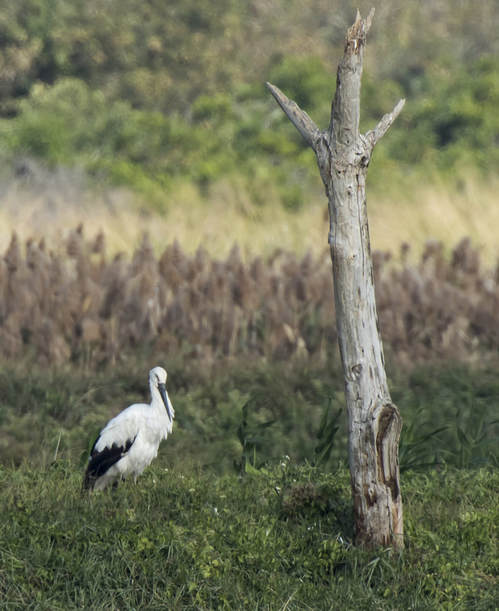 Oriental Stork, Mai Po, 25-1-2018
The end of January was generally mild until the 28th when a surge of the northeast monsoon caused temperatures to fall from 19⁰C  during the day to 10⁰C at night.  The last three days of the month were cold and dismal with some rain that was especially heavy on 31st; temperatures hovered between 7⁰C and 9⁰C in the New Territories.

A Brown-headed Thrush and a White’s Thrush were seen at the Wetland Park on 23rd – notable records in what most observers agree is yet another poor winter for thrushes (and Red-flanked Bluetails) in spite of poor weather to the north.

The bird scene, in fact, seems rather static at the moment, although many of the rare or scarce birds still remain on show, especially at Mai Po where the Greater White-fronted Goose, Smew, Oriental Stork, Black-backed Swamphen, Northern Lapwing and Rook are still regularly seen. Also present are up to two Chinese Spot-billed Ducks and three Gadwalls. Seven Falcated Ducks were seen on 27th. A Black-tailed Gull out on the mud flats on 26th was attacked by a Greater Spotted Eagle.

Elsewhere, an Eastern Water Rail was observed at Long Valley on 25th. Bride’s Pool held 25 Chestnut-collared Yuhinas and a wintering Eastern Crowned Warbler on 27th and a Black-naped Monarch was present there on 30th. Nearby Chung Mei held the wintering male and female Plumbeous Water Redstarts on 27th. Also on 27th the wintering flock of Great Crested Grebes at Starling Inlet totalled 26 birds and the phragmites-covered pond at Nam Chung held 21 Chinese Penduline Tits, which is an uncommon species away from Mai Po.
On 30th, Shek Kong Airfield Road had two Common Rosefinches, four Grey-backed Thrushes and a  Taiga Flycatcher, and the Mui Shue Hang/Tai Wo stretch of the Lam Tsuen River held the three wintering Plumbeous Water Redstarts, two Asian Brown Flycatchers, a Taiga Flycatcher and at least eight Chinese Blackbirds. Of most interest. however,  was an Ultramarine Flycatcher seen in a bird wave at Shek Kong catchment; presumably this is the same bird that  was present a little further east along the catchment between 29 November and 11 December 2017. A Mugimaki Flycatcher was also present in the bird wave.