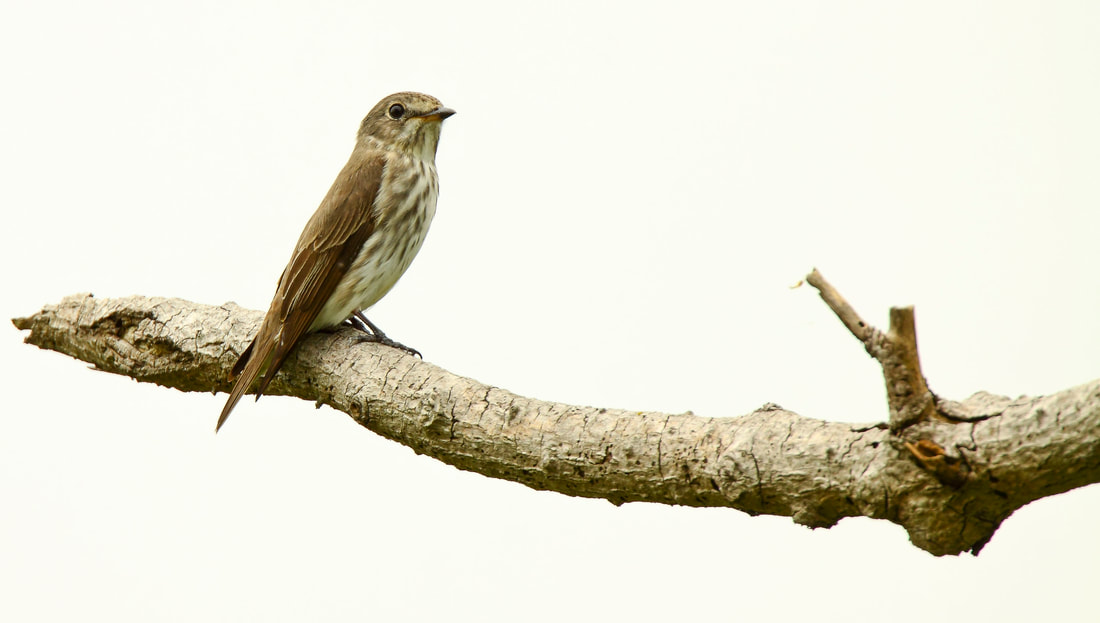 Grey-streaked Flycatcher on spring migration (Birding Hong Kong archive)
May began with unsettled weather. Temperatures did not rise above 28⁰C, and for the most part it was refreshingly cool and cloudy. Rain showers were sometimes heavy and winds were fresh easterlies. Such weather conditions in spring can be good for migrants and early May did not disappoint.

Tai Lam Country Park turned up 170 Eyebrowed Thrushes – a record count - on 3rd, along with an Orange-headed Thrush and the Black-winged Cuckooshrike. A further 165 Eyebrowed Thrushes were seen there on 4th. Nine Hodgson’s Hawk Cuckoo were counted there on the same day – another new high count, the highest previous count being five, also at Tai Lam Country Park,  on 1 May 2017.

The Collared Owlet, a Chinese Barbet and four Plain Flowerpeckers were at Tai Po Kau on 1st.

Two Oriental Dollarbirds and a Grey-streaked Flycatcher were at Sha Lo Tung on 2nd, and a Pechora Pipit was at Tai Sang Wai on the same day.

On 4th, in addition to the records already cited, a Forest Wagtail was on Lamma, two Yellow-breasted Buntings were at Cheung Po, and three Chinese Sparrowhawks, two Oriental Dollarbirds and a Grey-streaked Flycatcher were at Lam Tsuen.

Three Arctic Warblers and four Grey-streaked Flycatchers were at Tai Tong on 5th.
May 6-12 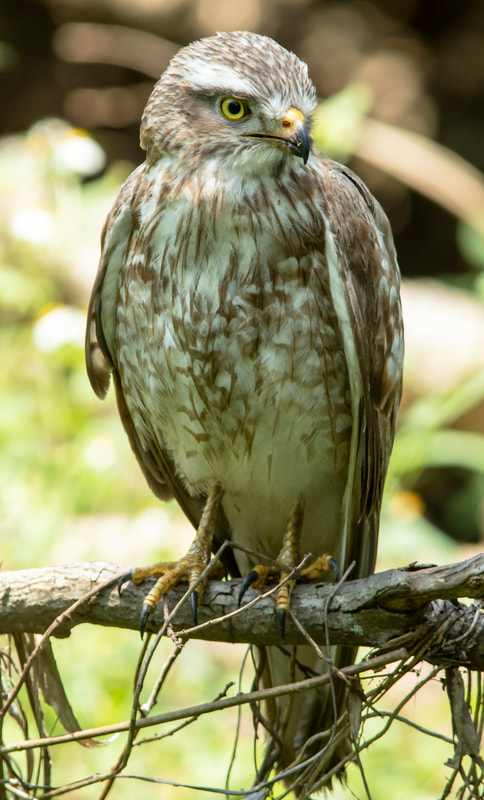 Grey-faced Buzzard on Po Toi, 11 May 2019
Unfortunately this bird was in a poor condition - presumably from exhaustion - and apparently died later in the day.
The unsettled weather continued until the afternoon of 9th, after which conditions improved quickly, the clouds thinned and the temperature rose. Migrant  bitterns  were in evidence and good numbers of typical late spring migrants – Brown Shrikes, Arctic Warblers and Grey-streaked Flycatchers – were widespread. In addition, there were number of sightings of migrants reported on dates later than the previous “latest date” records; these are detailed below. (It should be noted that such records – as with any rare or unusual sightings - may be subject to assessment by the HKBWS Records Committee.)

The hazards of  migration were sadly exemplified at Po Toi on 11 May when a sick and exhausted Grey-faced Buzzard, as well as a Yellow Bittern, apparently died within a short period of being discovered.

On 13th, Tai Lam Country Park turned up a Lesser Cuckoo, a Brown-breasted Flycatcher,  five Grey-streaked Flycatchers and five Black Bulbuls. Also on 13th, a Chinese Sparrowhawk and an Oriental Dollarbird were at Ho Chung, and an Arctic Warbler was on Cheung Chau.

At Mai Po, a Von Schrenck’s Bittern was seen on 13th and a Black Bittern flew across the access road on 17th.

A latish Dusky Warbler was at Ho Man Tin on 16th.

On 20th, a Japanese Leaf  Warbler was reported from Pak Sha O; the identification was based on call. The status of this species in Hong Kong since it was split from Arctic Warbler remains unclear, although it appears to be rare. This will probably be the 3rd or 4th record if accepted.

A Pectoral Sandpiper was at Mai Po on 22nd. Bird present on the reserve on 23rd included a late Tufted Duck, 17 Black-faced Spoonbills, 44 Eastern Cattle Egrets,  three atrifrons Lesser Sand Plovers, an  Asian Dowitcher and five Red Turtle Doves. The Tufted Duck and the spoonbills were present on 24th, as was the Asian Dowitcher among a total of 23 species of waders. Other birds on that date included an Oriental Pratincole and a  Little Tern. On the evening of 26th, a Slaty-legged Crake was heard calling on the reserve – an unusual location for this species.  On 30th, a Middendorff’s Grasshopper Warbler was trapped and ringed in one of the reed beds; this is the eighth record of this species in Hong Kong and the first to be found in spring. A Blue-tailed Bee-eater seen on the same day is a  new late spring record by three days.

Two Brown Shrikes were at Ho Man Tin on 24th.

A Von Schrenck’s Bittern was at Nam Chung on 26th, and a Blue-throated Bee-eater was seen briefly in the same area on 29th. This is only the seventh Hong Kong record of this species and is the first since one at Long Valley on 29 & 30 May 2010.
All images & text © David Diskin unless otherwise stated
dadiskin@netvigator.com